Nothing says “I’m Vegan” like, well, a t-shirt. Literally. You could parade down a busy city street with a megaphone preaching the vegan gospel, but chances are, few people will actually hear what you’re saying, and far less people will actually listen. A t-shirt, however, speaks volumes, no megaphone required. It’s non-confrontational, yet it has the ability to spark engaging and potentially life-altering conversations. Jacky Wasserman, founder and designer of Beet x Beet, an ethical vegan clothing company, understands this concept and has capitalized on its power.

Wasserman launched her company following a career as a freelance graphic designer. She saw a gap in the ethical t-shirt market, as nothing “matched her style.” This was in 2014, prior to the boom in vegan-forward apparel. As she tells it, Beet x Beet was “born from a love of music and food,” and the collections reflect that. They’re edgy, yet also polished. 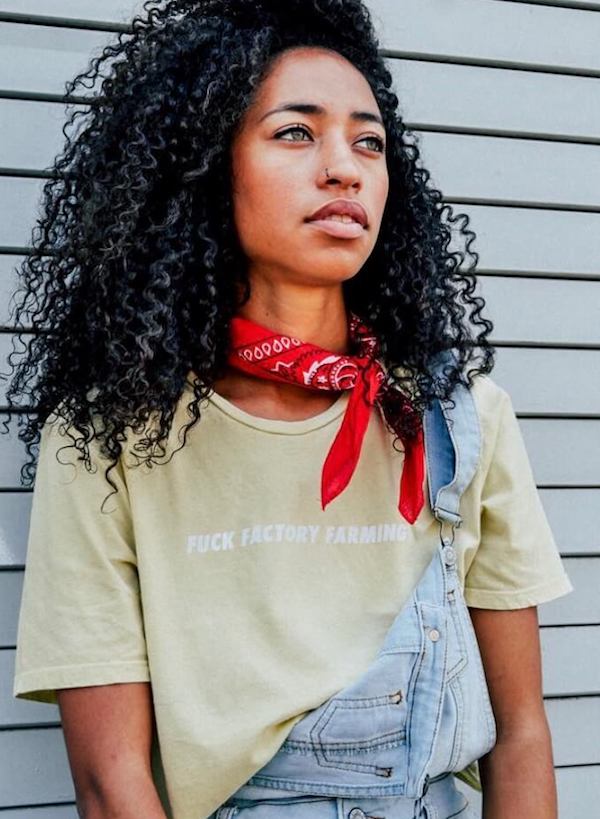 Most tees come in black, and only black, though a few white and color options are available. Women can choose from cute crop top cuts with sayings such as “In Plants We Trust” or slouchy tees reading, “It’s Not You, It’s Meat.” Men’s styles come in classic t-shirts and tank-tops, some with a pocket square-sized, “Animal Lover” inscription. Unisex tees are also available. Wasserman has designed a wider variety of sayings and styles, but her latest collection demands the most attention.

This new design says what’s on every vegan’s mind: “Fuck Factory Farming.” Wasserman explained that she was inspired to print the phrase after attending several Los Angeles pig vigils, organized by the Save Movement. These vigils are held all over the world, where people gather at the gates of a slaughterhouse to meet the incoming trucks transporting the pigs to their final destination. Attendees film the event to spread awareness of the atrocities of this practice, as well as to give the pigs a final comforting touch and some water.

“I thought it was time to take it up a notch and see if I know my customer as well as I think I do,” Wasserman commented.

Acknowledging that those words create a strong message on their own, Wasserman decided to make the font fairly small. “I feel like [the small print] gives the design more ‘class’ opposed to a large font on a shirt that would be more ‘in your face,’” she said.

“It kind of reminds me of a Nike shirt or athleisure type of design with the italic bold font. It’s sophisticated yet edgy.” 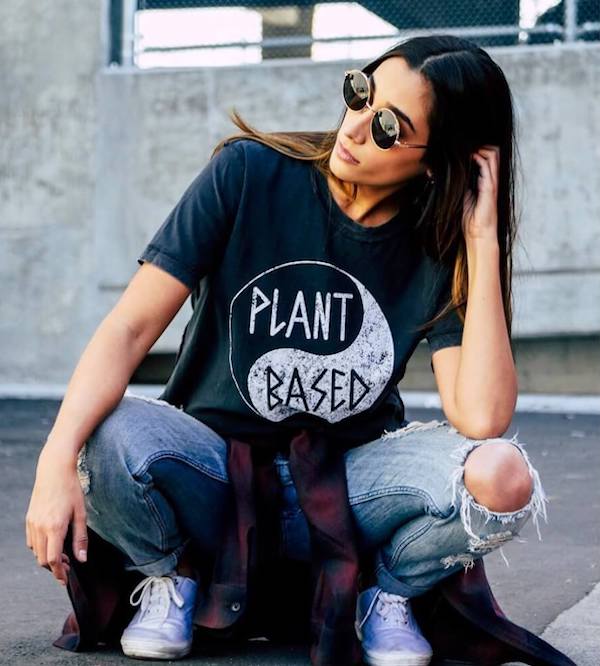 When asked what fashion means to her, she replied, “Fashion means freedom of expression! There’s so much you can do with it and it can be completely creative. As a member of the LGBT community, I don’t find myself fitting into one type of gender so through fashion I’m able to wear ‘guys’ clothes and create an androgynous look that’s comfortable for me. On the same token, I also get a wild hair to dress a bit more femme which I like to play with as well. Being influenced by so many cultures and music genres also plays a role in fashion as well. It’s empowering and can make you feel like part of a community or certain group. Clothing is powerful because it can tell someone who you are or at least give them a perception as well as send a message.”

You may not hear Wasserman cursing factory farming down Sunset Boulevard or see her trolling meat-eater accounts on social media, but she is certainly a devoted advocate to the animal welfare movement. “I’m more of a seed planter if that’s a thing? I like to lead by example and let others figure things out on their own,” she said.

Like fashion, she believes that there are countless ways to express oneself as an activist, and “it really depends on your personality.”

She suggests fusing the worlds of fashion and activism to communicate your message, your way. “Shirt activism is one of the easiest things you can do every day without even thinking about it. When you wear a shirt with a vegan message you are a walking billboard and it helps to break the ice if someone wants to ask you a question about it.” Find your passion, embrace your style, go out into the world, and speak volumes without saying a word.