Belgian brand Mallow Puffs makes two varieties of vegan marshmallows: Vanilla Mallow and Salted Caramel, both of which are enrobed in dairy-free Belgian chocolate. The flavors are now sold at the high street retailer as well as The Vegan Kind, an online supermarket for plant-based groceries.

“Relax! It’s not a super-food. It’s just a yummy super-puffy mallow that happens to be vegan,” reads the description on The Vegan Kind’s website.

Marshmallows are dairy-free but they’re traditionally made with gelatin, an ingredient made by boiling the bones, ligaments, and tendons of cows or pigs. It’s commonly found in marshmallows, gummy sweets, and some desserts.

There are animal-free alternatives to gelatin such as agar agar, which comes from red seaweed and is used in a lot of traditional Japanese sweets like red bean jelly. Carrageenan, another red seaweed-derived ingredient, is used in vegan marshmallows by brands including Mallow Puffs, Freedom Confectionery, and Dandies. 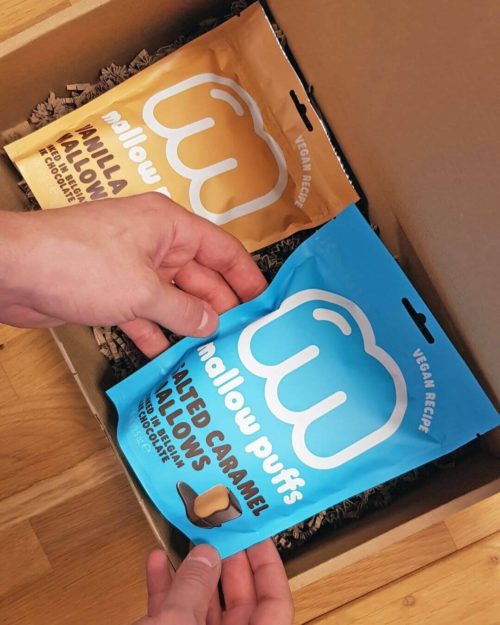 Holland & Barrett announced in June 2018 that it was looking to add 500 new vegan products to its shelves to meet rising demand.

“We know from our suppliers that vegan foods taste better than ever and are available in many more categories than just the chiller,” said Emma Cockerill, Holland & Barrett’s director of product development. “Which is why we are open to working with brands of all sizes, from full distribution to online only, or listings in our bigger H&B More stores.”

The health food chain also plans to open entirely vegan stores. “The amount of people that are engaging in that lifestyle is rising,” chief executive Peter Aldis told The Telegraph in May 2018, adding, “It is our space and we should be in it.”