It looks like Bella Hadid may turn in her runway heels. The model is “freaking the f out” over Nuggs’ vegan chicken nuggets and says she wants to be the company’s newest taste tester.

Hadid recently ordered the brand’s plant-based chicken nuggets. “They have spicy nuggs now so I’m freaking the f out,” she wrote in an Instagram Story. She added: “Guys this isn’t an ad or anything I found nuggs on Instagram a while ago and I’m [expletive] addicted.”

Hadid shared a photo of the soy-based chicken nuggets and tagged the plant-based meat company. She captioned: “Can’t handle. Freaking out. Pls let me be your official taste tester.”

A collaboration between the model and Nuggs might be in the works. The company reposted Hadid’s story, writing that she is “now the official taste tester of Nuggs.”

The New York-based company was founded by Australian entrepreneur Ben Pasternak—who was 19 at the time. Pasternak is also the founder of apps Impossible Rush and Monkey.

The self-proclaimed “Tesla of chicken,” Nuggs launched its vegan chicken nuggets in June 2018. Since then, Nuggs—which operates like a software company, according to its website—has released several versions of the plant-based meat. 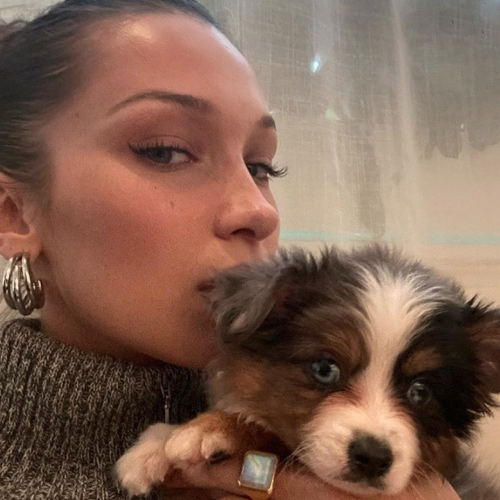 The model urged her followers to donate to a wildlife rescue following Australia’s bushfires. | Bella Hadid

Bella Hadid Speaks Up For Animals

Hadid has previously used her platform to advocate on behalf of animals.

Following the Australian bushfires, the model urged her Instagram followers to take part in a fundraiser to raise money for a wildlife rescue.

“One billion living creatures dead or injured,” she captioned on Instagram alongside a photo of a koala being rescued from the blaze. “Their habitats are being demolished and at this rate, koalas will go extinct,” she added.

Hadid continued: “I am so sorry Australia. I am sending so much love to you and I am praying this will be over soon.”