Two belugas will soon be swimming freely in the ocean for the first time in nearly ten years.

After their rescue from a Chinese aquarium, the whales now live in an open water sanctuary.

The 12-year-old belugas—named Little Grey and Little White—were originally taken from a Russian research center in 2011. They were moved to Chengfent Ocean World in Shanghai, where they performed tricks for entertainment.

Sea Life Trust, a UK-based non-profit working to protect marine mammals in captivity, rescued the whales. The charity transported the animals 6,000 miles to their new home at the Beluga Whale Sanctuary, in Klettsvik Bay off the south coast of Iceland.

After being in captivity, the whales must acclimate to their new, more natural environment. Iceland’s Arctic water is also colder than what the belugas experienced in China. As a result, the whales must increase their calorie intake in order to gain more weight.

In a statement, the head of Sea Life Trust, Andy Bool, said the whales are safely residing in sea sanctuary pools. “[They] are just one step away from being released into their wider open-water home,” Bool said.

“[T]he first stage of their release back to the ocean was as smooth as we had hoped and planned for,” Bool continued. “We are carefully monitoring Little Grey and Little White with our expert care team and veterinarians. [We] hope to announce their final release very soon.” 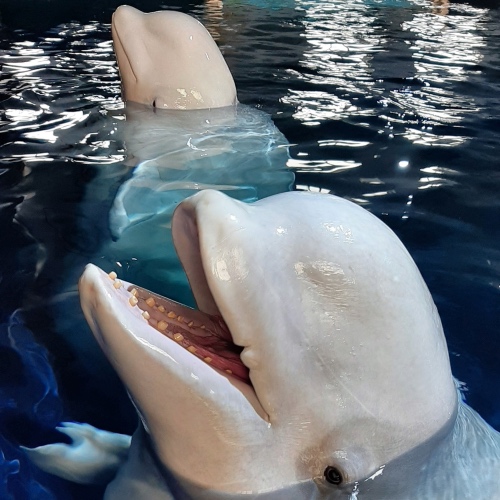 The Whale and Dolphin Conservation (WDC) helped found the facility. It is the world’s first open water sanctuary for belugas.

The sanctuary features a large bay area, which is nearly 350,000 square feet. It gives rescued belugas the opportunity to swim and dive in a more natural environment.

Whales, dolphins, and porpoises are highly complex and social creatures. They roam vast distances in the wild. However, in captivity, they must live in small, barren enclosures, unlike their natural environments. As a result, animal advocates have harshly criticized aquariums like SeaWorld for keeping cetaceans captive.

Danny Groves is the communications manager for the WDC. Groves told LIVEKINDLY that captivity affects whales and dolphins in a number of different ways.

“We can only imagine what it must be like to be trapped in a small tank,” Groves said. “In the wild, they are used to traveling around 100 miles a day.”

In addition to belugas, the Beluga Whale Sanctuary supports the local puffling patrol, which rescues thousands of baby puffins each year.