The wait is over — Ben & Jerry’s dairy-free cookie dough ice cream has finally arrived in the UK.

The famous Vermont-based brand first introduced its vegan cookie dough ice cream to the U.S. crowd last February. Cookie dough is a classic Ben & Jerry’s flavor dating back to 1989, and the vegan version has been given an update for the U.K. launch.

“Here are two reasons to love our latest Non-Dairy. Firstly, it’s caramelly, & very cookie-ey. Secondly, it’s dairyless,” Ben & Jerry’s writes on its website. “Thirdly, you might need to sit down for this… it’s loaded with cookie dough chunks, now… VEGAN! Ok, three reasons. We’re not great with numbers but we are with chunks.”

While the original and U.S. versions feature a vanilla ice cream base, the U.K. pint is made from caramel almond milk ice cream. It even has a new name — Cookie on Cookie Dough. Of course, it still comes swirled with cookie dough and fair trade chocolate chunks.

“Our classic Cookie Dough tub was concocted for people who know the joy (and the temptation!) of sneaking a bite or two of cookie dough before it makes it into the oven, which got us thinking… Why should our vegan fans have to miss out?,” Priscille Moussy, Ben & Jerry’s flavor guru, said in a statement. 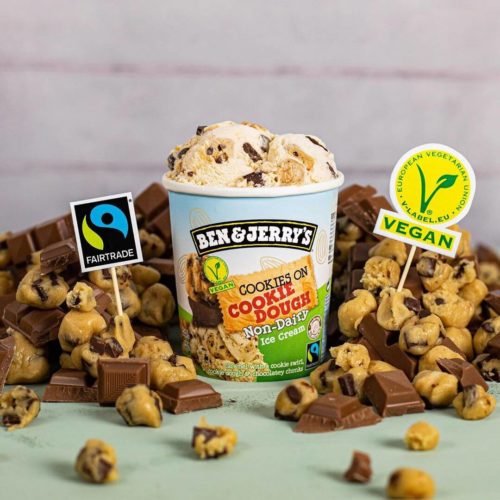 Ben & Jerry’s launched a new vegan flavor in the UK.

Vegan Ben & Jerry’s in the UK

Ben & Jerry’s first launched vegan ice cream in the U.K. in October 2017 in three flavors: Chunky Monkey, Chocolate Fudge Brownie, and Peanut Butter & Cookies. It followed the success of its dairy-free range in the U.S., which launched in 2016.

The U.K. even got its own exclusive flavor last December: Coconutterly Caramel’d, with coconut-flavored vegan ice cream with caramel and cookie swirls and chocolate chunks.

Interest in vegan ice cream is booming. Research from Global Market Insights shows that the market could reach $1 billion by 2024 as more consumers shift toward “innovative products and flavors.” Traditional dairy ice cream brands like Ben & Jerry’s have taken notice — Magnum, Breyers, and Cornetto have all introduced vegan options in recent years.