(Updated December 2, 2020) | Every year around the holiday season, eggnog makes its return to the dairy aisle. While the traditional version is made with milk and eggs, these days, vegan eggnog is widely available in major grocery stores.

Traditionally served during the holiday season in the United States, eggnog is a sweet, thick, dairy-based drink. The frothy concoction of milk, cream, sugar, whipped egg whites, and egg yolks is typically spiced with nutmeg and cinnamon. Rum, brandy, whiskey, or bourbon are typically added to eggnog.

There are also similar drinks outside of the U.S. In Mexico, there’s rompope, which is made from milk, sugar, vanilla, and eggs. Puerto Rico has coquito, a festive coconut-based drink. 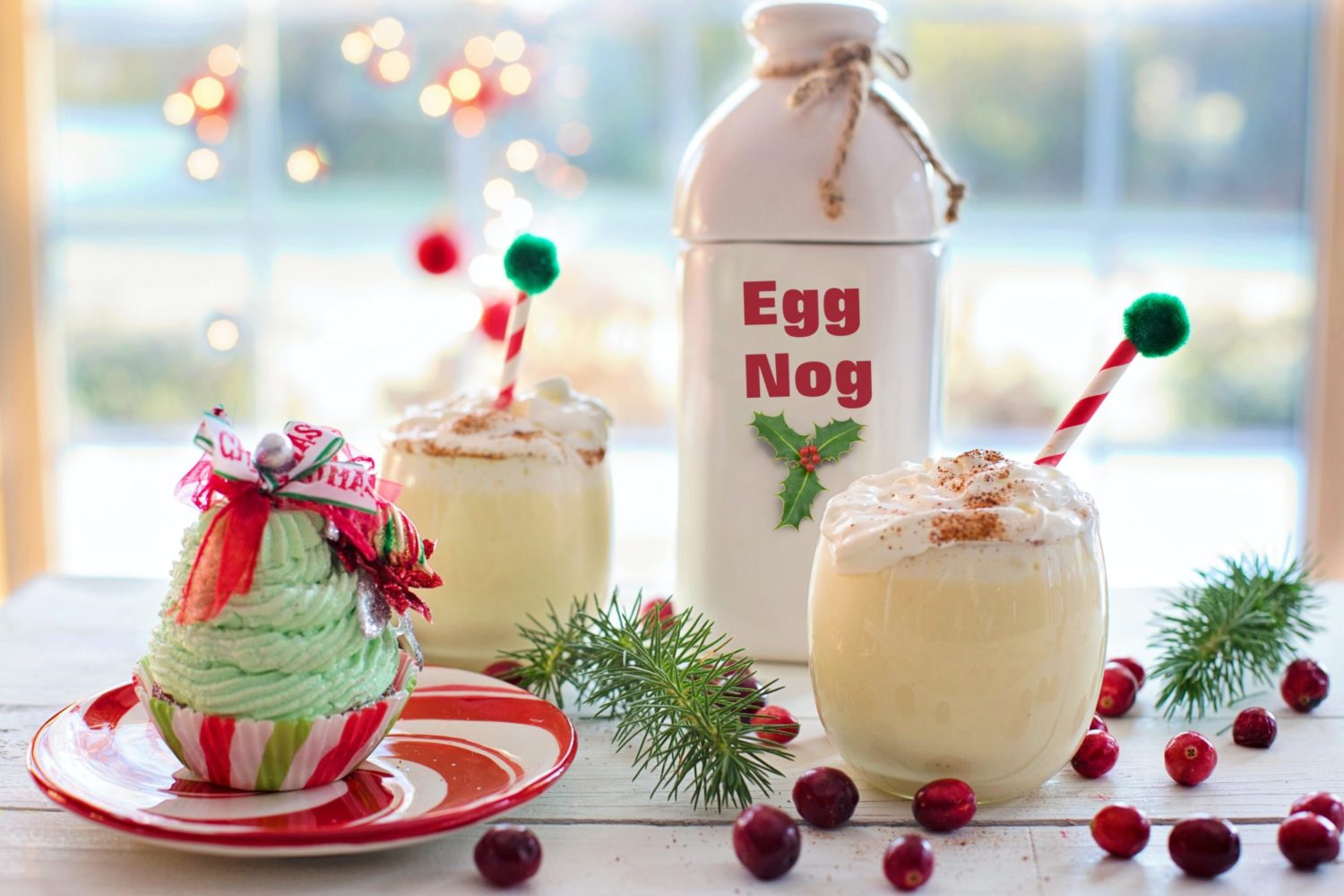 Where does egg nog come from? | Jill Wellington / Pexels.

A Brief History of Eggnog

Eggnog’s history is vague. According to Forbes, Frederick Douglass Opie, a food history professor at Babson College, wrote in his now-defunct blog Food As a Lens that eggnog was once a wintertime drink reserved for the British aristocracy. People drank it hot and continued to do so up until the early 20th century—though, it’s not unheard of for people to serve eggnog warm these days.

American colonists began drinking eggnog in the 18th century, adding rum, rather than brandy, which was heavily taxed at the time. Because rum was traded in the Caribbean, it was more accessible to colonists.

Boozy eggnog caused the Eggnog Riot of 1826 at the U.S. Military Academy in West Point, New York. Colonel Sylvanus Thayer, the superintendent, had banned alcohol from the premises the previous year. Cadets smuggled four gallons of whiskey on campus to make eggnog for the annual Christmas party. On December 24 and December 25, at least 90 cadets wreaked havoc, assaulting two officers, smashing North Barracks windows, tearing down banisters, and smashing plates, cups, and dishes. According to Smithsonian Magazine’s detailed report of the incident, 19 students were court marshaled and 11 were expelled. Eggnog remained a firm favorite during the holiday season, winning over people from all walks of life.

Alcoholic eggnog became forbidden fruit during the Prohibition Era and by the 1960s, cold, bottled eggnog manufactured by dairy companies was a welcome presence in grocery stores. Major dairy producer Dean Foods—which filed for Chapter 11 bankruptcy in 2019—makes about one-third of the 130 million pounds of eggnog that Americans buy each year, according to Slate.

What Is Vegan Eggnog?

With the rise of the dairy-free milk industry, you can now find vegan eggnog in the dairy aisle around the holiday season. Vegan eggnog is eggnog made without dairy, eggs, or any animal ingredients.

Ingredients for dairy-free eggnog vary from brand to brand. Some use almonds, others use soy, coconut, rice, or flaxseeds. Considering the rising popularity of oat milk—which generated $40 million in U.S. sales in the 52 weeks ending on August 24, 2019, up $6 million from 2018, according to Nielsen—it wouldn’t be a surprise to find oat-based eggnog in the dairy aisle next holiday season. 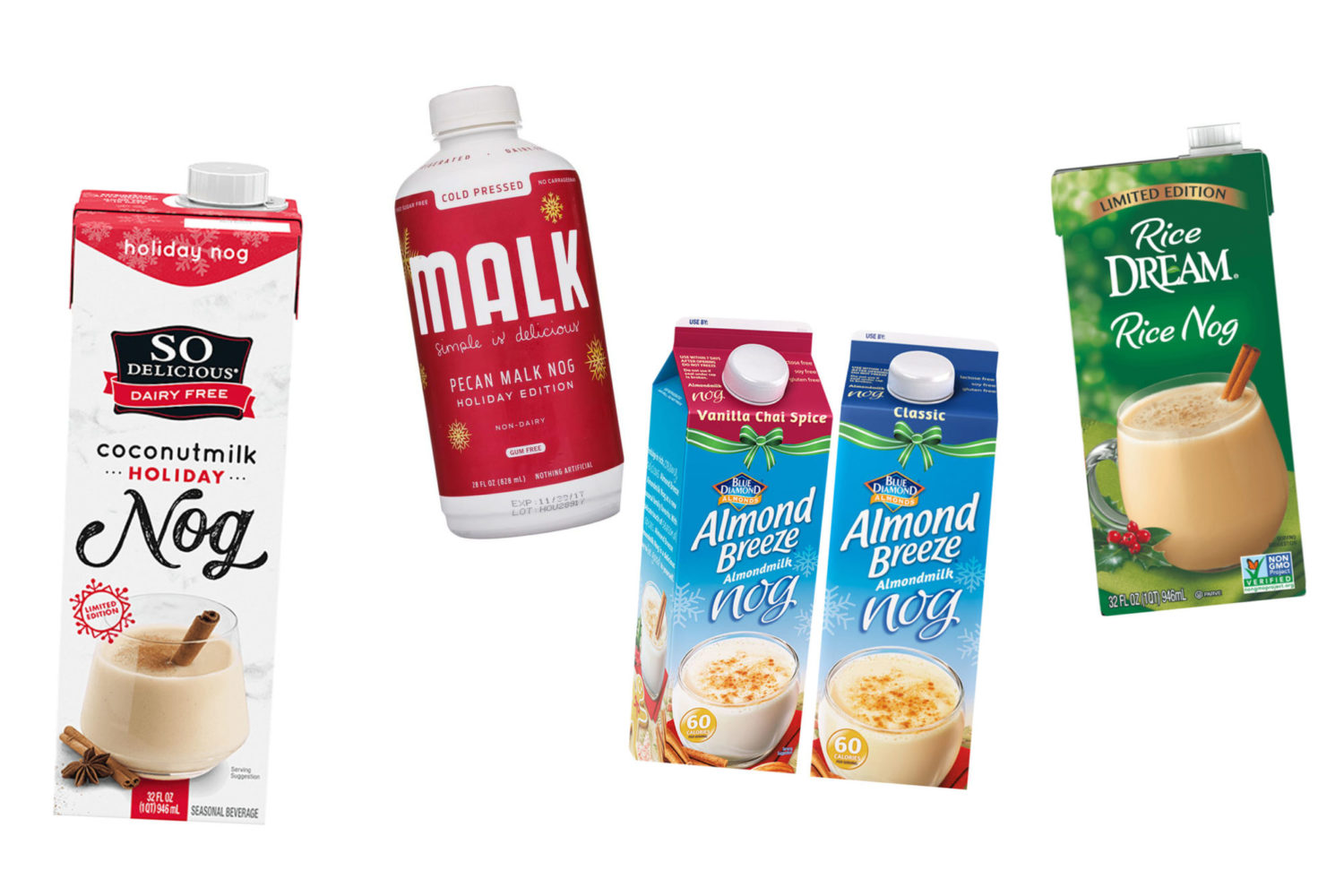 Veganize your festive drinks with these plant-based egg nog brands.

Don’t miss out on the festivities. Enjoy these vegan eggnog brands straight or with a splash of bourbon, rum, whiskey, or brandy.

No eggs or dairy here—this seasonal drink is a firm favorite. So Delicious makes its Holiday Nog with coconut milk and a hint of nutmeg. Drink it on its own or add a splash to your morning coffee. Get it here.

Spiced with nutmeg and cinnamon, Silk Nog has a smooth, velvety flavor that evokes traditional eggnog. It’s made from soy milk and free from dairy, eggs, and saturated fat. Get it here.

Sip and savor the flavors of the season. Califia Farms makes its Holiday Nog from almonds, plus real ginger, nutmeg, and cloves. One serving also gives you 25 percent of your RDA of calcium. Get it here.

Keep an eye out for Trader Joe’s Almond Nog. This festive dairy-free drink is made from California almonds, nutmeg, and ginger. Not only is it vegan, but also kosher certified.

Looking for an allergen-friendly option? Good Karma makes its Holiday Nog from flaxmilk, so it’s free from dairy, soy, and nuts. It’s spiced with a blend of cinnamon, clove, nutmeg, cardamom, and star anise. The brand also carried a dairy-free pumpkin spice nog that’s perfect for the holidays.

Rice Dream’s creamy Rice Nog is the allergen-friendly answer to those looking for vegan eggnog that’s free from dairy, soy, nuts, and coconut. This dairy-free holiday drink is light and not too rich or sweet and perfect when served topped with cinnamon.

Almond Breeze will offer its classic dairy-free eggnog this year. One serving of the sweet, creamy beverage contains just 70 calories. Get it here.

Texas-based organic nondairy milk company Malk is bringing back its Pecan Milk Nog this year. The creamy, festive holiday drink is made from cold-pressed pecans and is free from gums, emulsifiers, refined sugars with notes of cinnamon, vanilla, and nutmeg. Get it here.

Head on over to ALDI to snag a bottle (or two!) of Friendly Farms’ dairy-free almond nog. This seasonal beverage is all delicious—no egg. 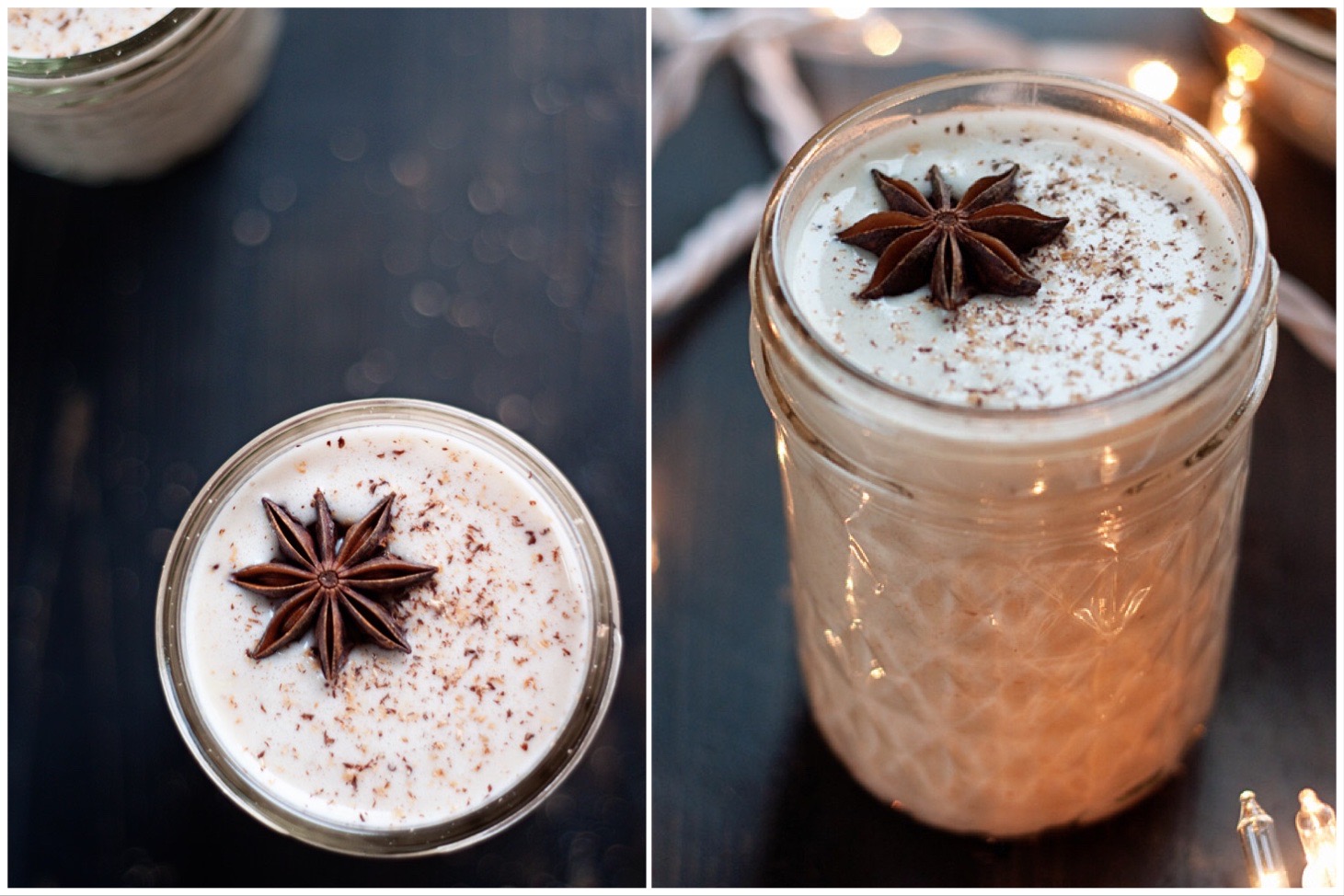 There are plenty of recipes for dairy-free egg nog, including this chai-spiced version. | Kitchen Treaty.

How to Make Vegan Eggnog

Is DIY more your style? Fear not—these vegan eggnog recipes will show you how. From using coconut cream to cashews and hemp hearts, there’s more than one way to crack a vegan egg…nog. Here are the best dairy-free eggnog recipes.

This indulgent vegan eggnog tastes like dessert. It starts with a rich cashew cream base that’s then blended with full-fat coconut milk, nutmeg, maple syrup, and a banana, which helps give it a thick, frothy texture. Whiskey and rum, and a generous helping of dairy-free whipped cream are optional. Get the recipe here.

No nuts here—this vegan eggnog is made from steamed, mashed white sweet potato, which adds natural sweetness and an authentic texture. Hemp hearts are optional, but yield a thicker texture, and it’s spiced with nutmeg, cinnamon, and ginger. Get the recipe here.

This vegan eggnog replicates the eggy flavor and thick texture of the traditional drink using chickpea flour. You start by making a dairy-free “custard” on the stovetop with cloves, vanilla, and a hint of maple syrup. Then, blend it up with cashews (or macadamia nuts), even more spices, and a splash of rum. Get the recipe here.

Eggnog and chai spices make for a winning combination. This egg and dairy-free drink is made from coconut milk blended with cinnamon, ginger, nutmeg, peppercorns, star anise, cardamom, and turmeric. It’s sweetened with dates instead of sugar. Get the recipe here.