In need of some comfort food? There’s nothing like vegan fish and chips.

Fish and chips are a British staple, but as consumers turn towards healthy, ethical, and environmentally-friendly alternatives to animal products, demand for plant-based seafood is on the rise. According to a customer survey by Sainsbury’s, up to 91 percent of British consumers are flexitarian. This means that the majority of Brits are trying to eat more plant-based foods.

Clean-meat companies such as the Californian start-up BlueNalu aim to overhaul seafood production with “cellular aquaculture.” BlueNalu is working to produce slaughter-free seafood, alongside similar companies such as Finless Foods. In contrast, companies such as Quorn, VBites, New Wave Foods, Ocean Hugger, and Good Catch Foods produce plant-based seafood alternatives from existing products such as soya, mycoprotein, and algae.

With so many vegan seafood options to choose from, we picked the best restaurants in the UK for vegan fish and chips.

The Best Restaurants for Vegan Fish and Chips

“Our signature recipe is made from banana blossom that’s been marinated in seaweed and samphire,” says the London based Sutton and Sons. “The innovative menu available at all three of our branches includes ‘prawn’ cocktail, ‘scampi’, ‘chicken’ and ‘fish’ burgers, battered sausages and vegan pie and mash.”

Earth and Stars in Brighton serves smoked tofu in place of fish. The meal is gluten-free and served with vegan tartar sauce, pea purée, and fresh samphire. The restaurant has also served a vegan doner kebab with shiitake mushroom bacon.

Teeside’s local favorite The Seabreeze has added battered banana-blossom fish to the menu. The chippy switched to cooking in vegetable oil and have a separate fryer for gluten-free options. The Seabreeze also sells chia seed and rice nuggets. 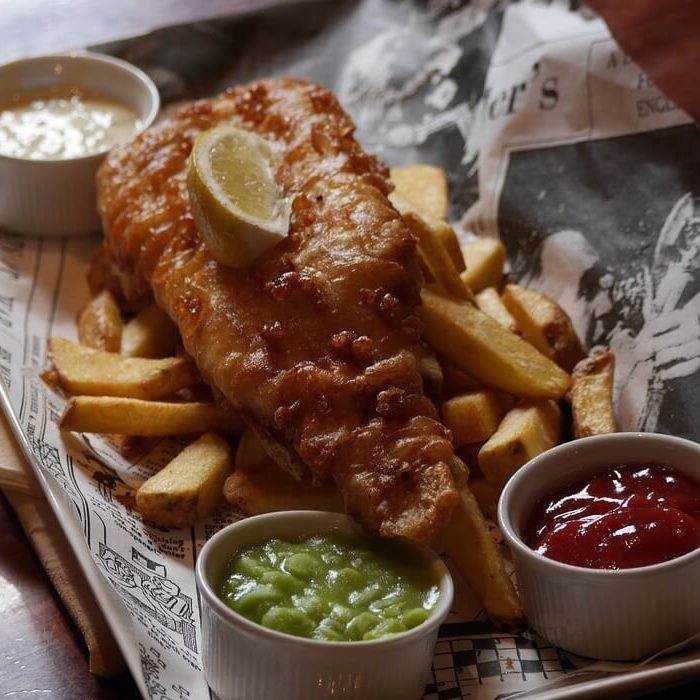 The UK pub chain Hungry Horse launched a variety of new vegan options in 2018, including vegan fish and chips. The plant-based fish uses fish-free flakes from VBites and is served with mushy peas and crispy chips. The pub also serves a hot Bakewell tart and vegan ice cream.

If you feel like staying home and making your own, try this vegan fish and chips recipe made with banana blossoms.