Vegan meat has never been more popular, and vegan chicken, in particular, is having a moment. Even large, international brands like KFC are adding plant-based chicken to the menu; last year, UK locations of the popular fast-food chain got their own Quorn-based “Imposter Burger.” But KFC isn’t the only option you have if you love the taste of vegan fried chicken. These UK-based vegan eateries have got you covered. 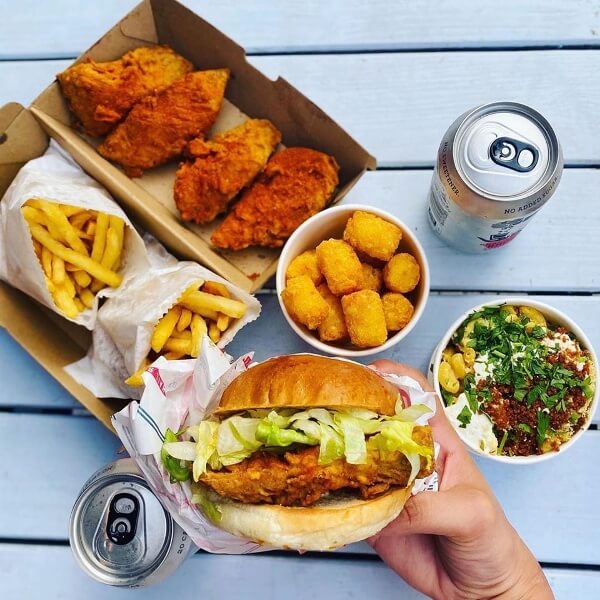 London-based micro-chain Temple of Seitan now has two locations, one in Camden and one in Hackney.

Since opening in 2017, Temple of Seitan has become a vegan London institution, serving plant-based chicken to vegetarians and meat-eaters alike. 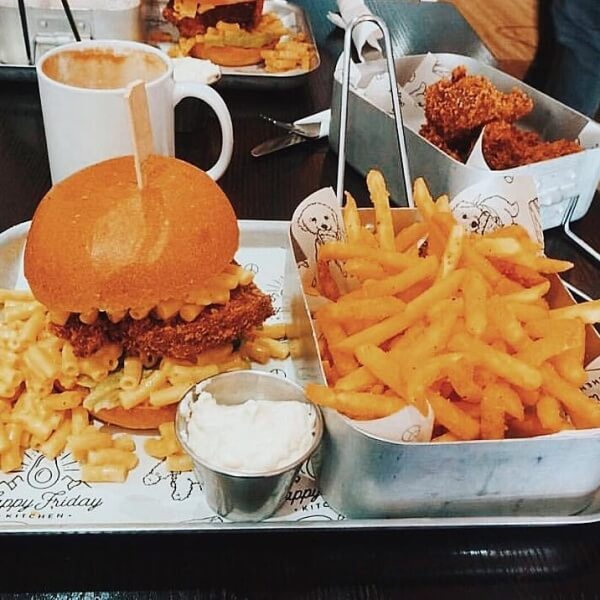 Seitan tenders are available as a side dish, as is the chicken-style buffalo cauliflower. On the mains menu, Happy Friday Kitchen serves a range of seitan-based burgers including a breaded vegan chicken option, served with a variety of pickles and toppings. 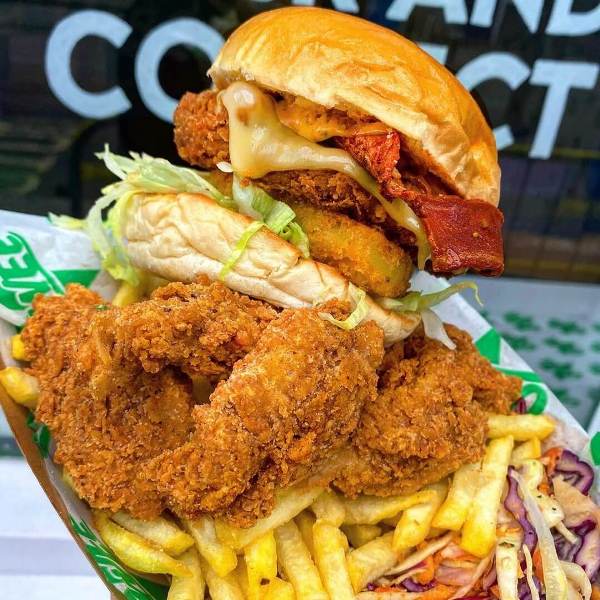 There are now five branches of Oowee in Bristol, London, and Brighton. | Oowee

Bristol’s Oowee Vegan now has three separate locations in the city, in addition to new branches in Brighton and London. The small chain specializes in vegan burgers, dirty fries, and fried chicken.

At Bristol’s Baldwin Street location, customers can order from four distinct vegan fried chicken burgers including the BBQ Cluckin Sandwich and The Baconator. Oowee also tops its fries with fried chicken and offers a traditional-style “Chik’n Piece Box” complete with slaw and chips.

Following the popularity of the 100 percent vegan Baldwin Street restaurant, Oowee converted the original Picton Street location into a plant-based Kebab shop. All of the fast-food chain’s new branches—including Brighton and London’s new shops—will be vegan.

“We decided to make this decision due to the massive demand for vegan food far outweighing the demand for meat within our company,” co-owner Verity Foss told LIVEKINDLY at the time. “When we opened our vegan store we had an overwhelming response and it was the best decision we ever made.” 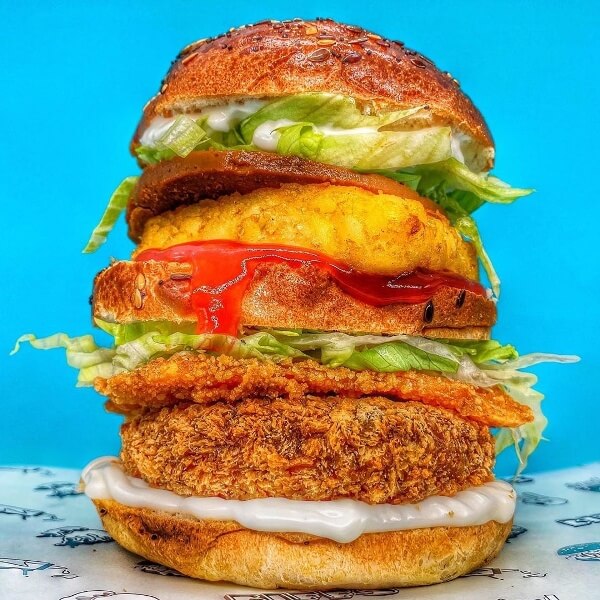 London-based restaurant Biff’s is known for its chicken-style burgers made from jackfruit. According to the brand, its crispy-fried jackfruit is sustainably produced and one of your five-a-day. Biff’s says it tastes “just like the real thing,” and the signature vegan wings even include a sugarcane “bone.”

Other popular menu items include The Father Jack with bacon jam and BBQ sauce, The Bacun Jack and Cheese, and The Jack Bauer Tower of Power—a double-decker sandwich complete with hash browns, deep-fried cheese, and bacun. Biff’s also serves a variety of fried chicken wingz and loaded fries.

Biff’s recently partnered with brewery and pub chain Brewdog to launch the largest vegan food delivery service in the UK. While Brewdog has also worked with Temple to deliver its fried chicken outside of the capital. 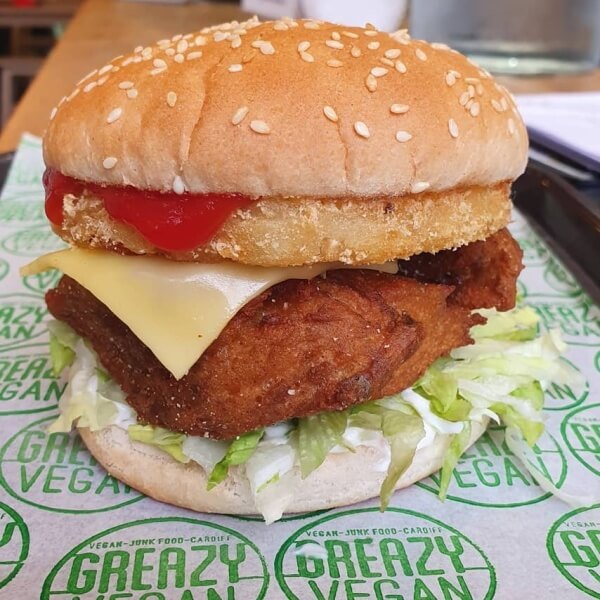 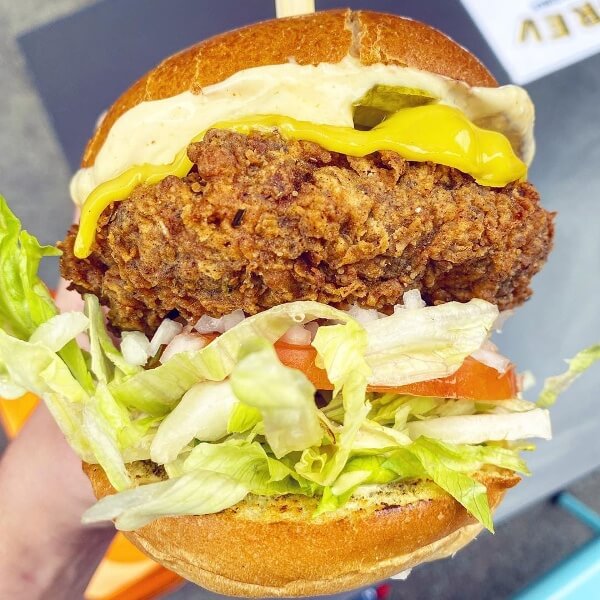 Manchester’s V Rev Diner is home to a variety of vegan comfort food.

The restaurant serves Seitan Fried Chicken as a patty in the Barbecute Without the E burger, Whopper meal, and in the Johnny Nashville. All three include a toasted brioche bun. V Rev also offers a fried chicken patty between two fried doughnuts.

Customers can also get an order of wings in portions of five or 10, served with ranch sauce. V Rev is also well-known for its inclusive atmosphere, promotion of intersectional veganism, and wall of visiting dog photos. 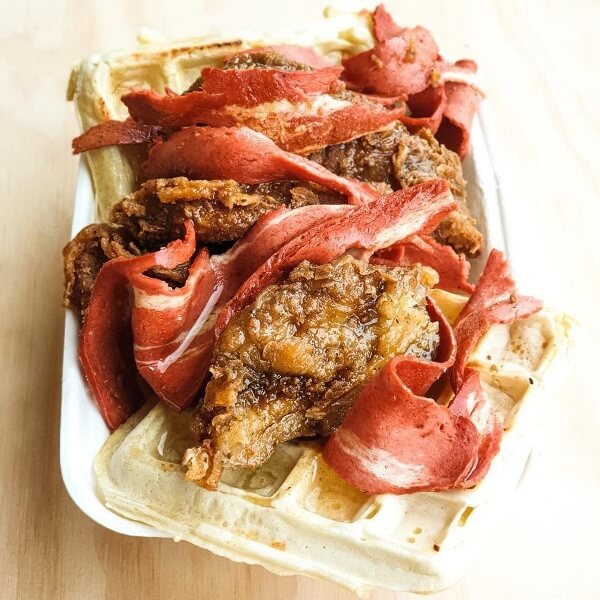 Established in 2018, Huns was voted the number one food business in Leicester in 2019. Earlier this month, the vegan street food brand launched its first-ever restaurant. Prior to opening its first brick-and-mortar, the brand first gained a following at pop-ups, festivals, and other street food events.

Huns offers the popular Classic Hun chicken burger, as well as spicy, BBQ, and Big Mac-style versions. The Chickhun Big Mac was chosen by fans on the company’s Facebook page to be the first special at the new restaurant. Wings and vegan fried chicken-loaded fries are also available, and Huns is currently open for takeaway and collection only. 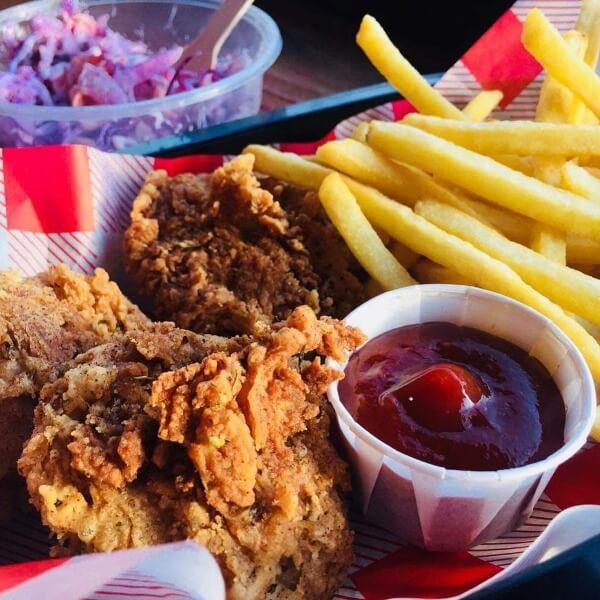 Junk It Up customers can even order a vegan fried chicken pizza. | Junk It Up

Newcastle’s Junk It Up serves a variety of “Southern Fried Fricken” boxes, from three-piece sets up to 10 piece buckets. The restaurant also serves a vegan fried chicken kebab, a variety of burgers, and even chicken-loaded pizzas. Customers can order cocktails and other carefully curated alcoholic drinks from the popular vegan fast-food bar.

Check Junk It Up out here. 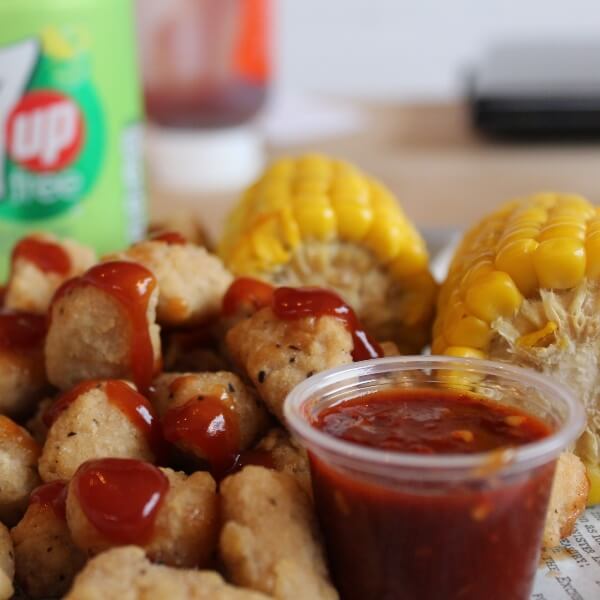 Customers at Sunshine Deli can order the brand’s famous fried chicken in a variety of different forms. The menu includes mini fillets, popcorn chicken, southern fried and spicy burgers, and even a “party bucket” selection of all their chicken options. Beef-style burgers, fish and chips, and gyros are also available. 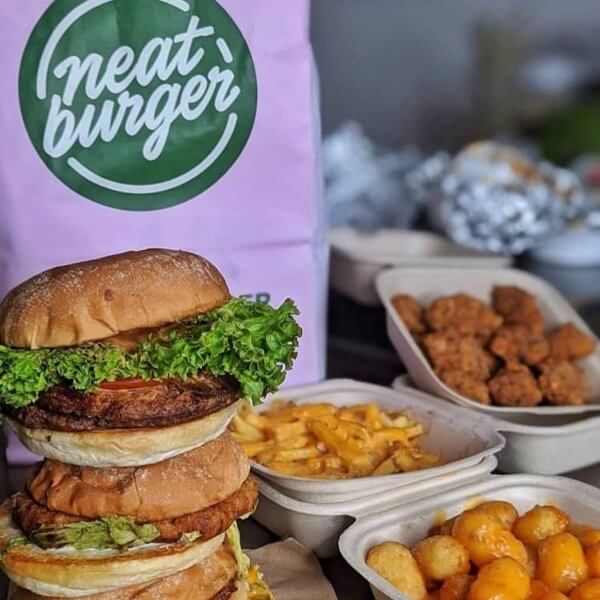 Founded by six-time Formula One World Champion Lewis Hamilton, this popular plant-based restaurant chain expanded to eight new locations in just one day back in March. Neat Burger aims to be sustainable, ethical, and delicious. It offers southern-style nuggets, an original Chick’n Burger, and a Korean Chick’n Burger, along with hot dogs and a variety of vegan beef patties. 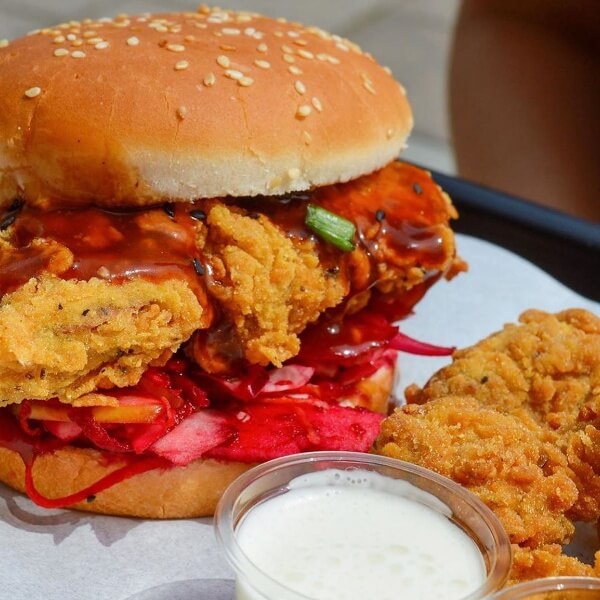 One of the most recent vegan restaurants to open in Brighton is this all-vegan chicken shop. | Really Happy Chicken