Created by Californian based company Beyond Meat, the plant-based phenomenon, the Beyond Burger, not only cooks and tastes like the real deal but you can also find more protein and iron inside than in an ordinary meaty beef burger.

There are currently over 3000 Beyond Burger retailers in the US, with Raley’s, Mariano’s and Bristol Farms amongst others recently signing up to have the gluten, soy and GMO-free triumph in their stores.

Joining in the hype, the Beyond Burger has now been embraced by over 2000 food outlets, following its selection as part of the Sysco’s Cutting-Edge Solution Programme. 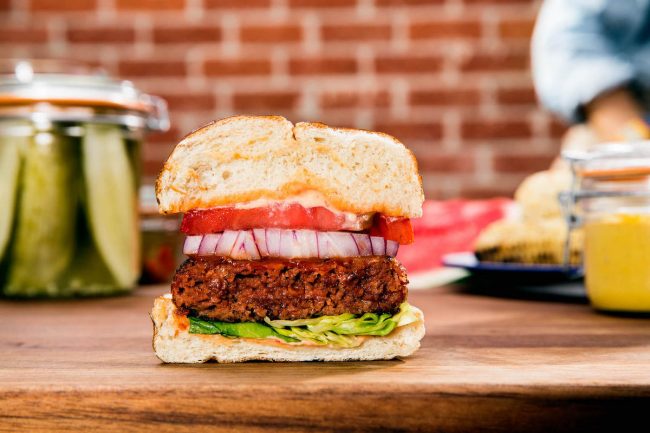 From sport training camps to hotels to college campuses and restaurants it seems that more and more businesses want to cash in on the meat-free sensation and for good reason.

Those who have already given the Beyond Burger a place in their kitchen have seen a huge amount of growth. The founder and CEO of Chicago’s Epic Burger, David Friedman, believes the burger has been a largely positive and financially beneficial addition to their menu. He stated, “In the first three months, we’ve sold more than 20,000 Beyond Burgers which equates to about 10% of burger/sandwich sales and is exceeding our sales expectations. Those numbers continue to grow each week.”

The Beyond Burger can be found nationally in food outlets such as BurgerFi and Twin Peaks Restaurant, eventually alongside iPic Theaters who are expecting to extend the burger as an option in all their 16 locations in 2018.