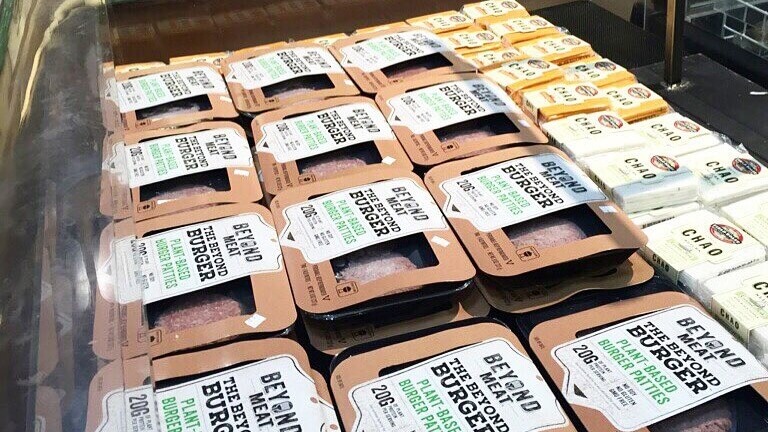 In 2016, vegan meat company Beyond Meat made an unprecedented decision that would ignite change in the way that consumers and plant-based protein brands see meatless meat. It was the year that the Beyond Burger, the vegan burger that looks, cooks, tastes, and “bleeds” like an authentic beef patty, made its retail debut.

Unlike the California-based brand’s selection of plant-based meat, which can be found alongside products from other brands in a designated “vegan” section, the Beyond Burger was the first-ever vegan burger to be displayed alongside packaged meat in grocery stores.

The decision sparked criticism from some vegans, who expressed disgust at having to venture into the meat aisle in order to find Beyond Meat’s innovative new product. But in an interview with non-profit organization Animal Charity Evaluators, Beyond Meat CEO and founder Ethan Brown said that “meat reducers,” are Beyond Meat’s target market, rather than vegans. The brand’s own research shows that 70 percent of the Beyond Burger’s buyers are meat-eaters. According to recent research by The NPD Group, 86 percent of consumers who purchase vegan products are omnivores.

Despite dissenters of Beyond Meat’s merchandising strategy, experts agree that if a vegan company aims to reach mainstream consumers, it must not only appeal to omnivorous taste buds but also stage its products where meat-eaters shop. The strategy proved to be successful. Last March, the company announced that since launching in Whole Foods Market in May 2016, it had sold more than 11 million of its vegan Beyond Burgers. In one major supermarket, Beyond Meat’s realistic vegan burger had actually outsold beef over a five-week period.

Phil Lempert, a grocery-retailing expert known as the “Supermarket Guru” told QZ why selling vegan meat alongside traditional counterparts is successful: “What Beyond Meat is doing is bigger than meat alternatives. They are opening the door for inviting consumers to think about food in an entirely different way.”

Beyond Meat’s success with staging the Beyond Burger in the chilled meat aisle has indeed sparked a change in the way companies and grocery stores perceive plant-based protein. Don Lee Farms Organic Plant-Based Burger, which also “bleeds” with the help of beets, is staged in the frozen aisle of Costco stores across the nation, right next to meat products. Sixty days after its launch, the company announced that it had already sold one million burgers.

In the UK, Dutch food manufacturer Naturli’ Foods recently launched its “bleeding” mushroom burger and plant-based mince producs in supermarket giant Sainsbury’s, and it is staged next to meat. A recent post from Instagram user vegan_guy37 highlights packaged vegan meat found in the meat section of Swedish grocery chain City Gross, suggesting that other grocery stores may be quietly adding vegan products to the meat aisle in an effort to capitalize on Beyond Meat’s groundbreaking strategy.

Now, with Beyond Meat’s global expansion plans underway — it just announced its debut in Tesco, the UK’s largest supermarket chain — it’s yet to be seen if it can have the same success in swaying an international audience of meat-eaters toward its popular vegan items.