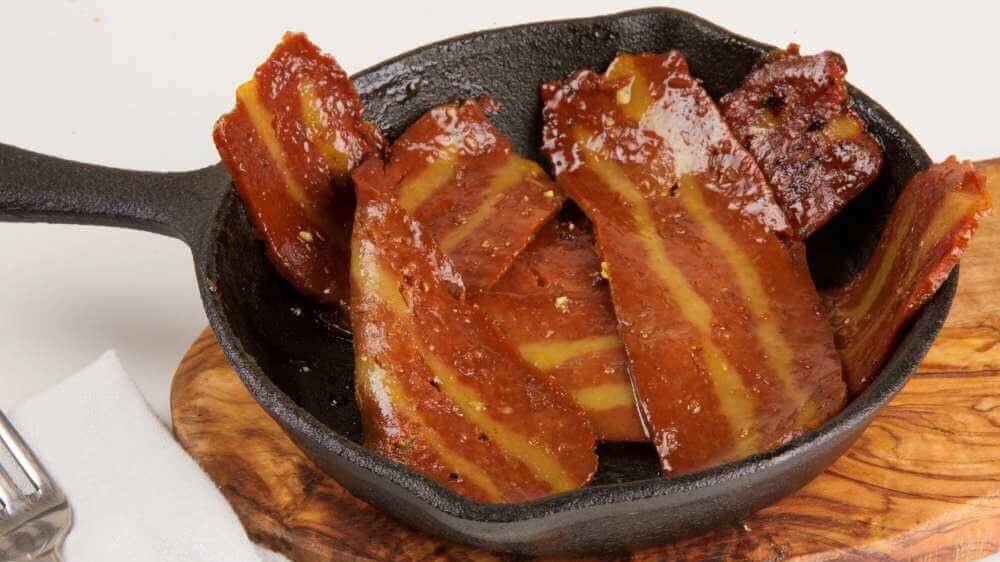 The brand became a favorite around the globe when it launched its iconic Beyond Burger, a vegan patty made from pea protein that looks, cooks, and tastes like beef – it even “bleeds,” thanks to the addition of beet juice.

Meat-free bacon and steak are more difficult to produce than vegan ground meat products due to the foods’ structure, according to Ecovative, IKEA’s packaging supplier that used its mushroom technology to make vegan bacon. “When you talk to the folks who do plant-based burgers, the goal is to do a bacon cheeseburger,” the company said.

Beyond Meat has attracted a number of high-profile investors including Bill Gates and Leonardo DiCaprio as well as players in the meat industry; Don Thompson, the former CEO of McDonald’s, and Tyson Foods, America’s largest meat processor.

Burger-lovers can now find the Beyond Burger in thousands of supermarkets across the United States including Whole Foods, Safeway, and Kroger, as well as restaurants like TGI Fridays and Carl’s Jr. Hotels and sports stadiums have gotten on board, too. Across the pond, the patty is a success in the UK where it is sold in leading supermarket Tesco and restaurant chain Honest Burgers, known for its meat-heavy burgers.

Since it launched the burger in 2016, Beyond Meat has sold 25 million burgers worldwide, according to CNBC. Ninety-three percent of people buying Beyond Meat products at supermarkets are meat eaters. “So they’re buying not only plant based meat, but they’re buying animal meat and that’s a really important breakthrough for us,” Brown said to CNBC.

Beyond Meat has not announced when it will launch its vegan bacon, but a number of brands already do. UK-based vegan meat brand SGaia, makes its streaky meat-free bacon from wheat and soy protein. Tofurky makes vegan bacon from tempeh and vegetarian brand Sweet Earth makes a hickory-smoked vegan bacon from seitan.