Pioneering vegan meat company Beyond Meat has become so popular that the company continues to face inventory issues. The factory is expanding to meet the high demand.

In a letter addressed to its “Valued Customers,” Beyond Meat CEO Ethan Brown explains the overwhelming success the company has seen in a short time frame. “Over the past few months Beyond Meat has seen increased demand for our flagship Beyond Burger product that has far exceeded even our most optimistic expectations. Due to this increased demand and some unforeseen technical mechanical issues we experienced at our 3rd party co-packer, we will have continued limits on our ability to supply shipments of The Beyond Burger to you.

“To address this issue Beyond Meat has commissioned three additional production facilities and a new Beyond Meat production facility located in Columbia, Missouri – all expected to be operational in June 2018. These new facilities will increase The Beyond Burger output by more than 200% within the next four weeks,” Brown continued who later added the company expects a “100% fill rate on Beyond Meat orders by no later than July 6th [due to the new facilities]… I assure you that providing you with your full complement of Beyond Meat products is our highest priority.” 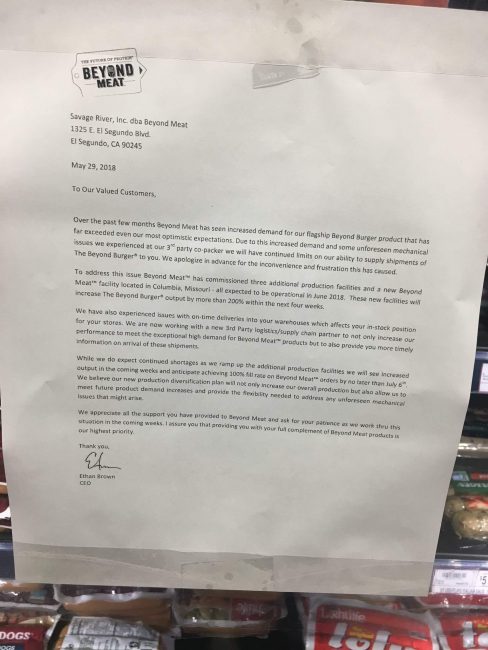 Brown’s letter follows more positive news surrounding the company. In March, it announced it had sold more than 11 million Beyond Burgers since they were launched in 2016, just a month after its chairman said the company’s sales in Hong Kong had quadrupled over the year prior. Last month, the groundbreaking vegan meat business announced it has partnered with distributors across Europe, UAE, Taiwan, South Africa, Canada, and Mexico, and more to bring its products across the globe this summer.

In addition to the wildly successful vegan Beyond Burger – which even outsold beef in a major supermarket’s meat case during a five-week period – Beyond Meat launched a plant-based meaty sausage that Brown claims can solve a variety of food system-related issues. The company also told guests at the National Restaurant Association Show in Chicago last month that it plans to launch vegan breakfast sausages this fall.