Updated June 10, 2019. Last month, California-based Beyond Meat became the first vegan meat brand to IPO. And the market responded enthusiastically: the brand broke $100 per shares before the month was up. Bloomberg reports that its valuation is inching closer to Pilgrim’s Pride, one of the biggest poultry producers in the U.S. Shares are now up 550 percent since Beyond Meat went public.

According to Reuters, the company was expected to offer 9.63 million shares, up from an initial announcement of 8.75 million shares. The IPO was priced at $25 per share, but closed its first day at $65, according to MarketWatch, jumping 240 percent in value. It was the best initial public offering of 2019, according to CNBC, which added that Beyond Meat’s IPO “left every other debut in the dust,” including Uber Technologies’. On its first day of trading, Uber dropped more than 7 percent. Days later, it fell another 10.8 percent.

Beyond Meat’s market value is nearing $6 million. Stock prices are now valued at around $99.9.

The vegan meat brand will be listed on the Nasdaq as “BYND.”

The brand hopes to use proceeds raised from the IPO to invest in current facilities, expansions, and on research and development.

The move to go public was suspected last October after an anonymous source revealed the vegan meat producer was in contact with several banks. CNBC reported that Beyond Meat had reached out to J.P. Morgan, Credit Suisse, and Goldman Sachs to lead an IPO. While many vegan brands have attracted venture capital funding, this would make Beyond Meat the first publicly traded vegan meat company.

According to CNBC, “The nearly $30 billion processed meat industry last year grew by 2 percent, while the $1.4 billion meat alternatives industry grew by 22 percent, according to data service Euromonitor.” Aware of this trend, meat companies have been heavily investing in plant-based alternatives. Besides high-profile individuals like Bill Gates and Leonardo DiCaprio, Beyond’s investors have included Tyson Foods, one of America’s largest meat producers. Tyson initially took a five percent stake in Beyond, but came back to increase its investment soon after. 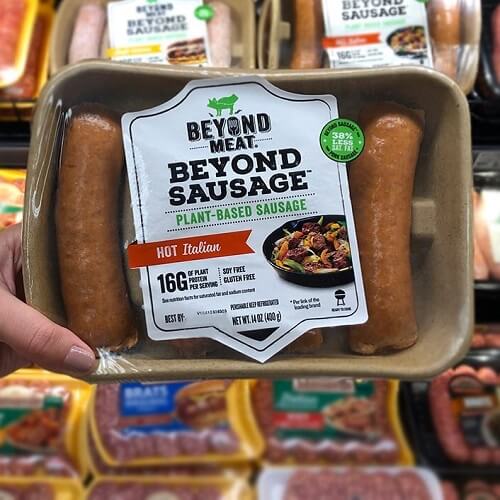 Beyond Meat is most famous for its Beyond Burger, which mimics the taste and texture of a beef burger, and even “bleeds.” The Beyond company website says that “by shifting from animal, to plant-based meat, we can positively and significantly impact 4 growing issues attributed to livestock production and consumption: human health, climate change, natural resource depletion, and animal welfare.”

Beyond Meat has rapidly grown since its launch in 2016, selling over 25 million Beyond Burgers along the way. Last August, the Grand Hyatt in Singapore added the Beyond Burger to its menu and sold 1,000 burgers on the first day.

“We really don’t focus on the plant-based meat sector as much as we focus on the meat sector itself,” Beyond Meat CEO Ethan Brown told CNBC. “That’s a $1.4 trillion industry with just incredible diversity and potential globally.”