(Updated June 10, 2019.) Vegan meat brand Beyond Meat has unveiled its newest product: Beyond Beef, a plant-based protein that has the taste, texture, and versatility of ground beef. The ground beef is now available at Whole Foods Market in Boulder, Colo., with a national rollout to follow.

Beyond Meat’s new plant-based protein is made from a blend of pea, mung bean, and rice proteins that created a chewy, juicy texture like traditional ground beef. It also contains 20 grams of protein per serving – more than beef – and 25 percent less saturated fat at less than 6 grams per serving.

“We’ve long had our eye on creating a product that enables consumers to enjoy all the benefits and versatility of ground beef while tapping into the human health, environmental, and animal welfare benefits of plant-based foods,” Ethan Brown, founder and chief executive officer of Beyond Meat said in a statement. “As is our commitment, we’ve built this latest addition to our family of plant-based meats while being thoughtful about ingredient choices that support everyday use by the whole family, including strict avoidance of GMOs, soy, or gluten.” 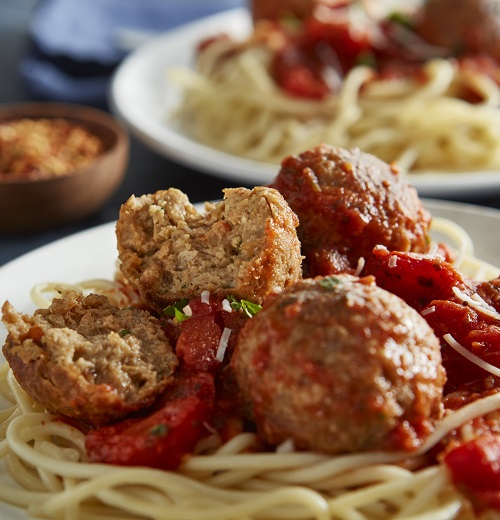 Like the Beyond Burger and Beyond Sausage, Beyond Beef is gluten-free, soy-free, made from non-GMO ingredients, and free from antibiotics and hormones found in factory farmed meat. Beyond Meat also expects the new product to receive Kosher and Halal certification. It can be shaped into vegan burger patties and meatballs or be seasoned for tacos or meaty pasta sauce.

The El Segundo, California-based vegan meat brand says that Beyond Beef’s creation was driven by consumer demand, as 70 percent of individuals are looking to reduce their red and processed meat consumption for reasons related to health, sustainability, or animal welfare.

The Beyond Burger, a realistic vegan burger that cooks and tastes like meat, is highly popular among meat-eating consumers. Ninety-three percent of the burger’s customers are meat-eaters, according to the company’s own data. In some retail locations, the burger is staged next to meat in the chilled section.

“Our goal has never been to be the top-selling veggie burger company, although we obviously want vegans and vegetarians to enjoy our products,” said Seth Goldman, executive chairman at Beyond Meat. “But we’ve never aspired to be the leader of 5 percent of the market, we’re going after the other 95 percent.”

Beyond Meat first launched its vegan Beyond Burgers at the Pearl Street Whole Foods Market in 2016. It was the first store to merchandise the vegan meat in its conventional meat aisles as the brand’s aim is to reach the cross-over flexitarian customer. The goal is the same with the ground beef. Whole Foods will be sampling the beef all week.