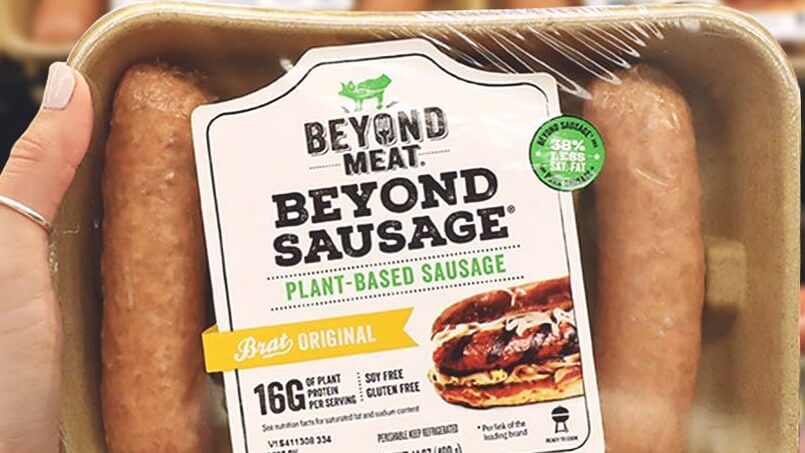 The brand plans to invest in the plant protein supply chain in order to create products that rival its meaty counterparts when it comes to price. Founder and CEO Ethan Brown told Forbes, “We have an ambition to be part of the generation that separates meat from animals.”

He added: “[t]here’s no reason [plant based protein] shouldn’t be cheaper than meat.”

Beyond Meat’s flagship product, the Beyond Burger launched in 2016. Today, it’s available in thousands of grocery stores across the world as well as a growing number of mainstream restaurant chains. A&W Canada, one of the chains that serve the meat-free burger, appears to be on board with Brown’s vision. The fast-food restaurant will offer the Beyond Burger at $3.99 — the lowest price in Canada — until September 29. According to Narcity, the burger is typically priced between $6.99 and $7.59, depending on location.

#BeyondSausage is coming to Europe! So naturally, we surprised a bunch of Bremen, Germany football fans with our sizzling plant-based sausage for the first time. ⚽ Their reactions were priceless, see for yourself! _______________________________ For the rest of our hungry European fans… we will be showcasing Beyond Sausage at Anuga, the world's largest food show, this weekend. Exciting times ahead! #GoBeyond

An Appeal to Meat-Eaters

Along with A&W Canada, Beyond Meat is becoming increasingly available in fast-food restaurants.

Subway began trialing vegetarian Beyond Meatball Subs at select locations this month. KFC tested vegan chicken at one Atlanta location, sparking hour-long lines down the street. According to the brand, more vegan fried chicken was sold in five hours than the amount of popcorn chicken it would sell in an average week. Del Taco added Beyond Meat beef crumbles to the menu in late February. The launch is one of the most successful in the chain’s history.

Selling plant-based protein in meat-heavy fast-food chains plays into Beyond Meat’s greater mission: to get meat-eaters to love vegan food. It does that by placing its products where the majority of consumers shop for food. When the Beyond Burger first launched in Whole Foods Market, it was staged next to meat, where it outsold beef in some locations.

According to the brand’s own data, 93 percent of the Beyond Burger’s customers aren’t vegan. Still, 93 percent isn’t good enough. The company launched a newly formulated Beyond Burger this summer, boasting an even more realistic taste and texture. Brown explained to Forbes improving products is like a science: “It’s about trial and error. “There are thousands of molecules that make meat taste like meat, and we’re getting better at knowing which molecules are driving which flavors.”

A&W Canada will offer the Beyond Burger for $3.99 until September 29.