You can now find the vegan Beyond Sausage on the menu of all popular fast-casual vegan Veggie Grill locations, according to an announcement via Beyond Meat’s Instagram story. 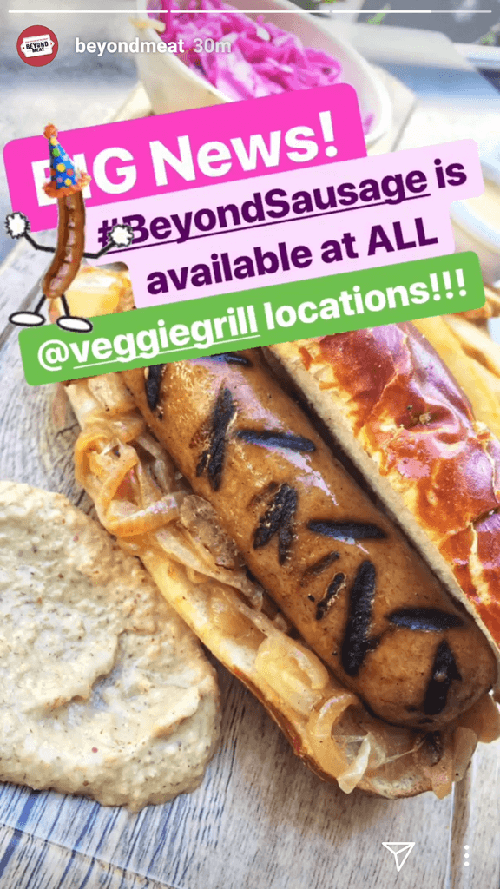 In the same vein as the popular Beyond Burger, the Beyond Sausage looks, “sizzles,” and tastes like a traditional pork sausage, thanks to an innovative blend of pea protein isolate, coconut oil, and other plant-based proteins. Each sausage contains 16 grams of plant-based protein and is both soy-free and gluten-free. It also contains no cholesterol and lower amounts of fat and sodium than animal-based sausage. Not only is it healthier compared to a traditional pork sausage, it is also more environmentally-friendly.

Its casing is made from alginate, a vegan ingredient derived from algae, which provides a realistic “snap” when you bite into it. It is currently available in three flavors: Hot Italian, Sweet Italian, and Brat Original.

Beyond Meat launched the Beyond Sausage late last year at its restaurant inside the Boulder, Colo., Whole Foods Market. Following the launch, the Beyond Sausage debuted all three flavors at Schaller’s Stube sausage bar in New York City’s Upper East Side neighborhood. Wurstküche, a “purveyor of exotic grilled sausages” located in Downtown Los Angeles and Venice, soon joined Schaller’s in offering all three flavors.

“In keeping with our Eat What You Love™ brand promise, I am pleased to bring to market our delicious plant-based sausage line, product innovation that provides consumers with that satiating taste and juiciness of animal sausage with the health and environmental upside of plant-based eating,” Ethan Brown, Founder and CEO of Beyond Meat, said in an interview when the Beyond Sausage first arrived in LA.

According to Beyond Meat, the Beyond Sausage will continue to “pop up” around the country.