The world’s biggest meat company doesn’t even know where all of the beef it sells is coming from. Let that sink in.

Brazilian meat processing giant JBS supplies meat to companies all over the world. It has now come under fire for a lack of transparency and information gaps in its supply chain. Because of this, the company can’t guarantee consumers it doesn’t have links to illegal deforestation.

In 2009, JBS publically committed to fulfilling the “minimum criteria for industrial-scale cattle operations in the Brazilian Amazon biome.” The commitment—also undertaken by meatpackers Mafrig and Minerva—stated that the company would prove “in a manner that can be monitored, verified, and reported” that no ranchers involved in Amazon deforestation would be included on its supplier list.

Now, a decade later, the company is unable to monitor a significant proportion of its suppliers in the Amazon. According to the Guardian, JBS has “refused to answer direct questions about exactly how much of its beef comes from so-called ‘indirect suppliers.'”

Indirect suppliers are farms where cattle are born or fattened, those farms then sell the animals on to other farms or slaughterhouses. Cattle can be sold several times before JBS purchases them.

In contrast, direct suppliers are farms where cows are both born and reared to slaughter age on the same farm. These are much easier to trace.

According to the sustainability-focused global media platform TriplePundit, one of the issues with indirect suppliers is that “along the way, someone, somewhere could have cut corners—as in cutting down forests to create more pasture land.”

Unlike JBS, Mafrig has openly admitted half of its cattle comes from indirect suppliers. Last year, reports surfaced linking the meat company with a farmer using illegally deforested land in the Amazon. When called out, Mafrig said it was misled by a government certification of the farm.

Deforestation in the Amazon

Last summer, reports of fires in the Amazon—home to around 10 percent of the world’s known species—dominated headlines. Scientists linked the fires with cattle ranchers.

Ane Alencar—the scientific director of the Institute of Environmental Research in Amazonia—said at the time, “these are not wildfires, but rather fires set by people seeking to create cattle ranches, intentionally ignited during the dry season each year. They cut the trees, leave the wood to dry and later put fire to it, so that the ashes can fertilize the soil.”

After global attention focused on the burning Amazon, Brazil’s President Jair Bolsonaro— nicknamed the “Trump of the Tropics” by some—banned the use of fire to clear trees for 60 days from August 29. In the past, Bolsonaro has called data showing deforestation is rising in the Amazon “lies.”

Some countries have called for a boycott on Brazilian beef. During the fires, Finland asked the European Union to consider banning it completely. Finland’s finance ministry said in a statement, “finance minister Mika Lintila condemns the destruction of Amazon rainforests and suggests that the EU and Finland should urgently review the possibility of banning Brazilian beef imports.”

Beef supply chains in the European Union, Canada, and the U.S. are more tightly controlled. However, they still impact the environment significantly. There are about 1.5 billion cows and bulls around the world, and they all emit about two billion metric tonnes of carbon dioxide (CO2) equivalents every single year.

According to Time For Change, the clearing of forests and rainforests in the tropics is responsible for an extra 2.8 billion metric tons of CO2 emissions.

Where Do Meat Products Come From?

As well as deforestation, investigations have linked JBS to animal welfare violations, as well as hygiene breaches, and modern-day slave labor. The company, which has revenues of $50 billion, supplies to 150 countries.

So how do you know where the meat on the shelf is from? It’s difficult. Brands are reluctant to give out details about supply chains. In 2014, BuzzFeed asked 13 food companies where their meat came from; only one (Applegate) told them.

Kraft, Heinz, and Campbells stated they wouldn’t give out supplier information for “competitive reasons.”

Others didn’t respond to requests for information at all.

A spokesperson for Campbell told Buzzfeed, “Campbell sources all of its beef products from USDA-approved suppliers in the U.S. and South America and some of its organic beef is sourced from Australia. The chicken used in our products in the U.S. are raised and processed in the U.S. We do not share supplier names due to competitive reasons.”

‘Cheap Meat Comes At A Price’

While much of the uproar around Brazil’s beef industry focuses on deforestation and indirect suppliers, there is a lack of transparency elsewhere in the meat industry too.
According to Compassion in World Farming (CiWF)—the world’s leading farm welfare organization—meat companies aren’t open about animal welfare.

CiWF states that meat labels often say things like “farm assured” or “locally sourced.” However, they don’t actually state where the product has come from. And they don’t guarantee that animals have come from high welfare farms.

CiWF is campaigning for clearer labeling so that consumers can make informed choices about their food purchases. It notes: “cheap meat usually comes at a price – one paid by the farm animals and often the environment too.”

To demonstrate its point, last summer the organization commissioned street art in Birmingham. The art shows a pig caged in an upside-down shopping trolley. CiWF allowed speculation over the art’s origins to take place before it took responsibility; some believed it was by the renowned anonymous street art activist Banksy.

“We commissioned this stunt to show easy it is to make assumptions when things aren’t clearly labeled, whether a piece of art or a pint of milk,” said Natasha Smith, CiWF’s UK campaign manager, in a statement. 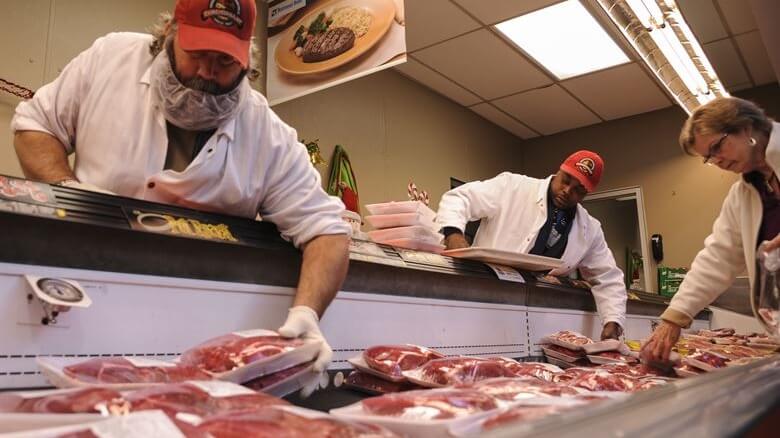 Article Name
The Biggest Meat Company in the World Doesn’t Know Where Your Beef Comes From
Description
The world's biggest meat company JBS has information gaps in its supply chain. It is linked to unethical practices, like deforestation.
Author
Charlotte Pointing
Publisher Name
LIVEKINDLY
Publisher Logo