The announcement follows the greenlight from the FDA on Impossible’s use of soy hemoglobin, aka heme, as a color additive, CNBC reports. Heme is the iron-rich compound that helps give the company’s signature product, the Impossible Burger, its realistic flavor. Impossible isn’t in the clear just yet — anyone “adversely affected” by the Silicon Valley brand’s burger can file an objection to its retail debut.

“We’ve been engaging with the FDA for half a decade to ensure that we are completely compliant with all food-safety regulations — for the Impossible Burger and for future products and sales channels,” Impossible Foods chief legal officer Dana Wagner said in a statement.

Heme’s safety for human consumption was the subject of FDA concern in 2017, but received GRAS (generally recognized as safe) certification last July. Heme is still the subject of an ongoing debate between some vegans after it was revealed that Impossible tested it on animals to comply with food safety standards. According to PETA, more than 180 rats were experimented on and killed.

From Restaurants to Retail 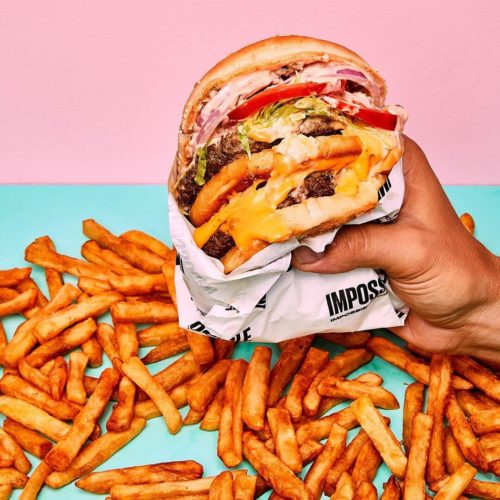 The Impossible Burger is currently available in restaurants only. Since its 2016 launch in chef David Chang’s Momofuku Nishi, the burger broke ground in the fast-food business. It’s now available nationwide at White Castle, QDOBA Mexican Eats, and will be at around 7,000 U.S. Burger King locations by the end of the year.

Impossible has faced some issues with keeping up with demand, but is now making moves to secure more production facilities. Earlier Wednesday, the company announced a partnership with OSI Group, a producer of burger patties for restaurant groups, to ramp up production. Impossible and OSI will invest in multiple facilities in the Chicago area to make vegan burgers, Reuters reports.

The original Impossible Burger was made from wheat and potato protein, Impossible unveiled the Impossible Burger 2.0 at the Consumer Electronics Show (CES) at the beginning of the year. The newly formulated vegan meat is comprised of soy protein — making it gluten-free — and contains as much iron and protein as a beef burger. The new vegan burger meat has a wide range of culinary uses, including make tacos, meatballs, meatloaf. Impossible Foods is also exploring vegan fish, sausage, pork, and chicken.

Impossible has a number of high-profile investors, including Bill Gates, Jay-Z, Serena Williams, and Jaden Smith. The latter three were part of a $300 million round of funding closed last May.

Impossible has not announced which retailers will carry the burger. It’s expected to roll out to supermarkets starting this September.