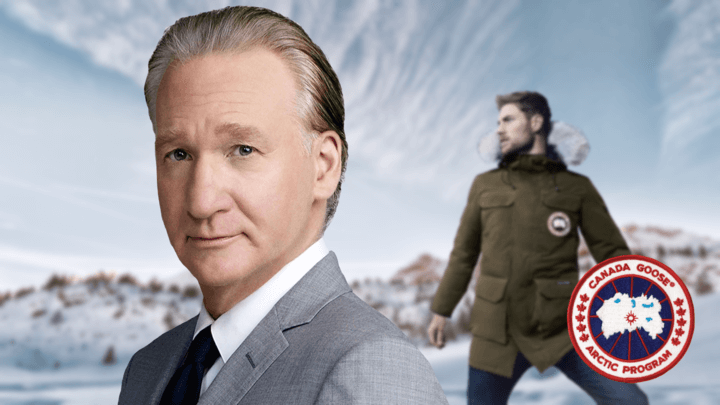 Maher made the comments in a segment of his popular HBO show “Real Time.”

“See, what they don’t realize — or may not care about — is that Canada Goose trims its coats with the fur of coyotes who’ve been crushed and mangled in steel traps so painful and indiscriminate that they’ve been outlawed in over 85 countries,” he explained.

“These clever, protective canines don’t die right away,” he added. “Some, like mothers who are desperate to get back to their pups in the den, try to chew off their own leg.”

Animal rights organization PETA (People for the Ethical Treatment of Animals) supports the comments made by Maher.

The outerwear brand — which has stores across the world — has become the target of several campaigns by the group. Most recently, PETA erected a billboard in Detroit asking residents to avoid jackets made by Canada Goose, and instead opt for vegan alternatives.

Canada Goose doesn’t just use coyote fur in its designs, it also stuffs its jackets with goose feather down. Maher explained, “[The birds are] grabbed by the neck, stepped on, and crammed into crates so crowded they make clown cars look like Cadillacs.”

“Geese are gentle and loyal and mate for life,” he continued. “But there’s no ‘happily ever after’ at the slaughterhouse. Instead, they’re alive and filled with terror when they’re stunned and shackled and their throats are slit.”

Maher also recently weighed in on environmental issues, claiming the Republican Party needs to do more to save the planet. In a “Real Time” segment last month he said, “the ice is melting and rising oceans are going to swallow Miami.”

He continued, “What is it with Republicans and the environment? They never waiver in their commitment — to do nothing.” He added that the White House’ efforts should be focused on building a sea wall, instead of the proposed US-Mexico border wall.