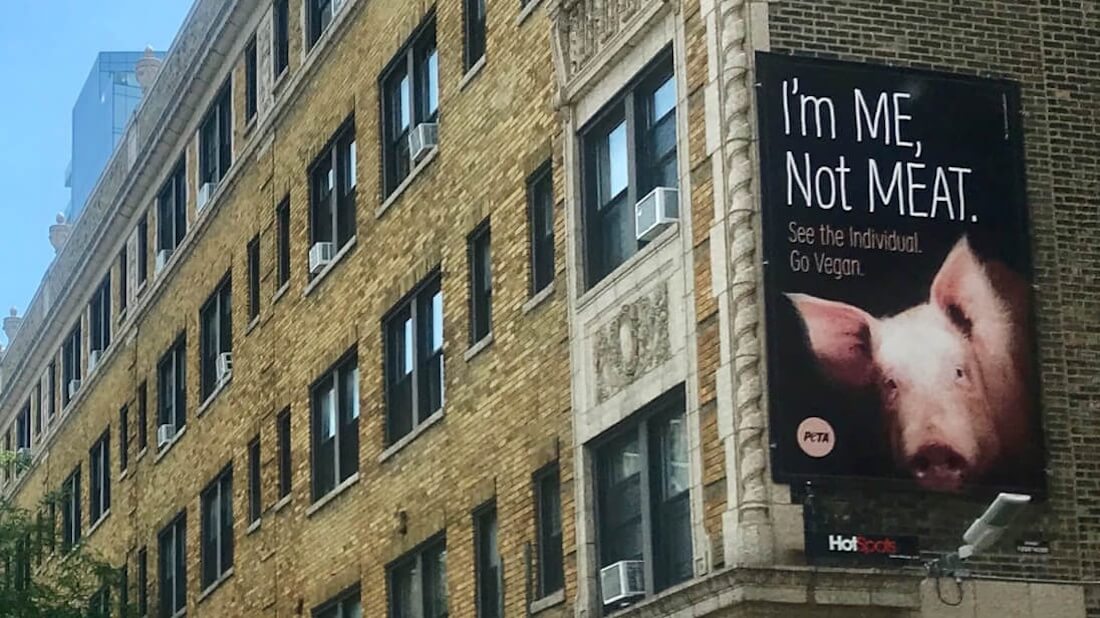 Ahead of a summer of meat-heavy festivals, animal rights organization PETA has erected four vegan billboards in the city of Chicago.

According to PETA, Chicago has not only long supported the meatpacking industry, but it is also located in one of the U.S.’s top pork-producing states, Illinois. The billboards, which either feature a cow or a pig, will include the slogan: “I’m ME, Not MEAT. See the Individual. Go Vegan.”

“Just like humans, cows and pigs are made of flesh and blood, feel pain and fear, have unique personalities and value their own lives,” said the president of PETA Ingrid Newkirk in a statement. “PETA’s thought-provoking ads encourage everyone to forgo the flesh of sensitive animals in favor of Gardein’s Porkless Bites, Beyond Burgers, Fakin’ Bacon, fruits, veggies, nuts, pasta, beans, grains, and the many other hearty and delicious vegan options available today.”

PETA and other animal rights organizations often use billboards and advertisements as a method of getting their message across to the public. Ireland-based initiative Go Vegan World was the first organization to place vegan advertisements in Europe. Sandra Higgins, the founder and director of the Eden Farmed Animal Sanctuary (the creator of Go Vegan World), believes billboards and ads help people connect whats on their plate, with the animals they know and love.

“If you asked most people if they think it is wrong to unnecessarily harm other sentient beings, they would answer that it is,” Higgins explained. “This is because we all know that other animals feel. They have the capacity to experience pleasure and are harmed when we deprive them of the opportunity to do so…like us, they have an interest in continuing their lives and do not want to die. Therefore, most people already hold the values that underpin veganism.”

Similar advertisement campaigns to PETA’s Chicago billboards have been run in Los Angeles, Toronto, Little Rock, Rhode Island, Adelaide, and in many more cities and towns around the world.