If you have a bad diet, you’re gonna have bad poops, according to vegan singer Billie Eilish.

The 17-year-old “Ocean Eyes” singer appeared in a recent Pitchfork video interview where she was asked to rate things. Eilish deemed prom “overratted as hell” (“prom? ew”) but pooping received a rave review.

“Pooping is one billion percent underrated,” Eilish said. “Pooping is my favorite part of the day. There was one day I pooped eight times… That was the best day of my life. And they were all solid, good poops too.”

“I’m really talking about poop out here,” she added before diving deeper into her feelings about BM. “It’s really about your diet, because you can have miserable poops. People who don’t like pooping are probably people who eat like [expletive].” She added an anecdote about what might happen if you eat a lot of Flaming Hot Cheetos.

Eilish is a vocal vegan — and plant-based diets are known to be high in fiber, which is key to a healthy digestive system. Recent research shows that diets rich in whole grains, fruit, and vegetables is more likely to pass well-formed poop frequently. A 2016 had similar findings — people who ate a plant-forward diet over a 12-week period reported less constipation.

Eilish addresses her iron deficiency at the beginning of the video, adding that she used to suck on pennies and metal jewelry.

Along with calcium and vitamin B12, iron is one of the major concerns many have over a vegan diet. It’s essential for blood production and is also an important part of a healthy immune system. While meat and seafood are cited as being good sources of iron, iron deficiency is actually common, regardless of diet and there healthy ways to prevent it.

“I think my mom gives me iron pills or some [expletive]… She’s nodding her head over there,” Eilish said in the video.

There are also iron-rich plant-based foods like beans and legumes, dark leafy greens, nuts and seeds, and grains. Anyone suspecting an iron deficiency should consult with their doctor before taking supplements.

The 17-year-old artist took to Instagram last June to speak out about animal cruelty in the food system. She shared undercover footage of the dairy industry taken at Fair Oaks Farms, a facility in Indiana that supplies cow’s milk to dairy brand Fairlife, a subsidiary of Coca-Cola. Fairlife is advertised as a “premium” line of milk with “grass to glass” traceability.

According to the video, it is the largest undercover dairy investigation to date.

“I keep my mouth shut most of the time about this because I believe everyone should do, eat, and say whatever they want… and I don’t feel the need to shove what I believe in in anyone’s face,” Eilish wrote on an Instagram Story.

“But man… if you can watch the videos that I just posted and not give a [expletive] that it’s YOU contributing by LITERALLY EATING the creatures that are being fully tortured just for your pleasure. I feel sorry for you,” she said to her 26.1 million followers. 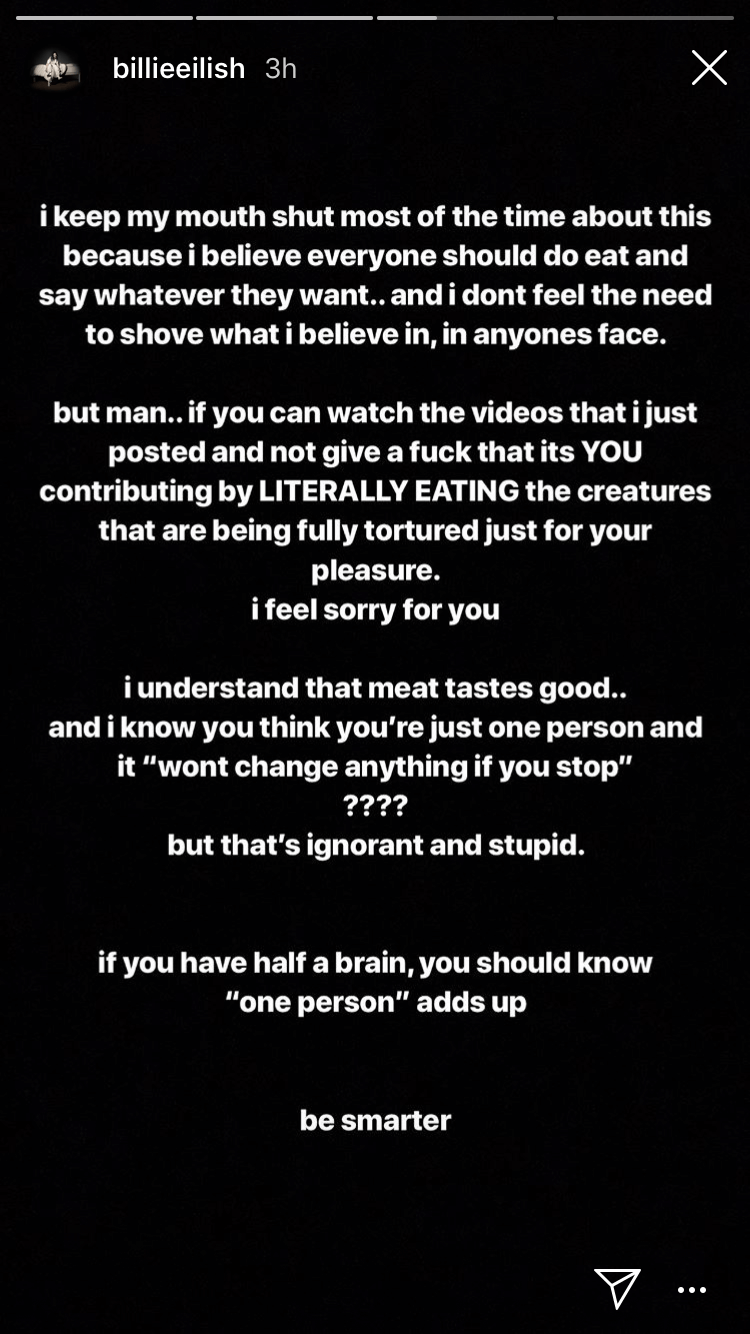 The footage shows dairy farm workers punching, pushing, dragging, and throwing calves, who are separated from their mothers shortly after being born, leaving mother cows bellowing for their babies. The young animals are force-fed bottles and if they resist drinking, they are beaten or stomped on. The video shows them being burned and hit with branding irons and dead calves being left in piles hidden away from the public. The baby cows are packed into trucks to be sent away for slaughter.

“I understand that meat tastes good… and I know you think you’re just one person and it ‘won’t change anything if you stop,'” Eilish continued. “But that’s ignorant and stupid.”

She notes that each person that makes a change adds up.

Eilish went vegan in 2014, according to a blog post she wrote. She was inspired to make the change for “a lot of reasons,” she said, including dairy’s impact on health and animal welfare — “leave animals alone,” she wrote.

The star also recently celebrated the 10th anniversary of the Meat-Free Monday campaign. “Help the world. I try,” she told her millions of Instagram followers.