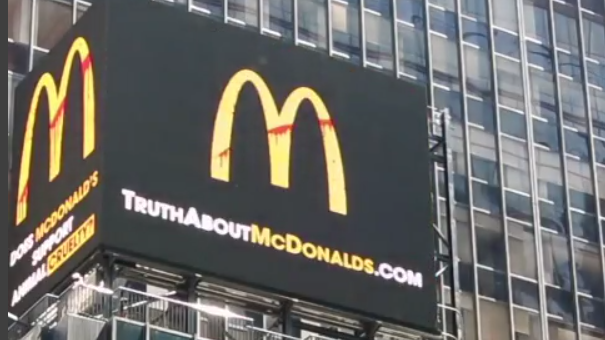 The new advertisement, commissioned by a coalition of animal rights groups, including Mercy for Animals (MFA), Compassion Over Killing, and Animal Equality, reveals the suffering of chickens on McDonald’s factory farms. According to MFA, the ad, which launched last June, has been renewed for the new year.

“Each year, hundreds of millions of chickens suffer tremendously on farms that raise chickens for McDonald’s menu items,” Animal Equality states on its web page for its campaign.“These birds are bred to be so unnaturally big their own legs can’t support their weight. They are crammed into dark sheds and trapped in filth, unable to engage in most natural behaviors. These horrific conditions are unacceptable.”

Other fast-food chains, including KFC, Subway, Burger King, and Jack in the Box, have all committed to making changes to their animal welfare policies. McDonald’s, however, according to Animal Equality, “continues to drag its feet.” As the biggest fast-food chain in the world, McDonald’s has tremendous influence. As the campaign highlights, the chain “has the power to eliminate the cruelest farming practices used by its producers and reduce the suffering of millions of birds.”

One way to reduce the suffering of animals is to introduce more vegan options. The success of the McVegan Burger in Sweden has shown that McDonald’s customers are interested in purchasing new, innovative animal product-free options. Whilst the new burger is available in Finland, too, it is not currently available in any other country, despite McDonald’s strong international presence.

The use of billboards to get a message across is popular among animal rights organizations. Around the world, advertisements are consistently being used to convince people to rethink their consumer habits. Sandra Higgins, the founder of Go Vegan World, who launched the first vegan advertisements in Europe, believes billboards get through to people on an emotional level. “If you asked most people if they think it is wrong to unnecessarily harm other sentient beings, they would answer that it is,” she said. “The aim of Go Vegan World is to expose this inconsistency between our values and our behaviour. We claim to respect fact, yet we live according to myth.”