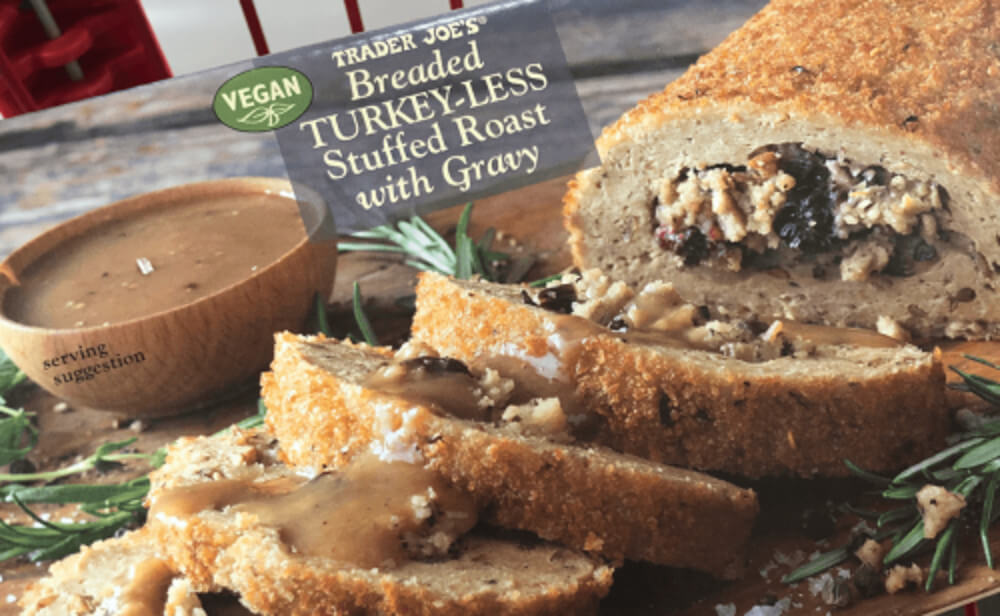 Trader Joe’s vegan Breaded Turkey-Less Stuffed Roast with Gravy is not a new product, but its popularity means that the meatless roast typically returns each year around Thanksgiving and Christmas. The holiday centerpiece is made from a blend of soy and seitan, a plant-based protein made from vital wheat gluten, and is filled with an herbed, cranberry-speckled stuffing with gravy for serving.

Instagram user @traderjoesvegan, which documents the vegan finds within Trader Joe’s stores, announced that the much-loved roast has returned: “The roast has arrived,” the post announced. The meat-free turkey roast was spotted by a customer in Portland, Oregon but members of the private Facebook group Vegan Trader Joe’s have reported finding it at stores in other states.

Given that 52 percent of Americans are trying to include more plant-based foods into their diets, this year, Trader Joe’s vegan offerings may be more popular than ever. Known for its discount prices, the chain has fast been making a name for itself as a plant-based food haven.

The chain has also launched several sown-brand vegan products that are available all year round, including almond, cashew, and macadamia milk, a grab-and-go lunch rainbow wrap, and a convenient jackfruit curry ready meal.

It also comes as little surprise that Trader Joe’s plant-based roast is returning, given the growing popularity of vegan twists on festive classics.

Tofurky, one of the original commercial vegan meat companies, announced this summer that it is on track to sell 5 million Tofurky Vegan Holiday Roasts by Thanksgiving of this year since the product’s debut in 1995. The company also decided to make its classic festive ham-style roast available all year round. For the holiday season, it will offer a dairy-free chocolate espresso cheesecake.