BrewDog has created delivery hubs in its BrewDog and Draft Houses and “virtual kitchens.” They will deliver Biff’s branded burgers, wingz, and fries to the region.

In a press release, Biff Bloom-Burrows, Biff’s co-founder, said the company’s overall mission is to give as many people as possible the opportunity to eat delicious vegan food.

“[C]reating a delivery-only operation means that consumers across the UK will now be able to have a ‘Biff’s Night In,” he said.

He added that partnering with BrewDog has been a “very exciting opportunity” to make nationwide plant-based food delivery a reality. “We share their innovative punk spirit, so combining their strength in physical sites with our passion for creating high-quality, plant-based food makes for a powerful proposition to really own more of the UK delivery space,” he added. 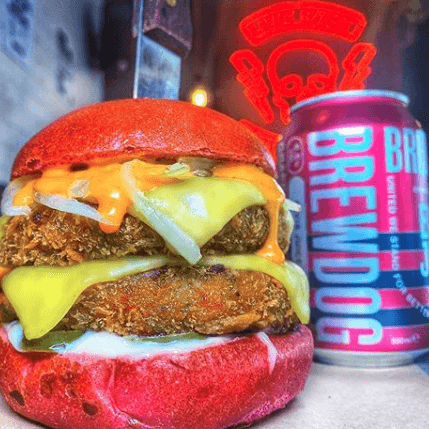 The duo joined forces last year for the first time to open an all-vegan bar in Dalston, London.

Biff’s launched in 2017. It started out as a street food stall, called Biff’s Jack Shack. The food stall has now expanded to brick and mortar sites across London. Biff’s has also become a national wholesale foodservice business. Its plant-based products are offered on a number of restaurant menus across the country.

“At BrewDog we love collaborating with innovators and creators. In Biff’s we found our perfect match, pushing boundaries in the world of vegan food, masters of their own craft and incredible attention to detail when it comes to their product.” James Brown, BrewDog’s retail director, explained.