Vegan foodies living in the UK just got one more vegan option. And it’s a hit with the locals. Brighton’s new KFC-style vegan fried chicken restaurant sold out its first day open.

The plant-based chicken shop, called Really Happy Chicken, opened its doors on August 4. And within just a few hours, it sold out of its seitan-based chicken.

The vegan chicken shop also carries a number of sides. These include corn on the cob and kimchi, as well as dairy-free shakes in flavors like Bourbon, Oreo, and FlufferNutter. 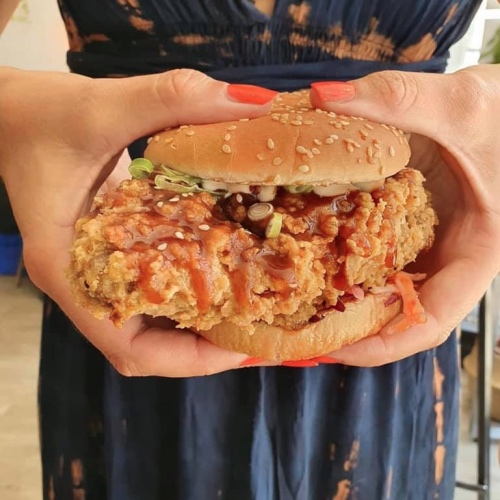 Vegan Fried Chicken in the UK

Really Happy Chicken may be the newest vegan fried chicken shop in Brighton. But it’s not the first time Brits have gotten their hands on crispy, plant-based fried chicken.

In January, KFC added vegan chicken to the menu of its 900 UK locations. Dubbed The Zero Chicken Burger, the meatless chicken burger features a Quorn patty. It’s coated in the company’s signature 11 herbs and spices.

The London-based Temple of Seitan opened its doors in Hackney in 2017. It’s billed as the world’s first vegan fried chicken restaurant. And in 2018, the fast-food restaurant opened its second location in Camden.

In a press release, Biff Bloom-Burrows, Biff’s co-founder, said the company aims to give as many consumers as possible the opportunity to try tasty vegan food.

“[C]reating a delivery-only operation means that consumers across the UK will now be able to have a ‘Biff’s Night In,” he said.