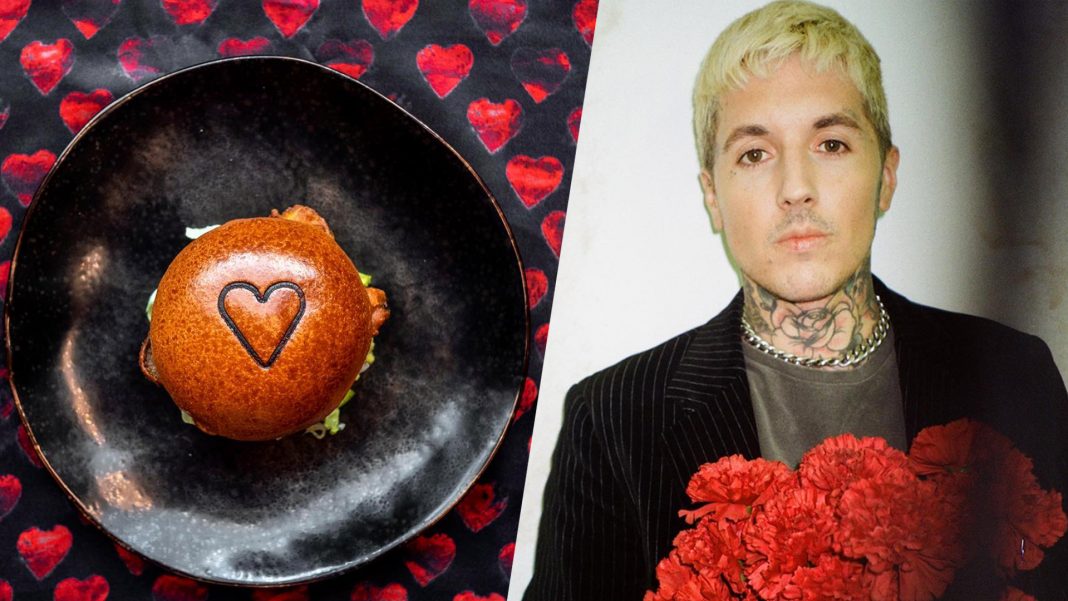 Fans attending the Bring Me the Horizon (BMTH) gig today in Sheffield, South Yorkshire, will be able to enjoy a range of vegan food, including meaty plant-based burgers.

The rock band – known for songs like “Can You Feel My Heart” and “MANTRA” – will perform at a venue called Church – Temple of Fun, which was opened by BMTH’s frontman, vegan musician Oli Sykes.

Vegan eatery Make No Bones serves up plant-based comfort food at the venue, including pancakes, BBQ seitan ribs, and avocado wings. For BMTH’s gig – put on to celebrate the release of the band’s sixth studio album “amo” – the food company will offer a special menu that includes a vegan “amo burger.”

The burger features a plant-based beef patty by Beyond Meat, fried pickles, avocado, salad, and dairy-free cheese, all packed into a love heart-branded brioche bun.

The “BMTH burger” is also available, which features vegan fried chicken dunked in Korean BBQ sauce along with lettuce, pickled veg, and kimchi, served in a black bun.

Bring Me the Horizon and Veganism

Sykes spoke to vegan meat brand The Fry Family Food Co. about his plant-based lifestyle. “I have been vegetarian for almost 15 years now, and I made the transition to being vegan slowly about 5 years ago,” he said in 2017, admitting that it took him “a while to fully convert.”

He revealed that he went vegan for health reasons after reading a book called “Skinny Bitch.” The book “dissected meat, eggs, dairy, sugar, everything, and it just made me feel sick to my stomach,” Sykes explained.

“The fact that we are the only creatures on earth that drink milk after being babies, not to mention another species milk, for no good reason whatsoever (and before you say calcium, go read about it), well it opened my eyes a bit,” the musician added.

He encouraged fans to do the best they can when transitioning to veganism. “In this world, its impossible to be truly vegan,” he said. “Don’t be too hard on yourself … So if you fall off the wagon, remember, it doesn’t matter in the grand scheme of things, just don’t go ‘f*ck it’ and go on an all out dairy bender.”

He added that since ditching animal products, he has come to “appreciate food.” Sykes added, “Once you get into it, you wont go back.”