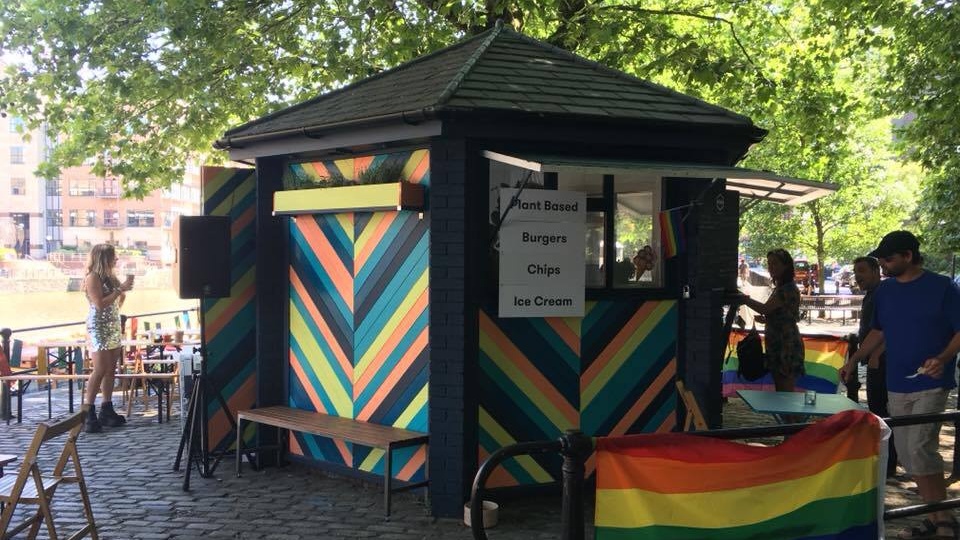 The demand for vegan food in England’s trendy city of Bristol is so great that a disused kiosk was transformed into a new vegan eatery, aptly named Kiosk.

The vegan food stand is already popular. According to Bristol Live, Holden says, “We’ve already got a few regulars and some people have come just to try our mushroom balls as they’ve heard great things about them, which is really positive.” She adds, “It’s been a massive learning curve so far but it’s been great and we’ve had amazing feedback.”

Kiosk is already inventing new dishes to add to its menu, with the stand’s chef, Luke, “working out what’s popular and what people want.”

Who says being dairy-free is dull? Not us!Come down to say hi and treat the kids (or yourself ?) this Harbor Festival to a milkshake. Choose from either Oreo cookies and cream ? ?or vanilla, strawberry sauce and unicorn sprinkles ??? ❤️✨ #milshakes #dairyfree #shakeitup #boystotheyard #festivalfun #bristolfoodies #bristoldockside #icecream #sprinkles #sparkles #paperstraws #paperstraws♻️ #harborside #bristol247 #veganfood #poweredbyplants #slurp

The new vegan venture is off to a busy start. Holden says, “We just want to reignite a bit of life into the area as it’s a great space overlooking the river.”

She already plans to open the kiosk up for breakfast and invest in a coffee machine so professionals can grab a vegan coffee pick-me-up on their way to work. A new winter menu is also in the mix, including warming items like soups and porridge pots.

The dishes will also have a personal touch, with ingredients fresh and locally made. The plant-based milk used in porridge and coffee will be homemade on site.

Holden even plans to host events outside of the kiosk over the next few months, such as live music and a Christmas market.

Bristol is a hub for vegan food and events, making it an ideal location for this new venture. The demand for plant-based food in the area even led meaty fast-food chain Oowee to launch an exclusively vegan diner, which is due to open mid-September.

Kiosk is currently open Tuesday through Friday from midday until four pm, and on some bank holiday weekends. It is working on extending to evening hours.