“Hamburgers: the cornerstone of any nutritious breakfast,” said Samuel Jackson’s character, Jules Winnfield, in Quentin Tarantino’s legendary 1994 American crime film, “Pulp Fiction.” But he was wrong, turns out the cornerstone of any nutritious breakfast is vegan sandwiches, at least according to Bun Fiction, Bristol’s newest and “filthiest” (in the good sense of the word) sandwich shop. The pop-up is proving that vegan sandwiches are the ultimate cornerstone food choice with its “Pulp Fiction” themed buns.

Having served its sandwiches at Bristol markets for years, Bun Fiction hopes to have a greater impact on the city’s food scene with its new Kings Street residency. With a revamped, specially designed menu offering gourmet plant-based sandwiches, along with sides like dirty fries, vegan ribs, and chicken wings, the street food connoisseurs hope to appeal to dedicated vegans and meat-eaters alike.

Founded by chef Harry Ferguson-Wallace, the brand started out as a meat-based sandwich company. However, adopting a vegan diet himself, and noting that the pop-up’s veggie sandwich was a consistent best-seller, Bun Fiction went fully vegan. However, not wanting to deter its meat-eating customers, Ferguson-Wallace was determined to create flavorsome plant-based buns that would appeal to flexitarians.

He told Bristol Live, “We are trying to bridge the divide between vegans and omnivores. There’s a stigma attached to being vegan about being very preachy but we are actually seeing a lot of omnivores eating our food too.” The brand achieves this by recognising that “Not all vegans eat lettuce and greens” and creating sandwiches which “[mimic] classic dishes: meaty favourites for the vegan market.” 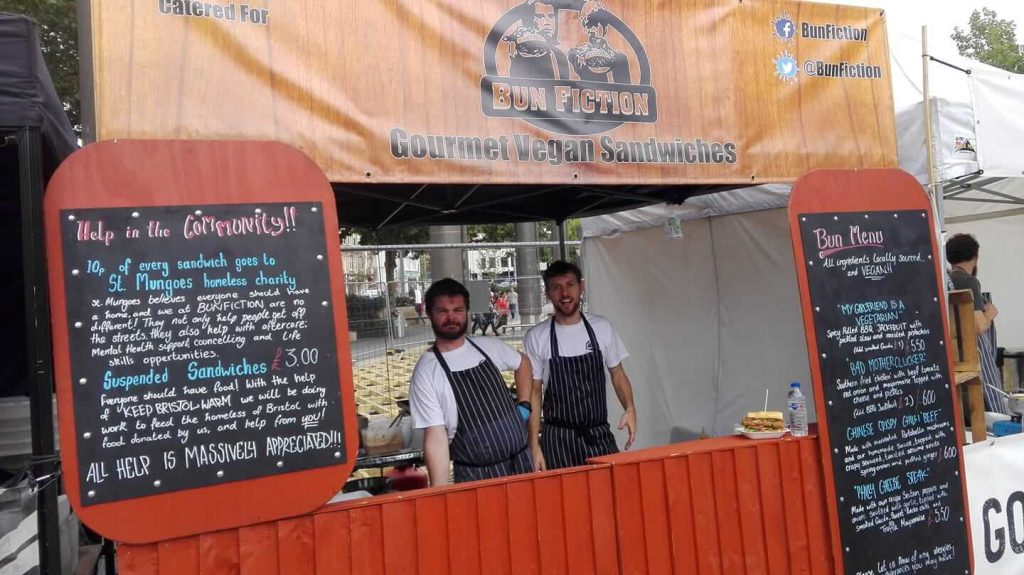 In keeping with the brand’s namesake, Quentin Tarantino’s “Pulp Fiction,” each sandwich is named after the film’s favourite quotes. The flagship sandwich, containing southern fried seitan “chicken” and served with smokey mayo, tomato, red onion, gherkins and cheese in a ciabatta roll, is called the Bad Mother Clucker. Also available is the Philly Ain’t No Country I Ever Heard Of sandwich. Imitating a traditional Philly cheesesteak, this bun includes seitan steak strips sauteed with peppers, onions, and garlic and topped with smoked vegan gouda, paprika, and sweet ancho chilies.

To quote Vincent Vega, John Travolta’s character in the film, “It’s the little differences. I mean they got the same sh*t over there that they got here, but it’s just – it’s just there it’s a little different.”  Bristolians can now permanently find Bun Fiction’s unique vegan sandwiches at Kongs of King Street.