The Hatchet Inn was established 413 years ago in the year 1606. It’s known for alternative rock and metal nights and its cozy atmosphere.

“We stopped doing in-house food earlier this year and instead welcomed our first ever pop-up kitchen called Soy Ahoy,” events manager and bartender Keshia Davies told the BristolPost. Although the food menu is 100 percent vegan, Davies notes that the bar still has some non-vegan snacks.

Soy Ahoy specializes in vegan comfort food and pub grub, including tofu skewers, mac and cheese, and burgers. It’s already a big success. It hosted its first vegan Sunday roast dinner at The Hatchet Inn on October 6, which sold all 60 tickets. 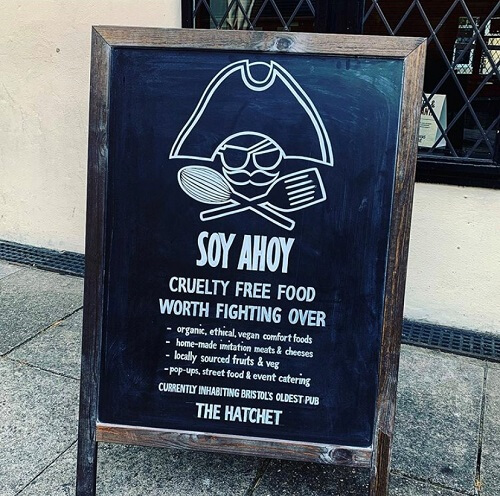 How The Hatchet Went Vegan

Max Fry, the executive chef and owner of Soy Ahoy, had been working as a freelance vegan chef and was putting together the framework for his business. He then came across an ad for a resident food vendor at The Hatchet. He then met with Drew Short, the general manager.

“I told him right away that I only intended to serve a plant-based menu,” Fry told LIVEKINDLY. “I was just so tired of producing food that didn’t match my own ethical beliefs – and to my surprise Drew thought it was a great idea. It turns out that The Hatchet already had a healthy amount of vegan/vegetarian customers, or at least an open-minded clientele ready to support a local start-up business. We were open within weeks, and then the hard work really began!”

Fry has been “pretty overwhelmed with the response from our lovely customers,” and not just from the local vegan community. “Bristol is a very open-minded city, and I’ve some die-hard meat lovers come and try the food – usually dragged along by their vegan friends and family,” said Fry. “I’ve had a couple of omnivores demand to know how we make our burgers, how we get the marble effect in our bacon, and how we make the ‘eggy’ scrambled tofu, and I’m always more than happy to answer questions, talk about my own path to becoming vegan, and the immense nutritional value that you can find in plant-based diets.” 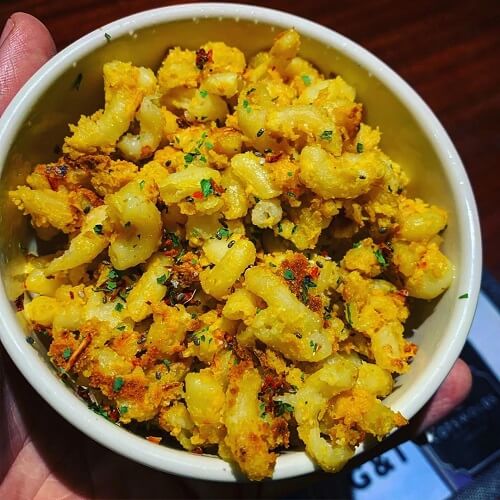 The Vegan Capital of the World

The Hatchet Inn’s entirely vegan menu isn’t an anomaly. Last January, a study by Chef’s Pencil named Bristol the world’s best city for vegan food. “Bristol’s concentration of vegan-related searches on Google surpassed every other city in the world,” said the report.

“The vegan community in Bristol is a force to be reckoned with,” said Fry. “Always sharing new food and promoting the ideology that we all love so much, and always ready to support new vegan businesses!”

The brick-and-mortar was a result of the meat-heavy business’s vegan success on Deliveroo. Last July, the Oowee team announced that all future locations would be vegan.

“We decided to make this decision due to the massive demand for vegan food far outweighing the demand for meat within our company,” co-owner Verity Foss told LIVEKINDLY in an email. “When we opened our vegan store we had an overwhelming response and it was the best decision we ever made.”

Soy Ahoy serves vegan food at The Hatchet pub from Wednesday through Saturday from 5pm.