The Department of National Parks and Wildlife Ezemvelo KZN Wildlife also worked on the project. 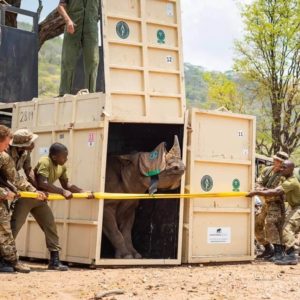 It was one of the biggest international rhino relocations so far, seeing to animals transported by land and air. Black rhino populations fell dramatically in the 20th century at the hands of European hunters and colonizers.

Between 1960 and 1995, black rhino numbers fell by 98 percent to just 2,500, according to the WWF (World Wildlife Fund). Their populations have made a dramatic recovery. Today, there are around 5,500 living in the wild. But the species is still critically endangered. They are still targeted by poachers, who kill the animal to sell their horns on the black market.

He told Sky News: “Not only do we share skills with the rangers, improving their efficiency and ability to patrol larger areas, but it also provides a unique opportunity for our soldiers to train in a challenging environment. Helping with the rhino move was a fitting end to our time in Malawi, getting up close to the animals we are here to help protect was an experience the soldiers won’t forget.”

So far, British troops have helped train 200 rangers in Malawi. There have been no “high-value species” poachings since 2017.

Defense Secretary Ben Wallace told Sky News: “Working with local communities, host governments, and wildlife groups is key to our approach, we want to see sustainable, community-led solutions that help promote security and stability for both the people and wildlife of Africa.”

In South Africa’s Kruger National Park, officials are considering taking unique action to protect wildlife. The Times reports that tourist selfies are attracting attention from poachers by unwittingly giving away the location of endangered animals. The park is considering jamming phone signals as a result.

The UK government has committed £36 million between 2014 and 2021 to a counter-poaching ranger program funded by the Department for Environment, Food and Rural Affairs.