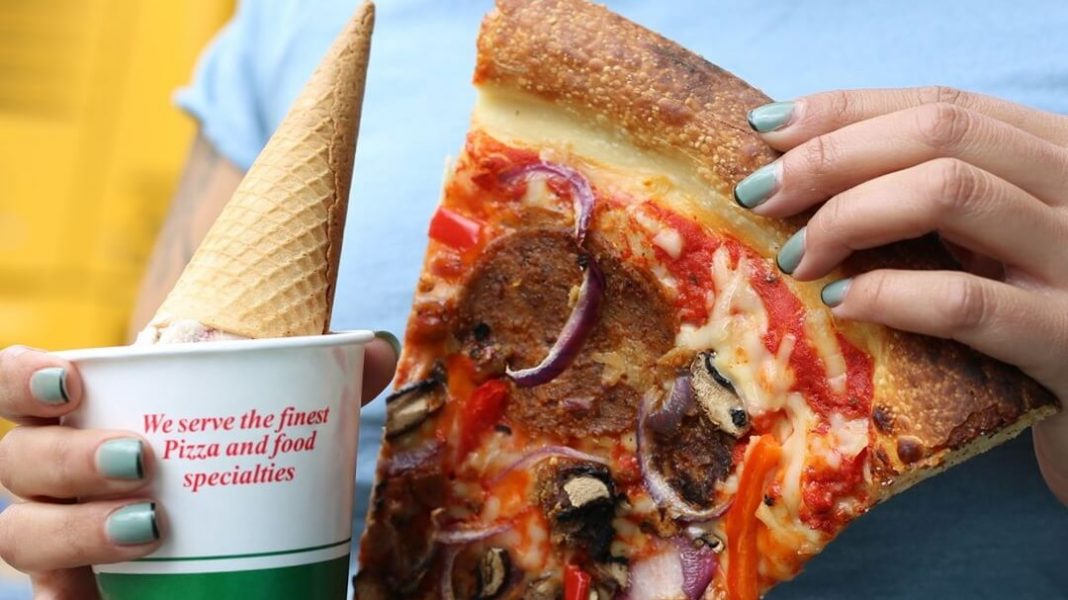 Since opening in 2016, Brooklyn’s first-ever vegan pizza shop Screamers has proved to be a hit. According to Go Dairy Free, the pizzeria now serves more than 1,500 slices of its plant-based pies per day.

Founded by the teams behind Champ’s Diner and High Five Food & Drink, Screamers – located in the neighborhood of Greenpoint – offers 13 unique pizzas. Each is topped with vegan cheeses, such as almond ricotta and parmesan, and a variety of vegan meats like seitan sausage and Canadian fake’n. It also offers rotating weekly specials as well as customizable options.

Its menu is so popular that the restaurant recently opened a second location in the Crown Heights neighborhood. The new venue is slightly larger than the Greenpoint location, with seats for 30 people.

According to kitchen manager Brian Rowe, the pizzeria’s unusual name comes from one of its most used ingredients: the mushroom. When the ingredient goes on to the grill, it makes a loud sizzling noise, like a scream.

?? sweater weather and pizza go hand in hand ? thanks for the beautiful Screamer, Artichoke, and Buffalo ? by @sophisr

Across the U.S, consumers are becoming increasingly interested in plant-based foods for a number of reasons including animal welfare, the environment, and health. According to Aimee Kuge, High Five’s marketing manager, Screamers wants to cater to these people through the format of the traditional New York slice shop.

“Vegan food can be accessible to everyone,” she said. “We think it should be available all over, and cater to a variety of cravings and needs.”

She added, “Slice shops are such an institution here. We’re proud to be New York’s ultimate spot to grab a vegan slice for three years running. And we can’t wait to grow in this bigger space that welcomes even more people to chow down.”

Across New York, the vegan restaurant scene is expanding. In fact, personal finance company Wallethub named the city the best place in the U.S. for plant-based food earlier this year.

High Five is a significant part of this growth; not only has it helped to launch Screamers, and its second location, but it also recently opened Hartbreakers in Bushwick, which, according to Go Dairy Free, is already known for its signature seitan chick’n sandwiches.