In May 2019, vegan meat brand Beyond Meat made history by going public. This marked the first time that a plant-based meat brand hit the stock market, perhaps signaling to investors that next-generation of plant-based meat could be a valuable asset.

Beyond Meat is no longer the obscure meat-free brand that was once relegated to the vegetarian section of the supermarket. Known for creating products with a flavor and texture nearly identical to that of beef and pork, the brand has attracted the attention of meat-eating consumers. This has helped it land on the menu of mainstream restaurant chains and secured a distribution deal in China with some of the biggest names in fast-food. 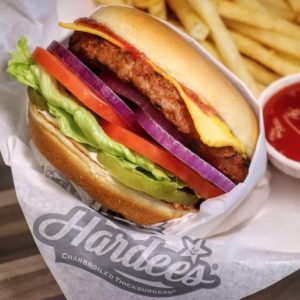 The Beyond Burger has crossed over into mainstream restaurants.

The History of Beyond Meat

Over the years, Beyond Meat has netted more than $122 million from investors including Microsoft co-founder Bill Gates and meat processing giant Tyson Foods, which sold its stake in the company shortly before it went public.

In 2009, Ethan Brown, who worked in the energy sector on proton-exchange membrane fuel cells, founded Beyond Meat.

His goal was to create a sustainable alternative to one of the world’s most pressing issues: climate change. Animal agriculture’s devastating effects on the planet have been well-documented. Factory farms account for 14.5 percent of global greenhouse gas emissions, according to the Food and Agriculture Organization of the UN. Further still, the mass slaughter of animals for food has been linked to air and water pollution, ocean dead zones, and biodiversity loss.

Brown’s solution idea was simple, but ambitious: create plant-based meat that targeted meat-eaters instead of vegans and vegetarians. Not only would it need to look and taste like the animal-based version, but also it would need to be marketed where omnivores shop: in the meat aisle. 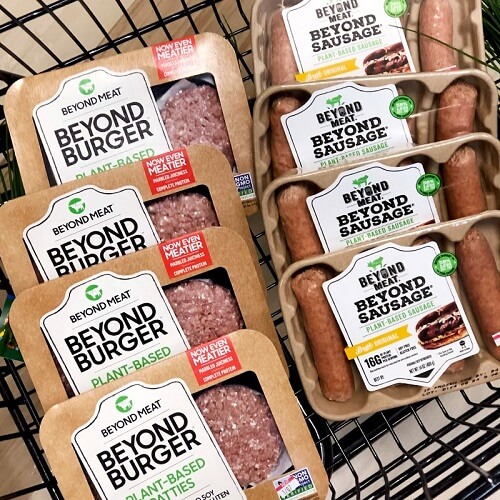 Beyond Meat has come a long way since its chicken-free strips.

Already popular among meat-free diners and a growing flexitarian consumer base, Beyond Meat sought to reach an even bigger base. In 2016, it launched the Beyond Burger. It has since become the poster burger for the meat-free shift. The popular pea protein-based “burger that bleeds” was first launched in the meat aisle of Whole Foods. The unconventional move was a success: according to Brown, 93 percent of people who buy the Beyond Burger are meat-eaters. Its successors, a range of pea protein-based pork Beyond Sausages, followed in late 2017. Last year it launched Beyond Beef, a marbled ground beef version of its popular burger meat. The Beyond Breakfast Sausage, in the flavors Classic and Spicy, launched in early 2020.

Beyond Meat has made its mark outside of the supermarket as well. BurgerFi became the first national chain to launch the Beyond Burger in the summer of 2017. Other smaller burger chains followed. These include Wahlburgers and Bareburger and larger chains like Hardee’s, Carl’s Jr., Denny’s, and even Disney theme parks. It developed a breakfast sausage patty for Dunkin’, which launched nationwide in November 2019.

Beyond Meat also create plant-based meatballs for Subway, which trialed at select U.S. locations and launched in Canada last year. It is also working with KFC on vegan fried chicken, which has been trialed twice so far: once in Atlanta last summer and in 70 locations in Charlotte, North Carolina, Nashville, Tennessee, and the surrounding areas earlier this year.

Beyond Meat recently announced a partnership in China with Starbucks as well as Yum! Brand Foods, parent company to KFC, Taco Bell, and Pizza Hut. It will soon open its first European facility in the Netherlands to boost its output capacity in the region.

“If you look at our modus operandi, we look for marquee customers in each of the markets we enter, and we probably wouldn’t be making this level of investments in Europe if we didn’t think that there was something there for us in terms of large, quick-service restaurants,” Brown told the Financial Times earlier this year.

What the Experts Say

Is Beyond Meat stock worth buying? If you’re researching investment opportunities into the space, you’re likely aware that the California-based brand launched one of most successful IPOs, listed as BYND, in nearly two decades. It initially priced its IPO at $25 a share and experienced first-day pop of 163 percent, according to Market Watch. Beyond Meat went public at $1.5 billion and less than three months later, it was worth more than $13 billion—a 859 percent increase from the initial offering.

So, is it time to buy Beyond Meat stock?

Since the initial IPO offering, prices of shares have fluctuated and analysts have highlighted a few concerns. Motley Fool highlighted growing competition from other brands. Price is another issue. But, while Beyond Meat products are currently more expensive than their animal-based counterparts, the company is working toward price parity.

Beyond Meat has continued to grow despite initial concerns. It is opening two facilities in the Netherlands and kicked off its partnership with major fast-food restaurants in China.

A recent analysis of Beyond Meat acknowledged its appeal not only among vegans and vegetarians, but also among mainstream consumers. However, the analyst noted concern over the stock’s fluctuating price.

Jim Cramer, host of CNBC’s “Mad Money” and a former hedge fund manager, believes the opposite. “Going against Beyond Meat is going against history,” he said in May. Cramer linked Beyond Meat’s staying power to the coronavirus pandemic, noting that the way it has exposed issues within the meat industry has strengthened the brand.

“The price of [regular] meat is going to go up,” Cramer said. “And the protein that skips the whole meat chapter is going to do well. Beyond Meat is one of the most dangerous shorts in this market.”

“I think the pandemic is saying ‘start eating plant-based,'” he continued. “…Remember, there’s a glitch in eating protein and that glitch is that it goes through an industrial cow.”

Other analysts advise that it may be wise to buy Beyond Meat stock. Investor Place notes that the company is not only disrupting the restaurant industry, but also its ambitious expansion plans. Due to fluctuating prices, author Chris Lau says to buy when the price dips.

Disclaimer: All opinions in this article belong to LIVEKINDLY and are not the recommendations of Beyond Meat.