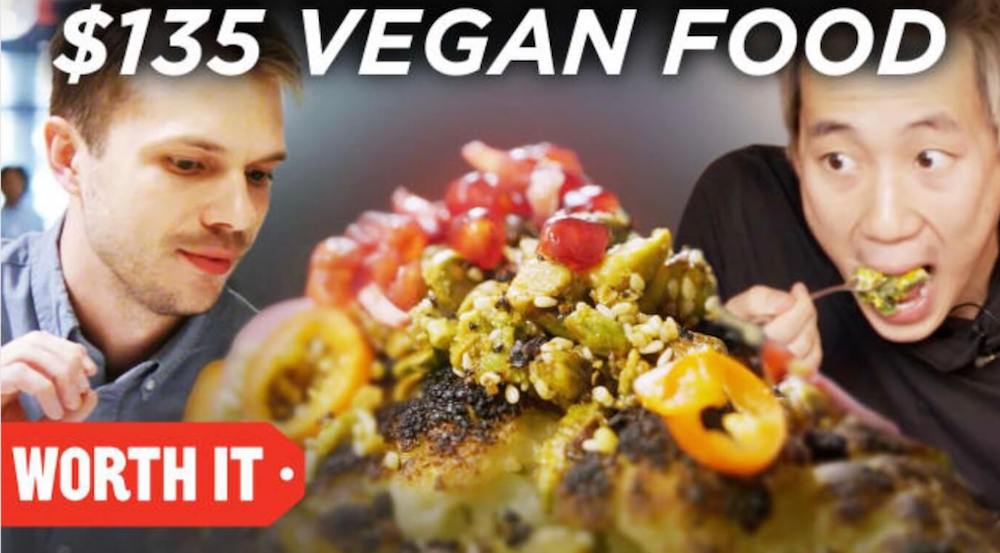 Buzzfeed. It’s loud, over-the-top, millennial-driven content is as addicting as a pint of vegan Ben & Jerry’s ice cream. You just can’t stop until you’ve finished the whole thing. This pop culture media source has gained countless followers through its engaging YouTube videos, shot in a style that allows the viewer to live vicariously through the hosts’ experiences. The latest series, “Worth It,” is now in its fourth season and receives millions of views per episode. The drool-inducing food subjects were decidedly not vegan until April 1, when Worth It $10 Vegan vs. $135 Vegan premiered. In just under a month, the fourteen-minute clip has received just under 6 million views.

“Worth It” follows foodie friends Steven and Andrew, along with the quiet, slightly awkward cameraman Adam, on single-subject “ultimate food adventures.”  The team tastes the food at three price points, “affordable, middle tier, and luxury,” to determine which meal is “worth it.” In the show’s first vegan episode, Steven and Andrew travel to New York City to sample the best the Big Apple as to offer. From a $10 vegan shrimp po’ boy to a $135 multi-course meal, the duo got a taste of the delicious variety of plant-based cuisine (cameraman Adam scavenged the leftovers).

According to Steven, the food topics for each season are based on two factors – what is hot in food trends, and what they want to introduce to the audience. Steven, who doubles as a host and producer, said, “There’s a strong curiosity toward vegan food and vegan culture. While Adam, Andrew, and I are not vegan, we wanted to show that vegan food can be as delicious as a meat-based dishes – even to people who eat meat on a regular basis.”

“We’re interested in a unique narrative that covers a wide variety of vegan food, so people can come away with a new perspective and options based on their taste,” he continued.

Have you seen our newest episode yet?! We were in New York trying the best Vegan food at three different price points! Make sure to check it out now!

To highlight the variety of vegan food in New York, the team visited three distinctly different restaurants. The affordable option was a po’ boy sandwich from Seasoned Vegan in Harlem. The pair raved over the yam-based, beer-battered shrimp. “It’s a very satisfying whole bite experience,” Andrew remarked. Steven followed with, “Is that better than shrimp?” “It’s just a great sandwich” Andrew concluded. In an interview with LIVEKINDLY following the episode, Steven admitted that this dish was his personal favorite; “mind-blowing,” he decreed.

The middle tier venue featured Avant Garden, a small plate concept served in a chic, upscale setting. Steven and Andrew sampled the avocado salad, hen of the woods mushrooms, celery root small plate, and sunchoke toast, paired with a glass of Sicilian wine and a fresh young coconut for $64. Steven did a “happy baby dance” to show his love after each bite. “I never thought I’d be licking my fork after a vegan dish,” Andrew said.

En route to their next destination, the team entertained the audience with vegan facts and car games, such as “What are Your 3 Most Favorite Vegetables?” They also asked the existential question, “If aliens came to earth would they be vegan?” We’re hoping that’s a yes.

Finally, the team prepared for their most expensive meal – a multi-course, vegetable-focused dinner at abcV, worth $135. The restaurant sources its produce from the Green Market in Union Square, in line with its mission to ensure the menu is “clean and fresh.” Steven and Andrew feasted on green chickpea hummus, beet salad, grilled shitake mushrooms, a carrot small plate, mushroom salad, a whole roasted cauliflower, and two cocktails. Amidst the “Wow’s” an “Oh my gods,” each articulated their praise dish after succulent dish. In regards to the beet salad, Steven remarked, “It almost tastes like an In-N-Out burger if In-N-Out burgers grew in the round.” “[It’s] too good to be true,” he confessed.

In regards to audience feedback, Steven said it has been “overwhelmingly positive from all communities.” The team is looking to expand its vegan features in future episodes, possibly with Ethiopian and Japanese vegan cuisines. Stay tuned.

Image Credit: Buzzfeed Worth It