Mother and daughter team Rosa and Angela Perkins faced difficulties eating out while vegan in their home state of Michigan. After years of struggling, and ultimately having to cook far more often for themselves, they decided to open their own all-vegan restaurant, Eatin’ Vegan Cafe, in Swartz Creek.

“When I became vegan, it was so difficult to find a true vegan dish other than salad unless I wanted to go all the way down to Detroit,” Rosa said to ABC12. Eating out doesn’t always have to be hard — though certainly there are some areas where options are slimmer than others. A wonderful resource for folks in this predicament is Happy Cow, which will help you find vegan places to eat. 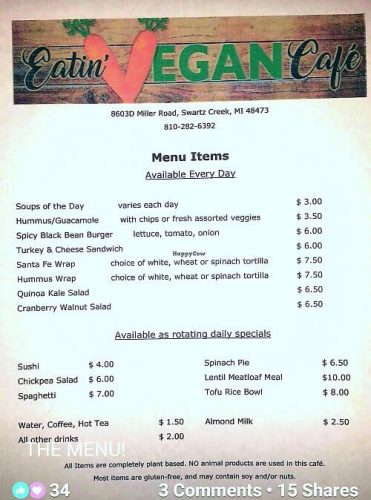 She continued, explaining what the pair’s intentions were for Eatin’ Vegan Cafe:

“It’s something that you can stop in grab on your way home. It’s what you want to eat and its what you would have made if you had the time.

“I try to fix meals that my mother would have fed me, and I was not vegan growing up, but almost any dish you remember from your childhood you can make a vegan version of.”

According to their Happy Cow entry, they serve all vegan and (mostly) gluten-free food, using as many organic ingredients as possible. All items in the store are made fresh, daily. You can see the menu here.

Vegan residents of mid-Michigan now have a cool new place to eat. Here’s to more entrepreneurs expanding veganism all over the world and giving options to folks who may not have had them before… because everyone deserves to eat out every once in a while.