Educational animal dissection is a controversial topic. Proponents defend its educational merit, while critics question the ethics, environmental impact, and overall necessity of the practice. But what is the reality of animal dissection, and is there a cruelty-free option? 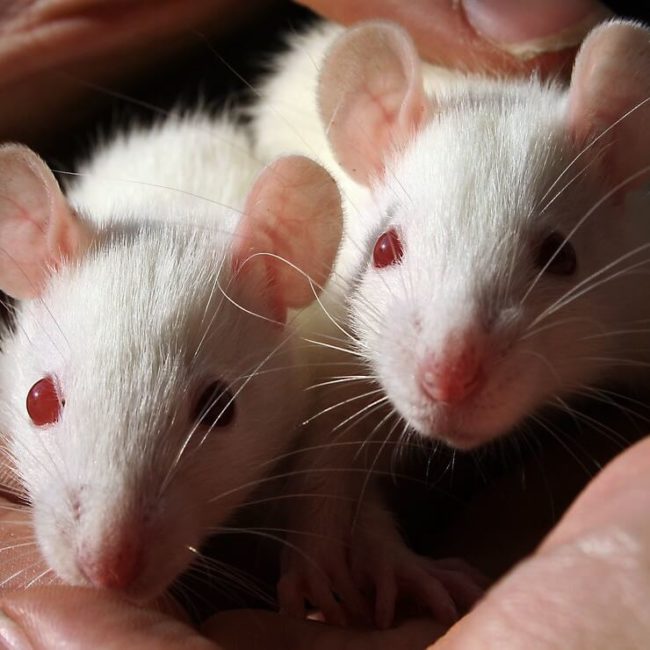 The Reality of Dissection

Dissection, in general, involves the dismembering of a deceased animal or plant to study its internal and anatomical structure. In the U.S., the educational dissection of smaller animals typically takes place during middle and high school. According to Animalearn, which provides humane education resources to educators, around six million vertebrate animals are dissected in U.S. high schools alone.

Many critics of dissection focus on ethical, animal welfare considerations—such as the number of individual animal lives lost. However, there is also a broader ecological impact caused by removing animals from their habitats. There is also the issue of human health. Animals for dissection can be preserved in chemicals such as formaldehyde, which the Environment Protection Agency classifies as a “probable human carcinogen.”

The most commonly dissected animal by middle and high school students is the frog. But other species include rats, mice, worms, cats, dogs, rabbits, fish, and fetal pigs.

While procuring these creatures in the wild can negatively impact their native habitat, most come from companies that specialize in supplying animals via breeding facilities. Some slaughterhouses, pounds, animal shelters, and pet stores sell animals to these biological supply companies. Including lost or stolen former companion animals.

Many people, both supporters and critics, emphasize the rights of students to choose or refuse to take part in dissection. However, according to the paper “Dissection and Choice in the Science Classroom” (2012), teachers do not always offer pupils this choice.

While 18 U.S. states, including California, allow the student to opt-out of dissections without penalizing them, this research suggests that even if given the choice, many students may feel too intimidated to do so. Some have reported feeling pressured and wary of social stigma. 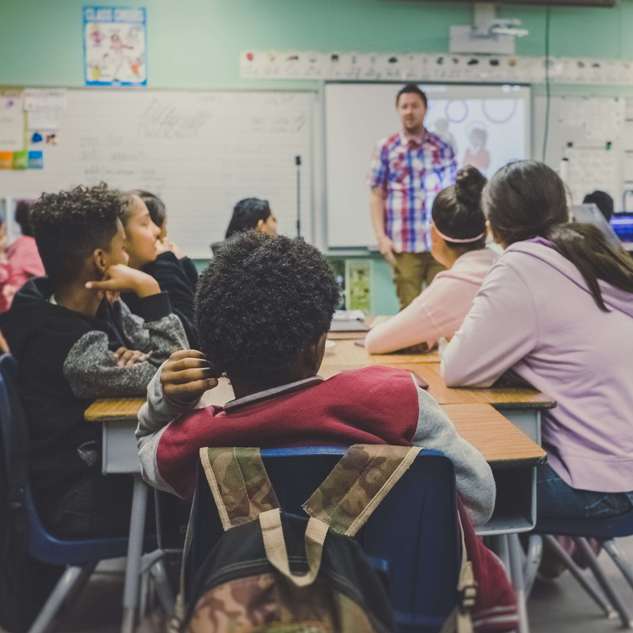 A ban on dissection is possible in California.

“Learning about anatomy in schools is important scientific pedagogy but dissection presents a significant impact on the environment and our fragile ecosystems. Advancements in educational technology have expanded access to this important scientific instructional methodology without having to rely on animals,” Kalra said in a statement.

The bill was co-sponsored by several non-profit organizations, including the Physicians Committee for Responsible Medicine (PCRM), Social Compassion in Legislation, and PETA (People for the Ethical Treatment of Animals). The National Hispanic Medical Association, the Humane Education Coalition, Center for Healthcare Education, and the United Federation of Teachers’ Humane Education Committee also support the bill.

Support for alternative teaching methods comes from a wide variety of sources, including teachers and academics. Some studies have suggested that dissecting animals can actually desensitize students to the sanctity of life, and potentially foster cruelty towards animals.

“The fact is, we do not need to put our young people through this. There is a better way, and California can and should move to the more modern and accepted use of digital dissection resources,” said Judie Mancuso, CEO of Social Compassion in Legislation. 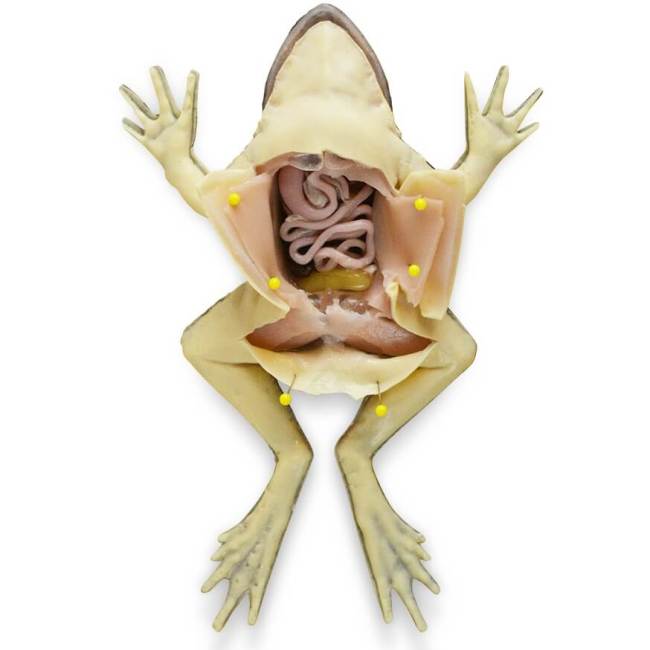 There is an increasing number of alternative teaching methods, ranging from hyper-realistic synthetic animals to software and apps. Tampa-based company SynDaver specializes in sophisticated, synthetic models for dissection. These extremely lifelike models are used for education, surgical simulation, and testing medical devices. According to SynDaver, this validated technology can effectively replace human patients, cadavers, and animals.

The company’s SynFrogs are reusable and mimic the properties of a live, female frog—the most commonly dissected animal by middle and high school students. Last year, J.W. Mitchell High School in New Port Richey, Florida, became the first in the world to use SynFrogs.

“There’s no longer any need to harm real frogs for the sake of enhancing the educational experience,” says SynDaver. “In addition to eliminating the ethical concerns of sacrificing living animals to teach comparative anatomy, SynFrog is a better option for students because it does not expose them to hazardous chemicals, like formaldehyde and formalin.”

SynFrogs cost $150 each, which is considerably more than animal-based dissection. However, synthetic alternatives are also reusable, which will save schools money long term and is far less wasteful. 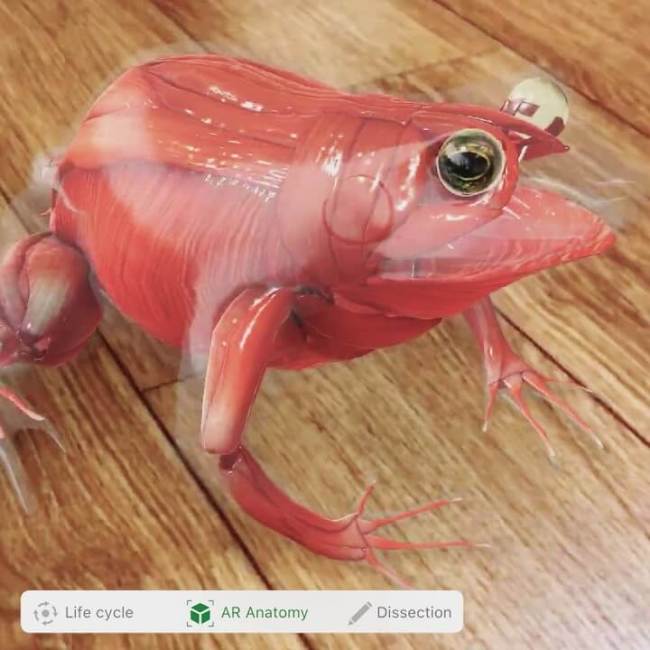 Computer technology presents another alternative for traditional educational dissection. Indian company Designmate developed Froggipedia as an ethical, realistic, 3D alternative. The app allows students to explore the life cycle and complex anatomy of the frog and has received praise from teachers and parents alike. 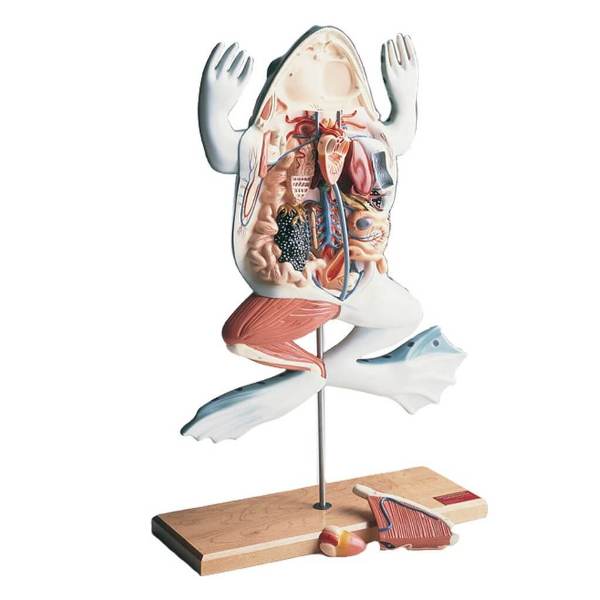 Interactive models are another alternative to educational animal dissection. Companies such as AnatomyStuff produce 3D, anatomically correct models. These models are also common when studying human biology, and mock-ups of individual body parts and systems are relatively widespread in classrooms.

Anatomy in Clay allows students to build the body systems of humans and animals out of clay on model skeletons. The company promotes “hands-on learning” as the most efficient way of reaching visual, tactile, and kinesthetic learners all at once.

Denoyer Geppert’s Great American Bullfrog is a large-scale model of the animal with individually numbered parts. The circulatory, reproductive, and other systems can be separately dissected. The company also produces models of plants and large wall charts, another alternative to live dissection.

The Biology Chart Series includes detailed charts of a dissected frog, perch, crayfish, grasshopper, and earthworm. There are also countless books on various anatomy available to students, including interactive editions. 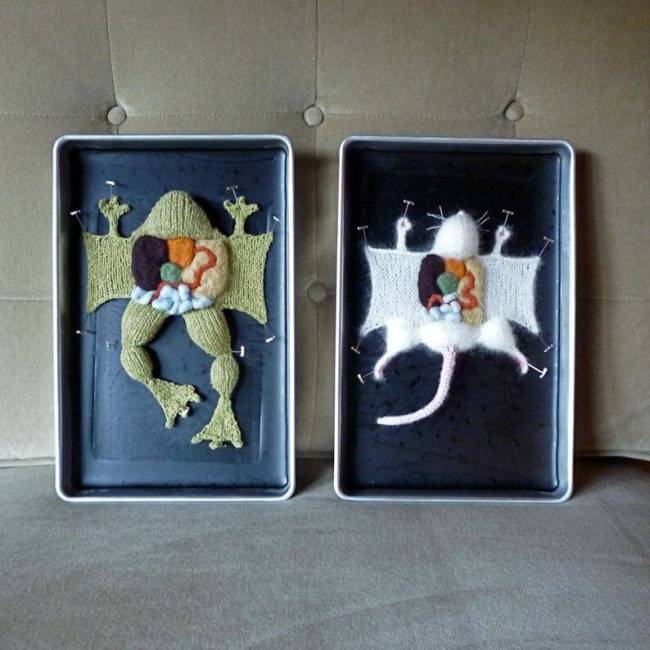 The Vermont-based company creates rats, bats, pigs, frogs, earthworms, and even humans out of textiles. The range of knitted scenes are precise, anatomically correct, and make effective educational displays and projects.

“I am beginning to move more toward two-dimensional, human-based artwork that is very strongly influenced by 19th-century anatomical illustrations. I am fascinated by the history of medicine, and I just have always loved the artwork associated with that,” continued Stoneking.

She sells finished items for display, as well as pattern kits for people to knit at home. Stoneking also sells a combined pattern collection that includes several best-selling items.