Updated August 7, 2019. Canada Goose updated the language on its website pertaining to the treatment of the geese it sources its feathers from.

The Toronto-based winterwear brand’s iconic parkas — stuffed with goose feather down and trimmed with coyote down — are at the center of many discussions about the ethics of using animals in fashion. On its website, Canada Goose removed the word “ensure” from its standards for animal abuse by its suppliers, according to international animal rights group PETA (People for the Ethical Treatment of Animals). It also removed a video on “down traceability” used to show that the geese used for their feathers aren’t abused.

Down is the soft layer of a bird’s feathers that’s used to fill comforters, jackets, and pillows. Some farms partake in live-plucking — pulling feathers off of conscious birds –, which causes pain and can leave open wounds. Many farms that sell down feathers are linked to the poultry meat industry. 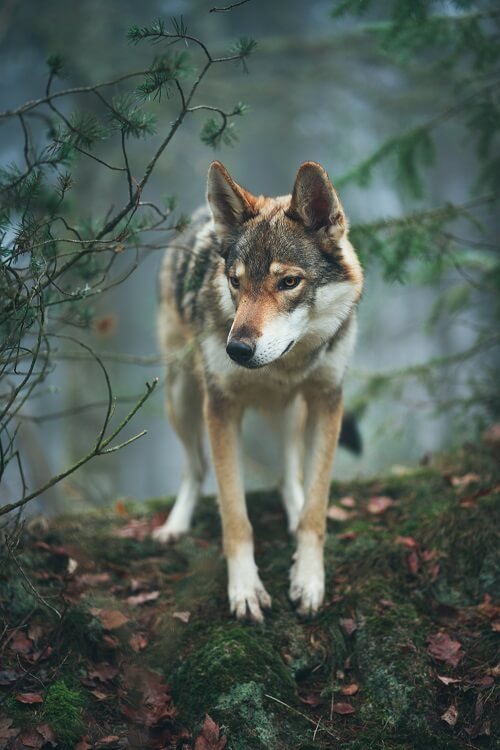 Canada Goose’s fur is the subject of controversy.

Canada Goose was investigated by the Federal Trade Commission’s (FTC) Division of Advertising Practices earlier this year, but claims that the changes to its site have nothing to do with it. “We are appalled by the gross mischaracterization of our long-standing ethical sourcing standards which have only strengthened over time and become more robust,” a spokesperson told Ad Age via email.

The move follows a 2017 exposé of the Manitoba-based James Valley Colony Farms Ltd., a down supplier, revealed workers grabbing and carrying frightened birds by the neck and forcing them into cramped cages for their five-hour trip to the slaughterhouse. There, they were shackled, hung upside down, and had their throats slit in front of other birds. James Valley Colony Farms breeds more than 130,000 geese per year, according to PETA. It sells its down to Canada Goose’s only down supplier, Toronto Feather Industries, and sells geese to South Dakota’s Schiltz Foods, the largest goose slaughterhouse in North America. The investigation prompted PETA to file its complaint with the FTC) to challenge Canada Goose’s “ethically sourced” and “humane” claims.

Following the investigation, Canada Goose claims that it no longer uses James Valley Colony Farms to obtain down. The FTC decided not to take action because, according to the Canada Goose spokesperson’s email, the agency “did not reach any conclusions regarding whether any prior statements were misleading. In fact, our website reiterates our commitment to the ethical sourcing and responsible use of all animal materials. Any inference to the contrary is false.”

Despite the conclusion of the FTC’s investigation, PETA maintains that Canada Goose’s welfare standards are “laughable at best.” 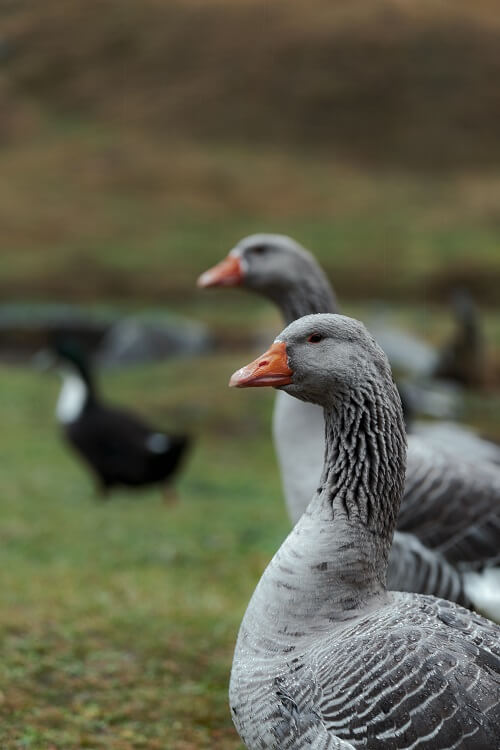 The ethics of using down feathers and fur is at the center of discussions on Canada Goose.

Founded in 1957, Canada Goose is synonymous with its aforementioned parkas featuring a fur-lined hood, which the popular winterwear brand has faced protest over.

To obtain the fur, Canada Goose traps and kills wild coyotes through a variety of painful methods, including steel leg traps, head-crushing traps, body-gripping traps, or leg snares, according to PETA. Sometimes animals can spend days suffering — but they are also killed via gunshot to the head or bludgeoning. Mother coyotes who have left the den to find food for their pups are often trapped. Their pups starve as a result. Some attempt to chew off their own legs in a desperate attempt to escape.

Coyotes are also left susceptible to death as a result of blood loss, shock, dehydration, frostbite, gangrene, and predators. Dogs, cats, and other animals may also be caught by the traps. Coyotes are skinned after they’re killed and the bodies are discarded.

Canada Goose’s popularity has set off a chain reaction, according to the Chicago Tribune. The brand became fashionable in 2013 when model Kate Upton wore a parka on the cover of Sports Illustrated. Since then, other brands have made similar coats featuring coyote fur trim around the hood. “Coyotes are hot,” said John Hughes, a longtime buyer at J and M Furs in Roundup, Montana, “and it’s all due to the trim trade.”

Mark Downey, the CEO of Fur Harvesters Auction Inc. believes that the coyote fur will continue to be a bull market, led by Canada Goose. A similar viewpoint is shared by the North American Fur Auctions. Many coyote trappers view themselves as people helping control the population of what’s considered to be a pest animal. The adaptable animals can thrive in a variety of settings from the western plains to Central Park in New York City. According to the Farmer’s Almanac, the biggest concern comes from their tendency to prey on livestock such as sheep and chickens.

While the Toronto-based brand offers coats without fur trim, the down feather filling is another ethical issue, as the exposé revealed.

A page Canada Goose’s website defends its use of fur and down. Under the section “Our Transparency Standards,” the Toronto-based brand states that it all of its fur is “in accordance with the Agreement of International Humane Trapping Standards in Canada and the Best Management Practices in the United States” and is never sourced from fur farms.

Canada Goose also claims it supports “ethical sourcing and responsible use of down used in our products.” Its down, it says, is a by-product of the poultry industry and not sourced from “live-plucked or force-fed birds.”

Many have questioned the ethics of using animals as commodities for fashion as well as food. Although Canada Goose says that it stopped using the supplier that was the subject of PETA’s 2017 investigation, poultry farms kill animals who don’t want to die. Geese on farms are kept in dark, cramped sheds with no access to running water, depriving them of natural behaviors like swimming and foraging. The birds often exhibit signs of stress such as pecking at one another or pulling out their own feathers, so cutting off their upper beaks is a common practice. 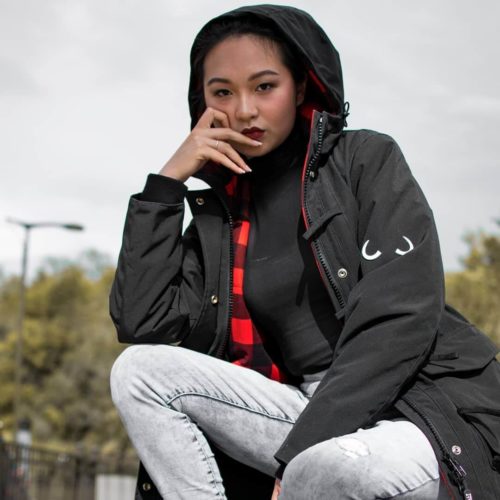 A growing number of winterwear brands have found sustainable, vegan alternatives to down feathers such as milkweed and recycled plastic.

Last year, San Francisco-based brand Everlane launched the “ReNew Puffy Puff,” a vegan winter coat featuring an outer made from 32 water bottles a filling made from recycled Primaloft insulation instead of feathers. The company aims to eliminate virgin plastic from its products by 2021. While the zippers and trim are not made from post-consumer materials, Everlane said that it is working on sustainable replacements.

“[Plastic] a really convenient thing, but it’s actually incredibly damaging because once plastic is made, we use it for a second but it lasts forever,” Everlane founder Michael Preysman said last year, acknowledging that the company’s commitment to sustainability makes only a small impact on a larger problem. Five hundred plastic bottles are produced annually and Everlane hopes to upcycle 100 million over the next five years.

Another iconic winterwear brand, The North Face, also launched a vegan “down” jacket made from sustainable materials last winter. It relaunched its popular ThermoBall line as ThermoBall Eco, featuring eco-friendly fabric made from upcycled plastic bottles. It’s also filled with Primaloft’s vegan down alternative made from at least five plastic bottles diverted from the landfill. According to The North Face, its ThermoBall line traps heat within small air pockets, mimicking down feathers. An independent study conducted by Kansas State University revealed that the warmth provided by the insulation is equivalent to 600-fill goose down.

Canada-based vegan outerwear brand Wuxly Movement makes a parka similar to Canada Goose’s iconic jacket, but without the animal products. The independent company worked to develop its materials over the course of five years in order to ensure that it outperforms down and fur. Like The North Face and Everlane, it uses Primaloft insulation.

As well as being animal-free, Wuxly Movement also uses sustainable materials, such as VeganTech Shell outers from a company based in Montreal, to further lower its carbon footprint. It also works with wildlife charities to support their rehabilitation efforts and ensures that its compassion extends to humans: fair labor practices are mandatory throughout its supply chain.

The ethics of killing animals for fur is also the center of pending legislation in New York and California. Both states have introduced legislation that would make selling fur products illegal. Several cities across the Golden State — San Francisco, Los Angeles, Berkeley, and West Hollywood — already have similar bans in place. Lawmakers introduced a bill in New York earlier this year.

Many predict that a ban in both states would set off a domino effect in the fur fashion industry.