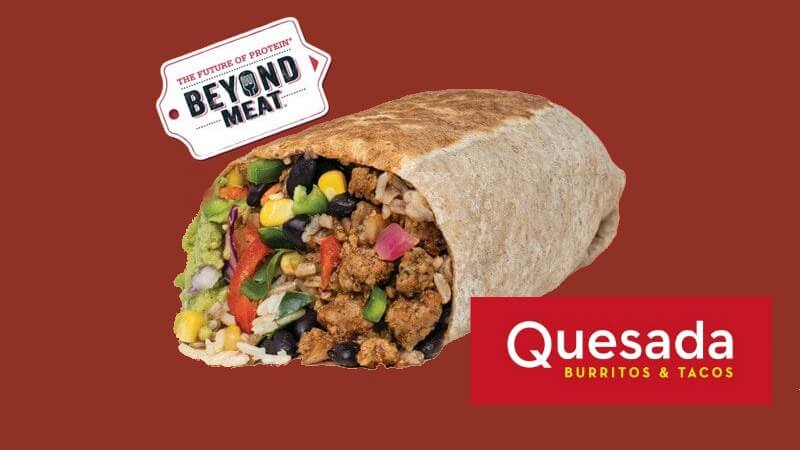 Canadians can now get their hands on vegan burritos made with Beyond Meat at Quesada Burritos & Tacos, a Mexican-inspired fast-casual chain.

The new option, packed with soy-free plant-based meaty Feisty Crumbles, will be available across the country at Quesada’s nearly 120 locations.

According to the chain, the new menu addition is in response to consumer demand for more animal-free choices. A study from last November revealed that at least 6.4 million Canadians are now actively trying to limit their meat consumption for a number of reasons, including climate change and animal welfare.

“More of our customers are identifying as flexitarians and requesting plant-based options so we’re thrilled to be Canada’s first Mexican chain to offer the Beyond Meat Burrito,” Quesada’s founder and chief recipe offer Steve Gill said in a statement.

He added, “Beyond Meat’s Feisty Crumbles perfectly replace animal protein with plant protein that’s juicy and satisfying to anyone – no matter their dietary preferences.”

The Beyond Meat crumbles — spiced with Mexican flavors and a little Habanero pepper — joins the chain’s existing vegan burrito fillings, including refried beans, roasted vegetables, and black beans. It also offers a special creamy vegan sauce, similar to mayonnaise but with a smoky flavor.

Beyond Meat is pleased with its partnership with the chain, and the creative flavor it has produced using its vegan meat.

“We pride ourselves in creating delicious, sustainable protein for the center of the plate that enables consumers to continue eating what they love, in this case satisfying tacos and burritos, while enjoying the health and environmental benefits of plant-based meat,” said Beyond Meat’s founder and CEO Ethan Brown.

“We are excited to expand our Canadian presence by partnering with Quesada — a true success story in menu and flavor innovation,” he added.

The brand recently partnered with Canadian fast-food chain A&W, making its vegan “bleeding” patty — which looks, cooks, and tastes like meat — available across the country.

The menu addition boosted the chain’s fourth-quarter sales by 10 percent, according to a report from February. Shortly after, another new A&W product was announced, a breakfast muffin with Beyond Sausage patties.