What Is the Protein Industries Canada Supercluster?

Now, Vancouver-based Burcon NutraScience Corp. has invested $65 million to build a facility within the Supercluster to produce pea protein and canola ingredients, Food Business News reports. The joint venture will see to a facility that can produce approximately 20,000 tonnes of peas per years starting in mid-2020.

Nutratein-PS, one of the products made by the company, can be used to fortify vegan milk. Another, Nutratein-TZ, may be used in plant-based burgers and sausages. 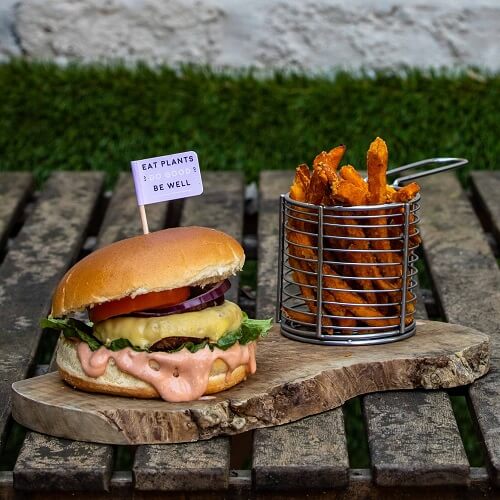 The lofty announcement follows Canada’s nearly $153 million investment in vegan protein, Protein Industries Canada, a nonprofit group of institutions involved in agriculture and food-related services and development. Carlo Dade, of the public policy think tank Canada West Foundation (CWF), explained to Financial Post, “Unlike other superclusters, this one is not aspirational. Our goal is total world domination.”

Facilitating this, the government pledged a major investment last month. The grant, which comes from the Innovation Superclusters Initiative, a $950 million federal fund intended to bolster the nation’s businesses and accelerate economic growth, enables the group to implement plans announced earlier this year.

Protein Industries Canada’s interim board of directors includes executives from companies, including AGT Food and Ingredients Inc., located across Alberta, Saskatchewan, and Manitoba.

The three prairie provinces are already among the world’s largest producers of high-protein pulses, and Dade believes that together they could command the global market for plant protein.

Saskatchewan is the nation’s top exporter of agriculture and agri-foods, exporting $13.6 billion last year; Alberta exceeded its own personal best with $11 billion in agriculture exports; and Manitoba exported $4.3 billion in ag-based products.

With the plant protein market projected by CWF to grow at 5.9 percent annually over the next five years, and plant-based proteins predicted to form a third of the global protein market by 2054, these provinces could see even greater export stats.

In a bid to facilitate this, the Saskatchewan agriculture ministry is keen to embark on a “collaborative effort,” already liaising with the other provinces to build research. In a statement, the ministry explained, “We need to share our intellectual and physical resources to be successful in this highly competitive global area.” Oneil Carlier, Alberta’s Agriculture Minister, concurred, “There’s always been collaboration on research and sharing technology.”

James Szarko, the president and CEO of Botaneco Inc., a natural ingredient manufacturer which extracts oils, proteins and fibers from canola, safflower, sunflower, and hemp, also believes that Canada “could truly dominate.”

Canada is not the only nation capitalizing on the plant-protein market. The FP notes “rising competition” from the U.S. and Europe.

According to Dade, U.S. companies already dominate the production of soybean protein, while Europe, which has less farmland for crops than Canada, has seen investment in processing centers for other forms of plant-based protein.

Szarko notes the competition but thinks Canada boasts the advantage after signing free trade deals with Europe, the U.S., and the Asia-Pacific countries through the Comprehensive and Progressive Trans-Pacific Partnership. He added, “I do think [PIS] is an incredible catalyst. The timing couldn’t be sooner.”