The brand — which has 150 locations across North America — joins major fashion retailers H&M and Asos, both of which ditched cashmere earlier this year following an investigation by animal rights organization PETA (People for the Ethical Treatment of Animals).

Derived from goats, cashmere is a soft wool, long associated with luxury. It’s warm, it’s expensive, and it’s also cruel, according to PETA.

The organization visited goat farms and slaughterhouses across China and Mongolia, which are responsible for 90 percent of the world’s cashmere.

PETA found that, in many locations, goats were mistreated. Workers held down crying animals, bent them into unnatural positions, and bound them with ropes while they tore their hair out with sharp metal combs. 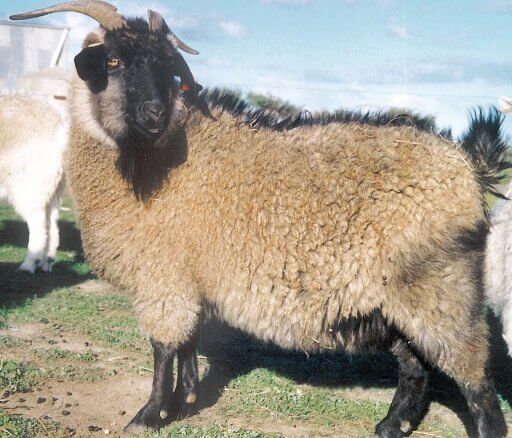 Cashmere goats are abused for their wool, says PETA | image/Wikipedia

“Gentle goats’ hair is torn out and the animals are hit with hammers and hacked to death, all for cashmere sweaters and scarves,” said Anne Brainard, PETA’s senior director of corporate affairs, in a statement.

Cashmere isn’t just tough on the animals, it’s tough on the planet, too. According to PETA, it has the most destructive environmental impact of any animal-based material, causing major soil degradation and desertification. Ninety percent of Mongolia is now at risk of desertification, causing some of the worst dust storms in history.

PETA praised Le Château for doing the “right thing” by ditching cashmere, sending the brand a box of vegan chocolates to express its gratitude. “PETA is urging all other retailers to follow its compassionate, business-savvy lead and go cashmere-free,” Brainard added.

Brands Shift Away From Animal Materials

More and more designers and retailers are moving away from animal-based materials. A number of major brands have now ditched fur, angora wool, and exotic skins, as consumers seek out more ethical fashion options.

Even major fashion icons have ditched some animal-based materials from their wardrobe. In May, reality TV star Kim Kardashian-West revealed she’d no longer wear her fur coats after having them remade in faux versions.

But there is still further to go. Vegan designer Stella McCartney is hoping that more brands will begin to move away from leather, which is still commonly used to make belts, shoes, and bags across the industry.

In a message to designers via Vogue earlier this year, she said, “if you really mean it, stop using leather full stop, and then you’ll see a massive, massive change in the industry’s environmental impact.”

The Ultimate At-Home Spa Gift Guide (For You)