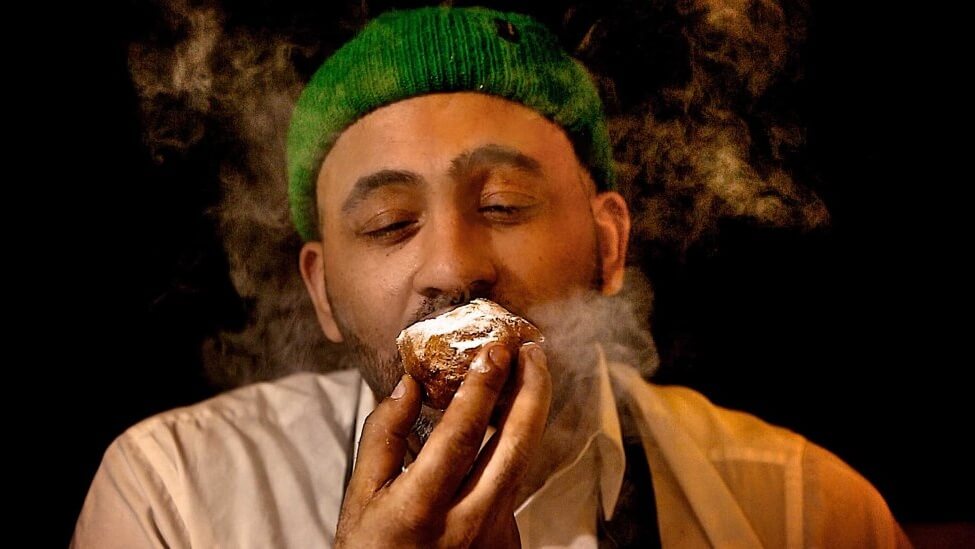 Once considered a gateway to drug abuse, recreational and medicinal cannabis use is becoming increasingly accepted by the U.S. public as more states move to legalize it. With a more mainstream acceptance comes a shift in how pot is handled in popular culture, leading now to the rise of cannabis cooking shows.

Rolling Stone reports that Viceland’s “Bong Appétit” is by far the most successful of the new subgenre of show. The first two seasons of the series feature host Abdullah Saeed, who throws elaborate, multi-course cananbis-infused dinner parties prepared by chefs. While the show itself is not vegan, the May 2017 episode “Cruelty-Free Cannabis Cuisine” featured plant-based chef and cookbook author Bryant Terry, who cooked a THC-infused meatless meal.

The show takes an educational approach to cooking with weed, such as the science behind infusing fats and oils. During the show, the chefs also have to be able to hold their own despite eating edibles, known for being deceptively powerful, even for regular consumers.

The critically-acclaimed show won the prestigious James Beard Award for Television Program, In Studio or Fixed Location, last year. It also led to the release of the cookbook “Bong Appétit: Mastering the Art of Cooking with Weed,” which features recipes as well as a comprehensive guide to the ins-and-outs of “high”-end cooking, last October.

Following the success of “Bong Appétit,” Netflix launched its own elevated cooking series this summer called “Cooking on High,” which takes a classic competition show approach. Two chefs are pitted against each other in a battle-of-the-best-edibles. The series has not received the same praise as Viceland’s “Bong Appétit,” but the subgenre is still relatively new.

So far, there has been one vegan cannabis cooking show: last year’s award-winning “High Cuisine,” which was featured on Verizon’s go90 network. Filmed at LA’s Pollution Studios, the 12-episode series pitted high chefs against one another in a cooking competition. The show was co-hosted by studio CEO and Switch4Good co-founder, Asher Brown, and “Last Comedian Standing” winner Josh Blue.

California-based cannabis lifestyle media brand PRØHBTD created “Pot Pie,” a series hosted by Brandin LaShea where participants smoke, then try their best not to get too distracted while cooking. Last September, the company announced “High Cuisine,” a 10-episode travel docuseries that have no relation to the Pollution Studio show. The series was created in a joint effort with production and distribution company Rooftop Films and the Amsterdam-based Totem Media.

The new “High Cuisine” follows chefs Noah Tucker and Anthony Joseph as they travel the world, partaking in mind-altering herbs and plants in locations including Amsterdam, South Africa, and Indonesia.

“High Cuisine puts a press on what is taboo and what is the line between what is comfortable, like food, and what maybe isn’t comfortable, like the drugs different cultures experiment with. People have always been interested in food and drugs, but no one has ever really put them together in the way that we’re doing it,” said Tucker in a statement.

With legalization being a tricky area, weed cooking shows have yet to be embraced by a larger network, but platforms like Viceland, Netflix, and PRØHBTD are willing to take the chance. While the shows have silly moments fueled by bud, the increased presence of weed-centered media is helping to normalize cannabis consumption.

While not legal on a federal level, more states are moving to make both recreational and medicinal cannabis lawful. Michiganders voted to legalize it earlier this month and will have access to recreational pot on December 6. Many speculate that New York, New Jersey, and Connecticut will be the next to pass legislation.