Canter’s Deli sources its vegan meat from Mrs. Goldfarb’s Unreal Deli, which specialises in 100 percent plant-based cold cuts for traditional deli-style sandwiches. The Canter’s Deli veggie Reuben, which is served on rye with mustard and sauerkraut, can be made vegan by omitting the cheese and Russian dressing. 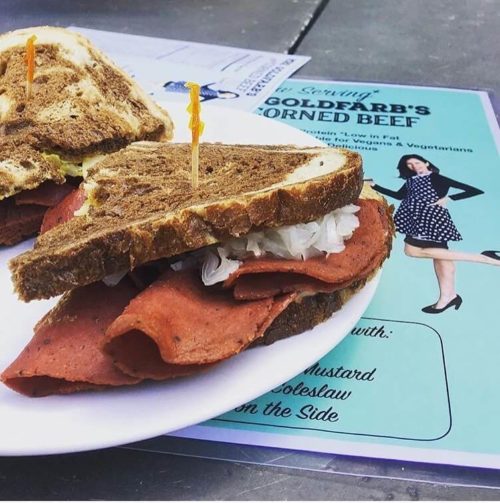 Canter’s Deli has been in business since 1931, first opening in Boyle Heights but primarily working Fairfax where it is today. The deli is open 24 hours a day except on Jewish holidays, Rosh Hashanah and Yom Kippur.

Both Canter’s Deli and Mrs.Goldfarb’s Unreal Deli emphasise the tradition of making deli sandwiches, the former in LA and the latter in NYC, and cite authenticity as a cornerstone of their respective businesses.

“Whether it’s the freshly-baked bread, or the famous house-made pickles, Canter’s always goes the extra mile to provide the authentic, traditional Jewish deli experience,” it says on the Canter’s Deli website. “Which helped grow the restaurant from a small storefront to the massive operation that it is today.”

“People from all around agree it tastes as good, if not even better than the real thing,”  It says on the Mrs Goldfarb’s Unreal Deli website. “And most people who eat it, without being told, can’t even tell the difference!”

As the demand for plant-based alternatives increases and vegan alternatives become more meat-like, many mainstream restaurants are adding new options to the menu. From independent and traditionally meat-focused outlets such as Canter’s Deli, to large chains such as Hardees, McDonald’s, Burger King and KFC, more and more companies are utilising available plant-based foods to better serve customers.