You can now get the vegan Beyond Burger at Carl’s Jr. Canada.

All 21 locations of the fast-food chain’s Canadian branch launched the Beyond Famous Star on Wednesday following its success on U.S. menus. The meat-free burger features a char-broiled Beyond Burger patty topped with American cheese, mayonnaise, special sauce, lettuce, tomato, and dill pickles on a sesame seed bun. Order without cheese or mayo to make it vegan.

“After the wild success of the Beyond Famous Star in our U.S. Carl’s Jr. locations and hearing consumer feedback and demand for a plant-based option at our Canada locations, we knew it was the perfect time to add the Beyond Famous Star to our menu internationally,” Mike Woida, President of International, CKE Restaurants, parent company to Carl’s Jr. and Hardee’s, said in a press release. 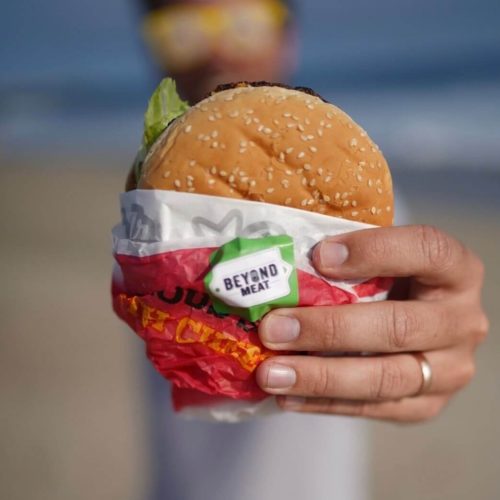 The success of the Beyond Famous Star in the U.S. led to its Canadian launch. | Carl’s Jr.

Carl’s Jr. launched the Beyond Famous Star in the U.S. last January, marking the biggest restaurant chain launch for Beyond Meat. The fast-food chain operates more than 1,100 restaurants in the U.S. “I have long looked forward to the day when my kids can go to a major fast-food chain and order The Beyond Burger. I am grateful to say that that day has arrived,” Beyond Meat founder and CEO Ethan Brown said at the time.

The meat-free burger brought new customers to Carl’s Jr. — and it was even featured in a Super Bowl ad and promoted by Snoop Dogg at this year’s Grammy’s party.

“We’ve learned that we’re reaching a brand new guest, an incremental guest, that we hadn’t touched prior to launching it,” Owen Klein, VP of Global Culinary Innovation at CKE, said to Bloomberg. “Since late 2018 when we launched, we’ve sold over 4 million Beyond patties at Carl’s Jr., and a lot of them were to new faces that didn’t frequent Carl’s Jr. prior to that launch.”

Earlier this month, Hardee’s announced that it would trial the Beyond Burger and Sausage this fall. The meat-heavy restaurant chain has 1,841 locations in the U.S.

The vegan-friendly Beyond Famous Star is available at all 21 Canadian Carl’s Jr. locations starting today.