Amahle Ntshinga is a true changemaker. The 27-year-old South African woman has developed an e-commerce platform to help boost her country’s economy. LUNTU, which launched in August, enables consumers to use their purchasing power for good by giving them an easy way to shop for products that align with their values.

The online marketplace brings together a number of companies that sell everything from coffee to apparel and beauty and self-care products. To make shopping for mission-driven products easy, LUNTU uses a scoring system to highlight the social cause that the business benefits.

The LUNTU index classifies products into a number of categories, including cruelty-free, vegan, womxn-owned, Black-owned, eco-friendly, and fair trade—just to name a few.

Ntshinga told LIVEKINDLY she hopes this type of transparency will encourage more businesses to be more sustainable. “LUNTU is also about the environment. We’re not going to get any type of real change in the commercial space unless we stop supporting companies that aren’t doing anything to progress society,” Ntshinga says.

“Once people decide to use their purchasing power, then all these other corporations that are not doing what’s good for society—I think it will entice them to change,” she continues.

Bloomberg’s Misery Index ranks some of the world’s economies based on unemployment and inflation rates. According to the index, South Africa has the third-most miserable economy in the world after Venezuela and Argentina.

South Africa’s unemployment rate came in at 30 percent—the highest it’s been in ten years. And the coronavirus pandemic is making things much worse. Earlier this year, the National Treasury predicted the country’s unemployment rate could surge to 50 percent, with more than seven million people out of jobs due to the outbreak. But South Africa’s economy has struggled even prior to the pandemic.

“Most of our industries are so monopolized. We don’t really have much of a startup culture. Most of our small businesses don’t turn in to medium-sized businesses—either they stay small or they shut down,” Ntshinga explains.

According to the research networking site Research Gate, the failure rate for new business start-ups in South Africa is incredibly high. This is namely due to the inaccessibility to debt finance from commercial banks.

@luntu.co is proud to announce that we will be presenting at the ICT SMME Chamber Women’s Day Showcase. Celebrating womxn in ICT. Swipe left for details. #ictsmmechamber #shopluntu #womeninbusiness #womenintech

Ntshinga conceived the idea for LUNTU nearly four years ago while she was a student in business school. Although she was very supportive of women empowerment and the Black Lives Matter movement, she said she didn’t find herself consciously supporting women- and Black-owned businesses.

“I realized the reason I didn’t do it is because I can’t find them easy enough. And it’s just inconvenient to support the businesses that I want to support,” she explains. “When I realized there was a gap in the market, I came up with the idea.”

“There’s more of a drive to be conscious in general. And I feel like the timing of launching LUNTU is perfect because it’s almost like divine timing,” she explains.

Ntshinga says LUNTU’s ideal customer is someone who is aware of how necessary social change is in the world. “It’s for someone who values quality. But also somebody who is conscious and understands the importance of one dollar and how important your dollar is.”

And, so far, she says the customer reception to LUNTU has been positive. “A lot of people are happy because it is a conscious shopping platform that’s actually owned by someone who is part of the demographic.”

Through her online marketplace, Ntshinga is able to give South African-based businesses opportunities that they might not otherwise have. Some of the vendors featured on her site include South African-owned companies like T-Shirts for Change and Sunburst Creations. The latter makes African-style pillow covers.

She says: “All the vendors signing up, they’re so happy. And every time I pay them their part of the money, I always feel excited. Because these are sales they might not have had without LUNTU.”

“Small vendors have a wider customer base with LUNTU, so they could increase their sales and hopefully increase their job opportunities and try and get some economy running in South Africa,” she continues.

And Ntshinga says, above all, LUNTU—a Xhosa word that means community and society—is all about building together.

“In our culture in South Africa, we have something called “ubuntu,” which is all about the community. You’re not going to be a savior and help everyone at the expense of yourself,” she continues. “You know we all build the table so we can eat together. We all cook the food together and we eat together.”

Overall, Ntshinga’s goal is for LUNTU to generate significant revenue streams for her employees and the site’s featured vendors. She hopes this will help foster economic growth for South Africa.

“LUNTU is not an NGO. It is without a doubt a for-profit organization. I definitely am trying to get money. I’m also trying to live the life I want to be living. But I don’t want to do it at the expense of other people or the expense of the planet. And I truly believe that all of us can live the lifestyle we want to live together,” she says.

In the next five years, she wants LUNTU to be the number one mission-driven e-commerce retailer in South Africa. This way, she can widen her impact.

“The nice thing about LUNTU is that it’s an ecosystem. So if we have a thousand vendors on the platform, that’s a thousand vendors that are getting money that they didn’t have before. I think about many South African lives we are impacting that way and it makes me very excited,” she adds. 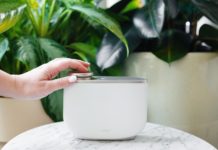 Curb Anxiety and Stress With This Cruelty-Free Essential Oil Diffuser