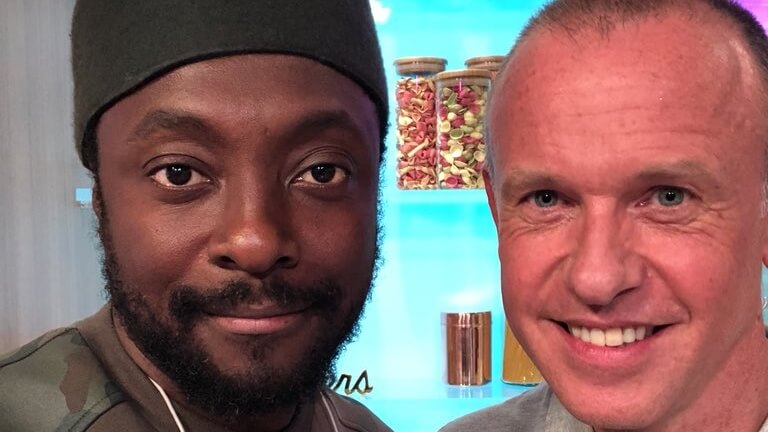 Vegan musician Will.i.am has appeared on Channel 4 cooking programme “Sunday Brunch,” with hosts Tim Lovejoy and Simon Rimmer. Tweeting of his appearance before his segment went live, the rapper wrote “I’m up next… I’m making something fab!!!” To which Sunday Brunch replied, “It really is! #VEGANG.”

On the programme, the Black Eyed Peas frontman helped to make vegan chocolate, coconut, and date bars and discussed his initial reasons for going vegan. “I had high blood pressure, and my cholesterol went up. And my doctor was like ‘here’ and gave me these pills,” he explained. “ I was like why can’t I just change my eating regiment? Why do you want to give me medicine? Some drug? To fix something that I could just fix by working out and eating right?”

“Let me tell you, I went vegan, plant-based, and my cholesterol and blood pressure came down in like 2 weeks,” he said. “I lost like 15 pounds. I have pectorals now” he revealed. “I got abs.”

In between cooking, the musician also discussed his creation of the #vegang and his feelings about corruption in the meat industry. “There’s this relentless industry that wants to give you food that’s not healthy for you,” Will.i.am told Lovejoy and Rimmer. He also put to bed any questions about protein during his appearance, “people are like, ‘oh I need protein,’ [but] when’s the last time you heard an elephant talk about protein? They’re super strong, yo.”

This is not the first time Will.i.am has spoken out about his plant-based lifestyle, the rapper frequently discusses his dietary choices in interviews and on social media. Whilst he initially went vegan for his health, “The Voice” judge has also posted on Instagram about the ethics of killing animals for food. He asked himself, “If we didn’t have these fancy utensils, would I have the ability to go up to a living creature and like, savagely kill it to eat it? Could I do that? It wasn’t ‘I love animals,’ ‘let’s save the planet’…at first.”

For those who want to try out Will.i.am’s vegan lifestyle, the recipe for his plant-based chocolate and coconut bars is available from the Channel 4 website.