Are you having trouble giving up cheese? Well, you just may be addicted to it.

A 2015 study published in the U.S. National Library of Medicine found certain foods are actually more addictive than others. It also revealed that these foods “may share characteristics with drugs of abuse.”

Pizza topped the study’s list of addictive foods because of one particular ingredient: cheese. But why is cheese so addictive? And is it bad for you?

Why Is Cheese Addictive?

The melty, stretchy consistency and savory flavor of a cheese pizza can make it difficult to say no to that extra slice of pie. But the culprit behind your insatiable cheese cravings isn’t just the look and taste of cheese.

Casein—a protein in cow’s milk that gives it its white coloring—is to blame. When the body digests casein, the milk protein turns into casomorphins—which are smaller, morphine-like compounds.

“These opiates attach to the same brain receptors that heroin and morphine attach to,” Dr. Neal Barnard told Forbes. Barnard is the founding president of the Physicians Committee for Responsible Medicine (PCRM)—a non-profit organization that promotes a plant-based diet and preventative medicine. He is also the author of “The Cheese Trap,” which explores cheese addiction and its impact on human health.

But unlike heroin and morphine, of course, the opiates found in cheese aren’t illegal. “[These opiates] are not strong enough to get you arrested, but they are just strong enough to keep you coming back for more,” Barnard added.

Casomorphins, which are also naturally found in human breast milk, entice baby cows to keep feeding. Although the levels of casomorphins are relatively low in unprocessed cow’s milk, the addictive qualities of these mild opiates become magnified when producers ferment cow’s milk to make cheese. 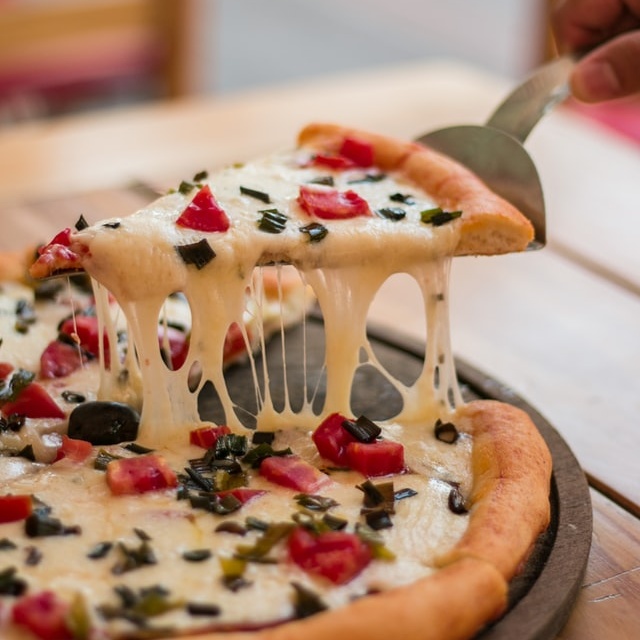 Is Cheese Bad for You?

One cup of cow’s milk contains approximately six grams of casein protein. However, when producers turn the milk into cheese, this number grows to more than 40 grams per cup.

The morphine-like compounds derived from casein can also cross the blood-brain barrier and trigger a dopamine release. Dopamine is a feel-good hormone that elicits feelings of enjoyment, reward, and pleasure.

The high-fat content of cheese can also increase its addictive qualities. Susan Levin, MS, RD, CSSD, director of nutrition education for the PCRM, told LIVEKINDLY that cheese products are the top source of artery-clogging saturated fat in the American diet.

“It’s the type of “bad” fat responsible for raising blood pressure and cholesterol levels and increasing the risk for heart disease, certain types of cancer, and Alzheimer’s disease,” she explained.

She said cheese has also been linked to other health concerns. These include asthma, allergies, digestion problems, and more. “Typical cheeses are also packed with calories—70 percent which come from fat. It’s a recipe for health problems and weight gain,” she added.

The Health Impacts of Consuming of Cheese

Earlier this year, PCRM and its 12,000 members urged the U.S. Department of Agriculture to remove dairy from its MyPlate dietary guidelines. PCRM wants the FDA to make it mandatory for producers to place warning labels on cheese products, similar to those found on cigarette packs, in order to warn consumers of the potential health risks of cheese.

During an interview, Dr. Barnard revealed the consumption of cheese can also impact male fertility. “Men who consume the most cheese have the worst sperm counts, the worst sperm motility, the worst sperm morphology, meaning the shape and the movement and just the absolute number of sperm is less the more cheese you eat,” he said.

Due to all of these health implications, Dr. T. Colin Campbell—a world-renowned biochemist and plant-based nutritional scientist—says casein is one the “most relevant chemical carcinogens ever identified.”

Campbell specializes in studying nutrition’s longterm impacts. Together with his son, Thomas, he conducted a study to find out how animal-based and plant-based proteins impact people’s health. Their findings were published in Campbell’s 2005 book, “The China Study.”

The eye-opening study exposed a correlation between the consumption of animal-derived proteins and certain diseases like cancer.

“If we use the criteria that is used for determining what’s a carcinogen, casein is the most relevant chemical carcinogen ever identified. Make no mistake about it,” Campbell said during an interview. 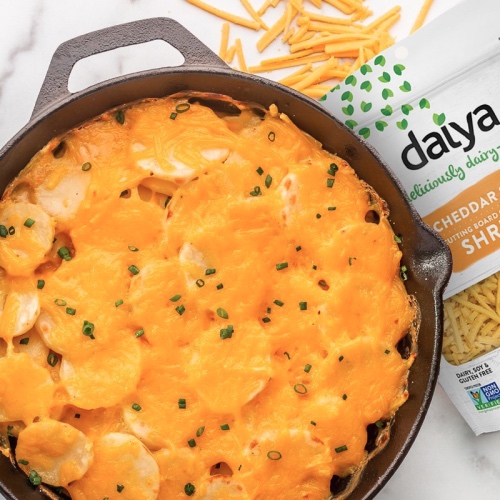 “By removing cheese from your diet and replacing it with healthful, plant-based options, you will not only lower your risk for heart disease, but also lower the risk for certain types of cancer, Alzheimer’s disease, weight gain, and other health problems,” she explained.

Whether you’re looking for shredded cheese to sprinkle atop tacos or slices to make the perfect grilled cheese, there is a wide variety of dairy-free cheese brands on the market. There are countless vegan brands churning out non-dairy cheese that looks, cooks, and tastes just like its dairy-derived counterparts. For a list of more than 80 types of vegan cheese available at Whole Foods Market, click here.

The plant-based brand Follow Your Heart is sure to satisfy all of your cheese cravings. It carries a number of cheese options. These include cheese shreds, blocks, and slices in flavors like cheddar, mozzarella, smoked gouda, and provolone.

You can fill up your vegan charcuterie board with Miyoko’s Creamery. The brand carries artisanal cheese options like a cheese wheel in flavors like garlic herb and double cream chive cheese.

Popular vegan brand Daiya also carries cheese in shred, block, and slice options. And with flavors like jalapeño, pepper jack, and cheddar—you certainly won’t miss out on the delicious, creamy taste of cheese.

For those looking to make their own non-dairy cheese, there are countless vegan cheese recipes to get you started. Nachos lovers can whip up this potato- and carrot-based, creamy cheese dip. Or, try making this smoky red pepper cheddar cheese. The dairy-free cheese block is sliceable—perfect for placing atop crackers, grated on pizza, or layered inside a sandwiched.