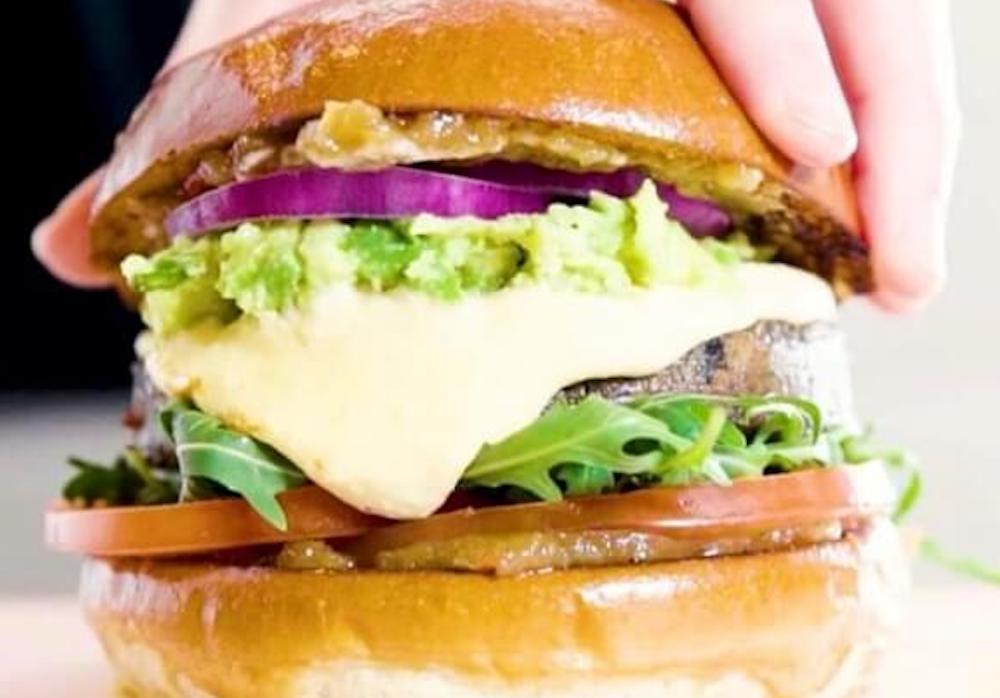 Eat Drink Vegan, Los Angeles’ premiere vegan food and beverage festival, is known for its vendor collaborations and tantalizing menu mashups. This year, celebrity chef and restauranteur Chloe Coscarelli has partnered with London-based The Vurger Co. to create a vegan cheeseburger that is shaping up to be one of the most highly anticipated foods of the festival.

Chloe’s Truffle CheeseVurger features a savory mushroom patty topped with arugula, red onions, tomatoes, smashed avocado, caramelized onion jam, and melty truffle cheese all sandwiched between two vegan brioche buns. The burger is a festival exclusive, but given The Vurger Co.’s high regard for Coscarelli, they may want to consider adding it to their permanent menu.

In an Instagram post today announcing the delicious collaboration, The Vurger Co . wrote, “Huge News Alert! We are so proud, honoured and so hyped to be able to share the biggest news with you all! It’s no secret that we have been the biggest fans from day one and this is, to put it simply, a real dream come true! We have collaborated with the seriously talented Chloe Coscarelli to create a collaboration burger of dreams…. introducing Chloe’s Truffle CheeseVurger…This is insane!”

?GET READY TO HAVE YOUR MINDS BLOWN! ?As if we already weren’t stoked on @thevurgerco making the #VeganRoadTrip ✈️?? on 5/26, they just announced the collab of your burger dreams! ?? ?Introducing Chloe’s Truffle CheeseVurger, a truffle shroom patty with caramelized onion jam and oozing with truffle cheese and smashed avo. ????? ⠀⠀⠀⠀⠀⠀⠀⠀⠀ Wayment, “Chloe’s CheeseVurger,” as in @chefchloe Chloe Coscarelli??! YES YOU READ THAT RIGHT! ??She teamed up with @thevurgerco for a debut collab EXCLUSIVELY for our festival! Put this on your foodie bucket list ? next Saturday because this is going to be INSANE! ⠀⠀⠀⠀⠀⠀⠀⠀⠀ We can’t believe you’re still here reading this – click that link in bio for tix! ☝️☝️ ⠀⠀⠀⠀⠀⠀⠀⠀⠀ #EatDrinkVegan #VeganBeerFest #LABeer #eeeeats #SeedFWLA #LAFoodBowl #WeAreShooketh ⠀⠀⠀⠀⠀⠀⠀⠀⠀ ?@thevurgerco

The company continued to praise the chef, “Chloe, quite literally, paved the way for veganism taking a mainstream path globally … Chloe’s talent is limitless, her genuine heartfelt and gracious attitude to life is just infectious and we are beyond excited for this opportunity!”

Coscarelli has not yet made an announcement on her page, but she has offered her full support to this company, which values align with her own. In an interview earlier this year, Coscarelli told LIVEKINDLY that she focuses her cooking around abundance and fresh produce, which is what inspired her current cafe in Miami, Chef Chloe and the Vegan Cafe. The Vurger Co. is also committed to providing delicious and familiar dishes made with healthy, plant-based ingredients.

The Vurger Co. also announced that Coscarelli will attend the event and help serve the burgers between 2 – 3 pm. Coscarelli said, “It is so wonderful to feed people in person. [You] get to see their reactions. For me, that’s the most rewarding part.” She will also be signing copies of her new cookbook, Chloe Flavor, between flipping burgers.

Eat Drink Vegan will be held at the Rose Bowl in Pasadena on Saturday, May 26. For tickets and more information, including the food and beverage vendor lineup, visit the event’s website.