Chef Kim Hartley, from wrap company Mission Deli, has been awarded the prestigious title of “Sandwich Designer of the Year” at The British Sandwich Industry Awards for her vegan lamb sandwich creation.

Presented by the British Sandwich & Food To Go Association, the award-winning vegan sandwich won the judges over with its plant-based lamb-style meat and beetroot hummus. In addition to Hartley crowned the overall Sandwich Designer of the Year, the sandwich also topped the hummus category at the sandwich awards.

The sandwich was comprised of an amaranth seed gözleme — a baked Turkish flatbread with yoghurt — alongside vegan lamb made using rehydrated soya protein, pea fibre, and assorted herbs and spices. Beetroot and rosemary hummus, vegan feta, baby spinach, and minted fresh peas were topped off with a baklava crumble made with cinnamon, orange, and pistachio. 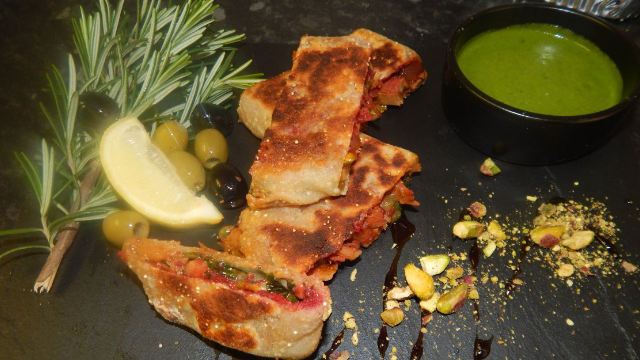 A vegan sandwich beating other animal product-inclusive sandwiches in a national competition is no small feat. Plant-based foods have come leaps and bounds in terms of how vegan ingredients can be used to recreate modern versions of traditional foods, particularly meat, dairy, and eggs.

The vegan lifestyle is popular among many consumers across the globe, especially the U.K., where data has revealed the number of vegans exceeds three-and-a-half million, or seven percent of the population. An additional 1.14 million people in Britain are vegetarian. These record figures indicate that veganism has seen a 700 percent growth in just two years.

For many, this growth stems from an awareness of the positive environmental, health, and animal welfare issues related to meat consumption. Holland & Barrett, the UK’s largest health food retailer, recently announced plans to further solidify its position in the plant-based food space by opening a fully vegan store.

Further, during  National Vegetarian Week (14-20 May), the gourmet doughnut micro-chain Doughnut-Time launched a vegan doughnut. The sweet treat is complete with Baileys Almande liqueur. With a push from celebrity chefs Jamie Oliver and Hugh Fearnley-Whittingstall in a new fundraising initiative, Veg Power, a health-conscious collective of people aim to increase the UK’s vegetable consumption by making vegetarian and vegan foods more accessible to all.