In a Tweet yesterday, former U.S. soldier Chelsea Manning announced that she’s learning how to cook “vegetarian/vegan meals” in what appeared to be a 2018 New Year’s Resolution.

Manning is best known for being convicted in 2013 for leaking more than 750,000 classified and sensitive documents to Wikileaks in 2010 about U.S. military operations. The documents became known as the “Iraq War Logs“ and “Afghan War Diary” — and the leaks led to Manning serving a total of seven years of a 35-year prison sentence.

While the leaks proved to have no significant impact on U.S. defense efforts, public opinion of Manning has since been strongly divided; many see her as a military criminal of the worst kind — being found guilty of espionage — while other saw her as a renegade invested in a more transparent government. 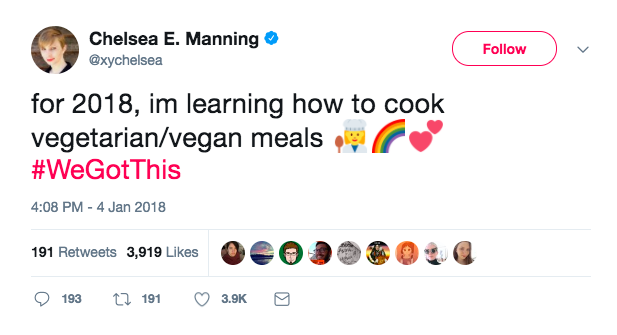 In recent years, though, Manning has become best known as a voice for the trans community, transitioning from Bradley Manning to Chelsea while in prison.

And while Manning is experimenting with some vegan meals, she says she’s not made a full transition to a plant-based diet — yet.

“I’m not committing myself to a diet, just integrating more veg food in my life,” she responded to a comment on Twitter. But if Manning still holds a commitment to lifting the veil, she’s sure to discover the truth about the livestock industry — it’s impact on human health, the environment, and the animals.

President Obama commuted Manning’s sentence before leaving office last January. She was released from prison in May, 2017.