The chicken egg industry is in decline, such that The New Food Economy (NFE) has denounced, “the industrial egg is starting to crack.” Credit goes in large part to animal welfare reform and the rise of vegan eggs.

Retail knowledge is not required to understand that products sell best when backed by public opinion – and eggs lack the support they once had. As the NFE puts it, “The industrial egg is an unloved, $8 billion utility ingredient with a serious PR problem.”

Historically viewed as invaluable for their binding, frothing, emulsifying, and scrambling abilities, and dubbed “ethical” by many consumers, the egg was a staple buy.

Over the last decade though, a series of scandals spotlighted the egg to be neither the sanitary breakfast nor the cost-effective product consumers and producers believed. A 2010 salmonella outbreak made tens of thousands of consumers ill; when the industry was forced to spend more on sanitation, production costs rose. The 2015 Avian flu led to the slaughter of tens of millions of hens, and cost U.S. taxpayers alone $950 million.

From an efficiency perspective, eggs were called into question. To produce a dozen eggs ready for market, four pounds of feed, 636 gallons of water, and a “discomforting amount” of antibiotics are required.

To lower costs, the majority of the 320 million layer hens in the U.S. live out their lives in battery cages, “stacked five high in vast, fluorescent-lit warehouses.” Freshly hatched male chicks are slaughtered, usually thrown into a grinder or gassed in crates, because they are not commercially profitable. 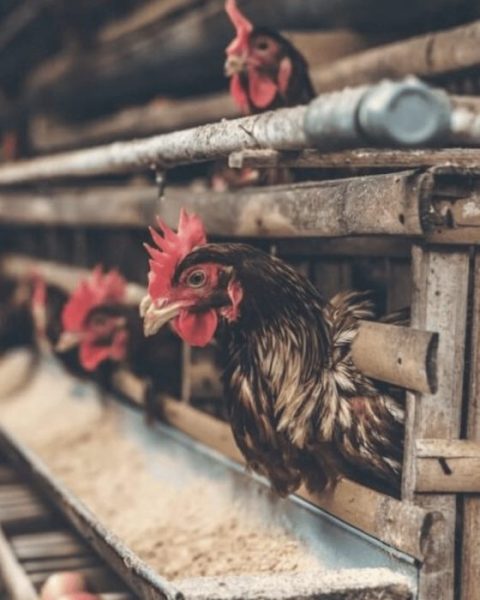 Increasing public awareness of these conditions, compounded by the rising price of the egg and questionable health implications, lay the foundation for Proposition 12, a major example of a public move away from caged eggs.

On November 6th, Prop 12 was passed despite major opposition from the egg industry. The occasion was dubbed by NFE as “the day California voters drove a stake through the heart of the caged-hen industry.”

The legislation necessitates a minimum of one square foot of cage-free floor space, access to scratching posts, nests, and perches for all egg-laying hens in California; by 2021 all eggs must be sold from cage-free facilities.

Josh Balk, the Humane Society’s vice president of Farm Animal Protection, who was heavily involved in Prop 12, said the legislation “is the most far-reaching law for farm animals in the history of the world.”

While Prop 12 applies only to products sold in California (including those produced out of state), because the state is the nation’s largest market, its standards become “de facto national benchmarks.” Both Balk and the United States Department of Agriculture predict that cage-free eggs will make up 75 percent of the industry within eight years.

However, producing cage-free eggs is more costly (91 cents per dozen compared to 67 cents for caged-hen eggs), and president of United Egg Producers Chag Gregory forecasts that moving 200 million caged birds to cage-free will cost $8 billion. “It’s an incredibly expensive endeavour,” he laments. “If consumers want this, they’re going to have to pay for it.” Or find an alternative.

California-based food tech company JUST is relegating chicken eggs to the periphery with its mung-bean based egg product, which is said to taste and scramble like the real thing. Since launching in chains across the Midwest and Southern California, the plant-based egg is proving popular, completely outselling liquid whole eggs in its first week of launch at one major retailer. The company also manufactures egg-free mayo and other dressings, securing around $20 million in annual sales, according to NFE.

DM this post to your favorite brunch spots. Let them know you’d like to see #JUSTEgg on their menu! – Hey restaurants! You can DM us, email us (justegg@justforall.com), or go to ju.st/getegg

All across the globe, the vegan egg and egg replacer market is expanding, and expected to be worth $1.63 million before 2029.

But you don’t have to be a Silicon Valley startup to experiment with vegan eggs. Reena Sharma, the Instagrammer behind food blog “Food Flaneur,” creates her own vegan soft boiled eggs using tofu and agar, complete with runny yolks.

With the booming popularity of vegan alternatives, growing consumer unease at the treatment of the animals, and irritation at growing prices, the chicken egg industry appears to be on its way out. As NFE says, “Eight-billion-dollar industries do not disappear overnight, but when conditions change, they sometimes wither surprisingly fast.”