Dining has evolved into far more than a simple means to an end; we go out to eat to socialize, try new foods, nourish our bodies, and partake in an experience unparalleled by our kitchen table at home. Cafe Gratitude, an elevated Southern California vegan restaurant chain, takes the dining experience to a new dimension. Guests are encouraged to embrace the notion that life is beautiful and to share their positive feelings with their waiter and fellow diners. The concept, according to Chief Inspiration Officer Ryland Engelhart, is to find everyday glimpses of gratitude and recognize the many blessings we have in our lives, both big and small. Beyond this idea, Cafe Gratitude truly makes outstanding plant-based cuisine. LIVEKINDLY sat down with Engelhart to discuss the restaurant’s unique mission, the food, and what he is grateful for.

Engelhart began by explaining that Cafe Gratitude did not start out as a restaurant; it began as a game. His parents, Matthew and Terces, set out to create a Monopoly-style board game that would “allow people to tap into their awareness and serve as a reminder that every moment we have is an opportunity to put our attention somewhere positive.” The Engelharts created the game and debuted it at a “transformational gaming parlor” where they also served raw plant-based food. Engelhart explained that he grew up in a “health-conscious family,” and this diet eventually led them down to the path to developing nutritious, plant-based food. 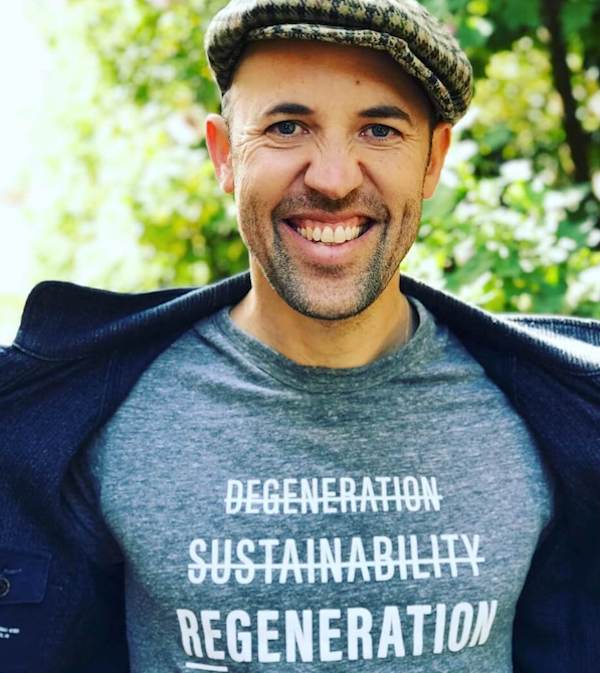 In 2004, the gaming parlor transformed into the first edition of Cafe Gratitude in San Francisco with the idea of food as a vehicle for gratitude firmly in place. “We’re not only curating our food,” Engelhart said, “but also creating that potential conversation about what’s blessed about our lives. Being grateful over food is probably one of the oldest tradition to date, so our mission became bringing and experiencing gratitude and love and sharing that through our restaurant and through our food.”

Eventually, the restaurant migrated to Los Angeles, where the first Cafe Gratitude we recognize today was born. The company went through a bit of a revamp thanks to Lisa and Chris Bonbright, who added both business acumen and “savviness” to the brand. The flagship location in Larchmont Village just celebrated its seven-year anniversary, though the company has expanded into several locations across Los Angeles, Orange County, and San Diego.

While the original concept served raw food, the restaurants today have branched out to cater to a wider audience. However, Engelhart affirmed that the food philosophy is still tied to the old adage, “let medicine be our food and let food be our medicine.” The menu does offer the occasional buffalo cauliflower appetizer and truly decadent breakfast crepes, but the founders still pay attention to sourcing and preparation. “We’re deeply connected to where our food comes from,” Engelhart remarked. “Everything starts from a whole food.”

Further, the company actively supports not only responsible sourcing but regenerative agriculture. The brand purchases all of its corn (which is used to make its house-made tortillas and chips) from the Vetter family farm in Nebraska. The farm practices what Engelhart calls “the most sophisticated farming in the country.” The Vetter farm was one of the first to go organic, but it also contributes to regenerative agriculture by producing rich topsoil. “Every order of nachos, tortilla chips, tacos or quesadillas,” Engelhart explained, “[supports] sustainable agriculture.”

It is this relentless dedication to sourcing that explains why their carnitas mushroom burrito costs about 75 percent more than a burrito you could get at Chipotle. The restaurant has received pushback for its pricing, but many of the commenters are unaware that they are comparing apples to oranges. Most fast-causal concepts do not use the gold standard of organic produce, and Cafe Gratitude will not sacrifice its product for the sake of reducing food costs. 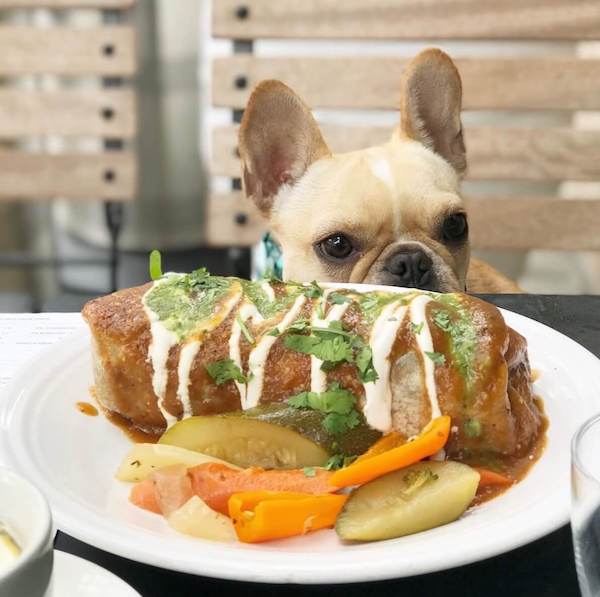 Another aspect of the company that has received significant attention, both good and bad, is the menu affirmations. Each dish is named after a positive affirmation, such as the Giving (the seasonal pizza), the Humble (an Indian-inspired Buddha bowl), and the Liberated (raw pesto kelp noodles). Diners are encouraged to order by saying “I am” followed by their entree choice. For example, to order the coconut ceviche appetizer and the enchiladas, one would say, “I am Brilliant and Elated.” Some guests are thoroughly entertained by this notion, whereas others have described it as pretentious. To the critics, Engelhart says, “Thank you for sharing your opinion – the affirmations actually came before everything else. Our affirmations are why we’re in business, it’s there to remind people and to inspire people to be grateful and love all that we have. I hear people’s opinions, and everyone is entitled to their own opinion, but I know why we do them, and I stand by the way they make a difference. Gratitude is in our name and it’s why we exist – to bring gratitude and community to a restaurant environment for all people.”

Grateful or not, even the nay-sayers seem to keep coming back for the food. Cafe Gratitude has been seen as a gateway for non-vegans; it is a well-known spot for both vegans and omnivores to enjoy food together, as the dishes are consistently varied and excellent. Engelhart mentioned that even though the menu rotates seasonally, a few have remained throughout the years. The “I Am Cool,” a mineralizing chocolate chip mint shake, has been a number one seller for the past twelve years. Personally, Engelhart loves the “I Am Whole.” It’s a macro bowl with braised garnet yams, adzuki beans, sea vegetables, sautéed greens, kimchi, garlic tahini, and brown rice or quinoa. “It feels nourishing and filling yet delicious and healthy on all levels,” he claimed.

The interview concluded with the obvious yet essential question – what is Ryland Engelhardt grateful for? “I am grateful that my wife is 8 months pregnant, and that I will soon experience the great mystery of fatherhood. I’m grateful that I’ve had the opportunity to be a son and can give that experience of care, support, and love to another being in the most deep and intimate way. I’m also grateful for the gratitude and love that we’ve grown and spread through our Café Gratitude brand to really show people our purpose and our mission.”

He continued, “As humans, our mind inherently tells us ‘I am not good enough’ or ‘I am lacking this or that’– [at Cafe Gratitude] we try and counterbalance that through transforming and reversing negative thoughts we oftentimes say about ourselves and in turn use the restaurant as a way to remind ourselves of these positive reinforcements of who we really are.”

Note: Ryland is now a proud father of his new son, Rumi.